Share All sharing options for: You're On Notice, Dawg! Outback Bowl Edition

Well, 25 days have passed since the Dawgs last played a snap in anger (as they say in soccer parlance), and it's once again game week! I normally post my "On Notice" article at the beginning of game week, but it's been a bit crowded posting-wise over the last few days with Christmas, bowl season, and the SEC schedule dropping, then not dropping, then finally dropping warm and pillow-like into our laps, and this was really the first window of opportunity that was available. Late is late, however, and for missing my normal posting window, I will make myself the honorary first "On Notice" recipient this week. I really need to step it up, man.

But on to the game! As most of you are already aware, the Dawgs will be taking the field in 5 days on Monday, January 2, against the second-best team in the B1G this season, the Michigan State Spartans. Georgia is 2-0 all-time against Sparty and undefeated all-time against the B1G in bowl games, but that record is going to buy us exactly zilch once the ball is kicked off. Michigan State is an excellent team, and we will need to play one of our best games of the year to emerge victorious.

Therefore, I'm letting the following people know that, for the 2012 Outback Bowl, You're On Notice, Dawg!

1) Michael Adams - Why Michael Adams? Because he's a jerk, has stolen money from and is a disaster for University, and everybody that has ever worked with him hates him. Plus, I have it from a very authoritative source inside the UGA administration that he personally arranged for Georgia's practice facility in Tampa to be changed to the following venue:

Yes, this is the actual venue at which the Georgia Bulldogs will be practicing in Tampa. (This picture has been lawya'd)

2) Georgia's rush defense - Michigan State's top two running backs have combined for 1500+ yards this season. For the Dawgs' defense to continue being as dominant as they were in 10½ of Georgia's 13 games, they must stop the run.

3) Isaiah Crowell - I came under fire for my treatment of Crowell in my post-SEC-Championship-Game post, and perhaps not without some merit. The fact remains, however, that for one more game, Isaiah Crowell is the best running back we have. Boo Malcome has been installed at the #1 spot basically because he's earned it, but if our rushing offense is to be successful against the the state of Michigan's "other team," Crowell will still need to be at full-speed for most of the game.

4) Mike Bobo - The Spartans are a lot like Georgia on offense in many ways, except they don't "shut it down" when they've got a 14-point lead. They keep their foot on your throat when they have a lead, which is why it will be vital for Coach Bobo to leave any green articles of coaching paraphernalia in his office when he packs for the trip to Tampa. 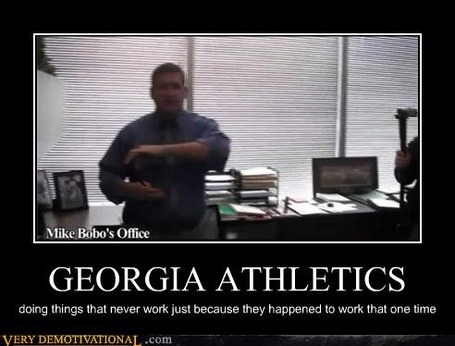 5) Aaron Murray - Our outstanding QB successfully avoided a sophomore slump this year, but is still prone to moments of sheer boneheadedness. (Yes, that's a word. Look it up! But not now... finish reading this article first. Then maybe you'll forget to look it up. Oops... I mean... forget that I just typed that last part.)

Aside from exactly 3 drives in the SEC Championship Game, our offense has been extremely anemic for virtually all of our last two games. We put up a lot of points against the Engineers in our final regular season game, but all of those points were scored on short-field situations set up by the defense and/or special teams. In fact, we started one of our drives with the ball on the Tech 25 yard line and ended up punting the ball back to the Jackets.

To defeat the Spartans, our attack must be far better coordinated than is has been at times this season. Of course, if Murray plays as well as he did during the Auburn game, we'll be just fine. Just fine, indeed. 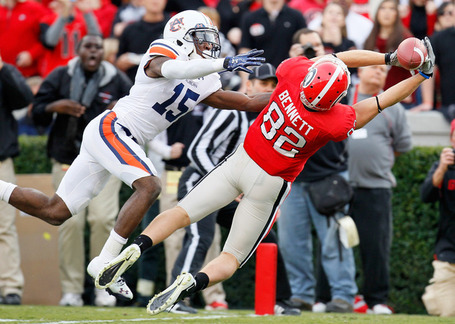 Of course, some fantastic, athletic receptions in the endzone wouldn't hurt, either.

6) Mark Richt - Dude. If this was the best beard you could manage, I wouldn't publicly admit it.

Just promise to shave your head next time if Georgia wins the SEC. That look is much more acceptable...

7) Whichever conference send the officials to this game - Over the past 3 years, the Outback Bowl has been officiated by crews from the ACC, Big XII-ish, and Big East-ish, respectively. Honestly, I don't really care which conference sends officials to the game this year, just as long as: a) it's not the Pac-12, which might be the only BCS conference with worse officials than the SEC, and b) none of the men on the crew take any phone calls from Penn Wagers beforehand.


On the other hand, I freely admit that this series of events has been one of the highlights of my bowl season thus far. Finally, the entire world understands what every Georgia fan has known since the 2007 Florida game: Penn Wagers is a horrible, horrible referee.

8) The Michigan State Spartans - In spite of all my hand-wringing above, I'm still putting Sparty on notice. You guys might have the better team this year, and you might even beat us. To emerge victorious from this game, however, you're going to have to fight a damn good Georgia team, and you're going to have to bring it for 60 full minutes. And do something about that whole "being the little brother in your own state" thing, too, ok? I mean, geez... we'd much rather be playing the other team from the Wolverine State, even though you guys are much better than them this year. And they're the one that went to a BCS bowl. What's up with that? (And it ain't called "The Spartan State" either... just sayin'.)

Finally, the appropriately-named role of Sir Not-Appearing-In-This-Article is being played by Jarvis Jones. By loudly and fervently announcing that he's coming back to settle some unfinished business next year and openly encouraging his fellow defenders to do the same, he's proven that he's a Bulldog for good, and that ain't bad!

That's all I have for now, Dawg fans... let's all be cheering our heads off for the Dawgs from either our seat in Raymond James Stadium or in front of our TV's on January 2 starting at 1:00 PM Eastern! May the best team win (and if that doesn't happen, I hope Georgia wins)!