And here we are, in control of our own destiny...the proverbial Driver's Seat.  I have to admit that I'm not too terribly surprised.  After the effort the Georgia Bulldogs put forth in the loss to South Carolina back in September, we could see real talent and potential.  The fact that the path to the SEC East glory is paved in mediocrity didn't hurt, either.  And you know what?  That ain't our fault.  That's how things sometimes work out in this or any conference and the fortunes of the "East" vs. the "West" are as cyclical as anything, I suppose.  Right now, the West is dominant and this gets no argument from me.  However, to win the East one must still get from point A to point B without tripping up somewhere along the way, and we aren't there quite yet.  We've still got some big issues on this team; special teams, personnel (personal?) decisions and such.  To date, we still have not played a complete game in all three phases.  At times, play calling has been questionable.  At other times, the play calling has been perfect, but the execution hasn't been there.  This team - for all of it's faults, warts, hiccups and occasional bouts of derpitude - is trending in the right direction.  The defense is, without a doubt, our strength and the foundation for which any future greatness will be built.  Our offense still lags behind, but there is some serious talent on that side of the ball, too.  However, defense wins championships, or at least over-hyped 8:30 CBS kickoff times.  Bama and LSU pretty much confirmed this last Saturday.  Defense, baby.  (And, in 'Bama's case, a kicker.)  Back on point.

I was going to write something clever about how much I hate our next opponent, but this has been covered far beyond what I could add.  What I will discuss is something that every generation of Dawg should know:  No matter how good you may be feeling about whatever edition of the Georgia Bulldogs are currently teeing it up, Auburn has found a way to royally screw it up for us.

You can talk about revenge, and we've got plenty of motivation for that heading into Saturday's game.  You can discuss about how well our defense has been playing of late or how we've suddenly found depth at receiver and running back (I did not just say we've got depth at running back).  You could talk about how a frog wouldn't bump his ass every time he jumped if'n he had himself a pair of wings.  You could say that a bird in the hand basically guarantees a handful of bird poop.

Friendly rivalry my a**

From the deepest desires often come the deadliest hate.

Socrates (UGA walk-on RB during the first Georgia-Auburn meeting in 1892.  Okay, I made that up.)

Folks, it's the Deep-South's oldest rivalry.  Hate is just a natural by-product.  I hate Auburn.

I remember watching  the pre-game show before a Georgia-Auburn matchup in the late 80's.  I was watching it with my mother and the interviewer had just spoken with Bo Jackson.  Now Bo had some wonderful things to say about Georgia and at the conclusion of the piece, my mother actually said to me, "You know, it really is a friendly kind of rivalry."  How I remember this kind of minutae, I haven't a clue.  It took me 15 minutes to find my car keys this morning, but I remember some obscure interview from 1988.  The brain is a scary damn thing, at least mine.

At that point, I nearly spontaneously combusted.  This rivalry is not friendly.  Just because we've got this weird football symbiosis going on between us actually makes it dysfunctional, in my humble opinion.  Anyway, I reminded my mom about how many times Auburn has broken our hearts and this was years before much more recent history had yet to be written.  Mom has come 'round.  She hates Auburn, too.

Auburn lives to ruin the day.  Here are a few reminders:

1978 Wonderdogs.  A 22 - 22 tie.  In my experience, this is the worst tie ever.  We were in great position to actually win the Conference that season and Auburn ties us.  This was very similar to the 2011 Dawgs:  Overcame an early loss to South Carolina, had beaten Florida a few weeks earlier and was rolling.  Then, we go down to the the Loveliest Village and trip up against a mediocre Tiger squad that would finish the season 6-4-1.  I hate Auburn.

1983, AH (After Herschel).  Auburn 13-7.  We had tied Clemson earlier that season for the only blemish on our record to date.  We had just upset a very talented Florida team 10-9 the week before and were poised to win our 4th consecutive SEC Championship.  I really wanted to win this game.  I wanted to win the SEC Championship again because we didn't have Herschel.  We had a great defense and a mediocre offense (sound familiar?) that eeked out close wins against Mississippi State and Vandy earlier that season (sound familiar)?  This game was on aired nationally on ABC.  I've mentioned this before, but the funniest thing I ever saw was a huge sign hanging across the top of the Chemistry building that said, "Go Dawgs.  Barium."  Classic.  God, I miss school.

Anyway, Auburn scored early and held on despite a valiant comeback effort on our part.  Pat Dye would later say he was thankful the clock ran down because if Georgia had any more time left, he had no doubt they would've scored.  This one stung.  It stung because it costs another shot at an unexpected championship and, as it turned out, a possible shot at a National Championship.  We would later beat Texas in the Cotton Bowl (what time is it in Texas?  Ten to nine....) which would pave the way for the University of Miami to win their first ever National Championship later that evening.  Texas had been ranked #1 in most of the polls and were undefeated.  Did I mention to you that I hate Auburn?  Hate 'em as much as mosquitoes.

1985 (Bo runs wild).  Auburn 24-10.  Sorry if this blog is taking on a depressing tone, but that's the point.  All you need to know about this game is that Bo Jackson ran all over us Between the Hedges.  We still had an outside shot at the Conference Championship, but would stumble down the stretch after the Tigers whipped us.  Hell, we'd lose to Tech in Atlanta in two-week's time as the mid-80's mediocrity really began to set in.

1988.  Auburn 20-10.  We actually had a shot at the Conference title again this year.  Auburn had this guy named Aundray Bruce who liked to tackle and masquerade as a first-round draft pick.  He also liked to point a gun (okay, so it was an air-rifle, but still) at a pizza delivery guy.  I guess it wasn't DiGiorno.  Anyway, we got up on Auburn early, but ended up losing in Vince Dooley's last matchup against the Tigers.  You know, I like driving in my truck.  And Auburn sucks.

1997.  It was pretty much over after the kickoff.  Remember the opening kick?  Hines Ward got a concussion and basically couldn't play the rest of the way.  Now this was a Georgia team that had just thoroughly whipped Steve Spurrier's Gators two weeks earlier.  Hmmm?  Two.  Weeks.  Earlier.  Sounds familiar, no?  I nearly cried as I watched this game on the World Wide Leader with my soon-to-be bride who is from England and couldn't understand, for the life of her, why anyone could ever get so upset over a college football game.  She didn't understand then, and she doesn't understand now.  It's probably just as well, because in a strange way, it creates some balance in my life.  We lost this game 45-34 and it wasn't even that close.  Auburn won the West that season, then lost to Tennessee in Atlanta.  You know what I hate, besides traffic jams and politicians and light beer?  Auburn.  That's what.

2004.  Auburn 24-6.  I don't like ever pointing out a Georgia player who screws up in a big game, but we had a guy kicking footballs that year who really cost us in this one (Sound familiar)?  Oh, and how many games would the SEC suspend Junior Rosegreen if he did what he did today?  O.K. Bad question.  Just damned dirty football right there...and nearly tragic. 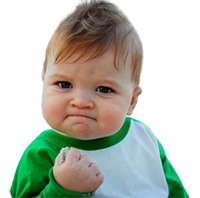 Who hates Auburn?  This guy.

2005.  Auburn 31-30.  I don't think I really want to discuss this one much.  We lost because of a flukey play, late.  In my mind, it marked the beginning of the next Ice Age, a.k.a. "The Age of Willie."  We still won the Conference, but it's just another stark reminder of what happens in this rivalry.  Again, this wasn't a great Auburn team by any stretch...but in this series, it really doesn't matter.  Hate Auburn early and often.  You can't be too sure.

2010.  Again, no need to reinvent the wheel (route).  Auburn won the dirtiest game I've ever witnessed, bar none.  Yeah, we all want revenge.  But it's a dangerous thing because you could find yourself guilty of playing the same way as the offender did to put you in this state in the first place. 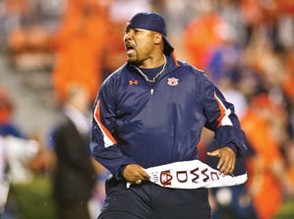 Auburn's Trooper Taylor.  We like to call him Dick.

Folks, this is just a little bit of reflection to hopefully temper anyone who honestly believes we should be a 12.5 point favorite (or whatever the Vegas line is today).  This thinking is absolutely cracked.  This game is dangerous.  I know it, you know it (I hope) and I pray our players know it.  Last week was essentially a "bye" week for at least a half of football.  We took care of business without getting anyone hurt.  We seem to be trending in the right direction. Let's do this.

Feel free to chime in on any of the above lessons in reality.  If you have your own memories or lessons you'd like to share (win or lose), have at it.