Share All sharing options for: Previewing the SEC Championship Game with Les Miles. 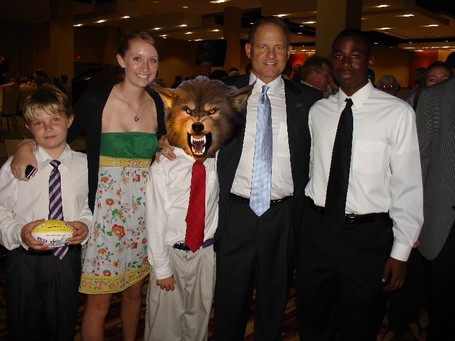 Louisianans see nothing unusual about this picture. Find out why after the jump.

Our guest on this morning's SEC Championship Game preview needs no introduction. But we'll give him one anyway. Some cowboys wear white hats. Some wear black hats. Some wear oddly tall hats and can't keep track of time worth a tinker's cuss. Les Miles is that last type of cowboy, and herein I faithfully reproduce for you my recent interview with one of the thirty or fourty craziest S.o.B.s in Baton Rouge.

MaconDawg: Coach, thank you for taking the time to sit down with us.

The Hat: My pleasure. What position do you play again, son?

TH: We call our weakside safety/linebacker hybrid "Clarence." Named after an Indonesian boy who saved my life once. No idea what his real name was, but Clarence seemed about right.

MD: Brilliant. Can I ask you a few questions?

TH: Anything son. I'll tell you whatever you need to know to put your mind at ease about your decision to attend Louisiana State University.

TH: Just do me a favor and don't move into your dorm room before I give you the all clear, ok? Might have to, um, clean it out first.

MD: No problem. So coach what do you believe is your greatest accomplishment in coaching?

TH: Well it's certainly tempting to say my 2007 national championship here at the Louisiana State University. And of course there was that highly successful run at Oklahoma State. Let's face it. Before I got there, those folks hadn't won anything of consequence since Grandma wore bikinis. And ole Boone Pickens was throwing money down a dark hole, which was a nice change of pace from his prior gig pulling cash out of dark holes. But I'd say my biggest accomplishment was convincing America that Jarrett Lee is an actual college football player.

TH: I don't think I've ever actually told anyone this before, but the guy y'all have been writing about and call "Jarrett Lee" doesn't actually exist. He's a character played by television's Jim Parsons during breaks from filming of The Big Bang Theory. When you're the ice cream in a recruiting Klondike bar surrounded by Auburn, Mississippi State and Texas A&M, hiring Hollywood actors is cheaper than entering the market for actual bluechip prospects.

MD: That might explain the limp wristed delivery and occasionally frayed nerves. But still, pretty convincing.

TH: Not as convincing as Elizabeth Banks was in the role of Herman Johnson. That's versatility, by God. Gal really lived the part. The Parsons kid's not bad. But boy when he got here he was a little bit of a project.

MD: What is your biggest fear? Failure? Trouble handling success? What you'll do when the cheering stops?

TH: The fear of turning into a werewolf, the word comes from the greek . . .

MD: Sadly I know what it is, I just don't know why in the hell you're afraid of turning into a werewolf.

TH: Because turning into a zombie is so overdone. Kidding! Actually I wasn't afraid of lycanthropy until recently. Never saw any in Stillwater. Down here in Baton Rouge the fuzzy bastards are everywhere though. Some folks don't even notice 'em. Blend right in.

TH: What, you thought Glenn Dorsey was that big and fast naturally?

MD: Glenn Dorsey was a werewolf?

TH: Not originally. He was actually bitten in his sleep by Jamarcus Russell during his freshman year. I warned him about coming back to campus smelling of Raising Cane's chicken fingers. That stuff's like catnip for werewolves. Oughtta call it "werewolfnip".

MD: Sweet Jesus please stop talking! So what is the forecast for the Bayou Bengals this Saturday? Everyone seems to think your squad has nothing to worry about.

TH: Forecasts's cloudy with a chance of etouffe, Cochise.

MD: I don't understand. Like, even less than the werewolf thing.

TH: Oh, I'm just kidding. Drives people nuts when I speak in riddles like that. Plus I've learned that if I just pepper my statements with references to Cajun or Creole cooking these folks go nuts. Gumbo is like catnip for 'em. Oughtta call it Cajunnip.

MD: I swear to God if you say anything about trying to find the nips on a Cajun . . .

TH: Hah! Had you going there blog boy! By the way I know exactly what a blog is. I've had a photoblog myself for years now, I was just faking you out. That's kind of my bit, you know? Unpredictability is my greatest weapon. Everybody thinks ole Les is crazy. I'm crazy like a fox.

MD: Wait, you have a blog? That's a little surprising. What is it called?

TH: I know right? I'm a pretty nuanced guy. People just don't get that about me. Take for example our offense this season. . .

MD: [To self, not wanting to detour back amongst the mammary glands of human/lupine hybrids] Thank goodness, actual football talk . . .

TH: Everybody thinks that we just bludgeon teams to death with Spencer Ware, Kenny Hilliard, Alvin Blue, and Faith Ford . . .

TH: Whatever. I'm rolling. In reality we also average 171 passing yards per game.

MD: That's not actually a lot. 100th most in the nation as a matter of fact.

TH: A lot? No, but it's danged sure enough to keep opponents on their toes. That's really all we're trying to do. It's also worth noting that Jarrett Lee and Jordan Jefferson have combined to throw 19 touchdowns and only 4 interceptions. Put 'em together and you've got a halfway decent quarterback.

TH: Damned skippy. Basically in the passing game it's about getting Reuben Randle open. Kid averages 18.5 yards a catch so it's not like we have to get him open that often. Still he's got 48 catches, which is more than either Malcolm Mitchell (34) or Orson Charles (40). Odell Beckham isn't bad either, especially for a freshman. He's capable of making things happen if Grantham's defense is able to shutdown Randle. Which won't be that easy. You'd be surprised how many ways there are to get the same wide receiver open.

MD: So on defense LSU is historically known for a talented front 4. But this year a lot of the talk has centered on Tyrann Mathieu and Mo Claiborne.

TH: Honey Badger doesn't give a shit! Sorry, I've been wanting to say that for weeks. Verne Lundquist and I have that in common. Much like a certain night in Marrakesh that we don't talk about. Anyway, Claiborne and Mathieu are as good a pair of corners as we've had. Peterson was pretty good, but I couldn't play him on both sides of the field at the same time. Having that kind of double-barreled shutdown power allows my man Chavis get creative in the blitz schemes. Plus it helps out a lot with that whole "3rd and Chavis" thing he had going on in Knoxsville. Good luck getting open on 3rd and 15 against those two.

We don't so much have a front 4 as we have a front legion. Chavis plays as many as 10 guys per game. Only one of them is named Barkevious Mingo, though. So that's a downside I guess.

MD: So is there anywhere your defense is vulnerable?

TH: Oh I'm just pulling your leg kid. If there's anything on that side of the ball that worries me it's our linebackers having to cover Orson Charles in space. Or that Bennett kid you guys have. We're pretty fast at linebacker, but those guys are not made to go man-on with speedy receivers.

MD: So what does Georgia have to do to beat you?

TH: Aside from hoping for lycanthropy? Turnovers wouldn't hurt. Of course Petrino's boys had a fumble pop right into their hot little hands, returned it for a touchdown, and still had that beady eyed little bastard cussing at me at the end there. So there's no silver bullet, if you'll pardon the pun.

TH: Really the best you can hope for is to come out hot and for us to finally succomb to the pressure of playing for it all. If Murray is on and can strike deep to King and Mitchell you may be able to put up some points. Didn't work so well for Arkansas with Joe Adams and Jarius Wright, but knock yourself out. Nobody's scored more than one offensive touchdown against us all season. If that doesn't scare the crap out of you, you're nuts. And I know from nuts. Mark my words: if Aaron Murray comes out pressing like he sometimes has in big games the past couple of years, you could be in a deep hole in a big hurry. But it really comes down to the defense. I know you guys are proud of that defense of yours, especially against the run. And you should be. They've been the foundation of a damned strong football team this season. But this is gonna be their biggest test so far.

MD: Yup, win, lose or draw it's going to be quite a matchup.

MD: Thanks, Coach. And watch out for the werewolves.