You're On Notice, Dawg! Championship Week

Share All sharing options for: You're On Notice, Dawg! Championship Week

Ed. Note: I was planning on doing this feature even if Georgia did not participate in this week's activities... but it's so much sweeter that we are. As a result, I am including more than just Georgia-related items in this week's list. (Besides, we all know what Georgia has to do to win this week: serve the LSU team tainted food at their pre game meal.)

Well, Dawg fans, we've arrived at the penultimate stage of the college football season: Championship Week. While the Miami (Florida)'s and the Miami (Ohio)'s of the world have concluded their seasons and are turning in their equipment, the Michigan's and Marshall's of the world are kicking back and waiting to find out to which bowl they've been invited, and the LSU's and Georgia's of the world are gearing up to play another game to determine who will be able to call themselves 2011 Conference Champions.*

Please allow me to immediately burst your bubble, however, regarding the SEC Championship Game. The question this week is not whether the Dawgs will lose to LSU; it's by how much they will lose. Is it technically possible for Georgia to win? Well, sure... but it was technically possible for Auburn to win when they played us two weeks ago, too. As long as you're on the field, you have a chance to win. But LSU is simply too good from top to bottom for us to entertain realistic dreams of a Bulldog victory. We should be happy with our 10-win regular season and berth in the SEC Championship Game (and, about that, I am ecstatic). As for the game itself, we should simply hope that we can make it look good against the Bayou Bengals, because not many have this year.

With that stark realization in mind, I would like to let the following people know that, for Championship Week, You're On Notice, Dawg!

1) Michael Adams - Why Michael Adams? Because he's a jerk, has stolen money from and is a disaster for University, and everybody that has ever worked with him hates him. Plus, I have it from a very authoritative source inside the UGA administration that he's been lobbying hard to suspend Mark Richt for one game because he allowed Branden Smith to play too many snaps on offense yesterday.

2) Aaron Murray - I know we scored 31 points against the Golden Tornado, but none of those points were scored after a long, sustained drive. In fact, we started one of our drives with the ball on the Tech 25 yard line and ended up punting the ball back to the Jackets.

Aaron Murray's accuracy was horribad yesterday, and there were at least 3 of his throws after which I remarked to one of my relatives, "That's a pick-6 against LSU, or an interception at the very least."

As you'll read about more in the next point, we have to score points against LSU if we are to have any hope of defeating them, and scoring points is exactly what they are good at keeping the opposition from doing. We need a quarterback who makes good decisions and accurate throws this Saturday... and that can be Aaron Murray on a good day. It was not the Aaron Murray of yesterday, though. 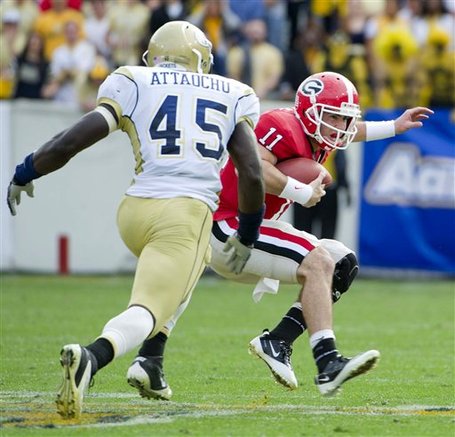 For example, a knowledge of when to throw the ball away is a good thing to have against the best defense in the country.

3) Georgia's Defense - I'm not putting the defense on notice because they've come up short in any way. In fact, their performance is the predominant reason that we have now once again won 10 games for the 7th time in the past 11 seasons. Georgia's defense has been the brightest shining light in the 10-game winning streak upon which the Dawgs are currently embarked.

If we are to have even the faintest hope of stretching our winning streak to 11 games, however, our defense must play their best game of the year this Saturday. They have to play their minds out and not make stupid mistakes or draw stupid penalties. But foremost, however it happens, our defense has to hold the LSU offense to less than 17 points.

There is no way that we're going to outscore the Bayou Bengals in a shooting match, and the Tigers have only given up more than 17 points twice this year (and both times early in the season): in a road trip to Morgantown against West Virginia and the in first game of the year against an Oregon offense that is light years ahead of ours.

Our offense is going to be doing good to score anything at all, so for us to have any hope in this game, the defense must hold LSU to as few points as possible. 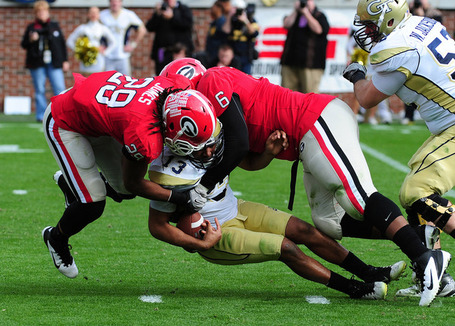 As was often said earlier in this season: We need more DAWGS and less Cats on Saturday.

4) Rick Neuheisel - Just as Gary Barnett was fired after leading Colorado to their second consecutive Big XII Championship Game in 2005, so will could Neuheisel be let go after leading UCLA to a spot in the inaugural Pac-12 Championship Game. If you have to ask why, you haven't been following college football very closely over the past few years. If Rick wants to stick around, though, he would be well advised not to get thumped 70-3 as Barnett's 2005 Colorado team was. (His season-ending 50-0 thumping yesterday at the hands of Southern Kiffin Cal probably didn't help, either.)

5) The Oklahoma Sooners - "... so like I was saying, Coach Stoops... Oh, not at all, Bob. Of course your team still has a chance to go to the national championship game! If you guys beat Oklahoma State, you're practically in! Oh, don't worry about LSU, Georgia's going to beat them anyway. It would be an honor to line up across the field from you guys in New Orleans."

-- Nick Saban, in a phone conversation this week with Bob Stoops

6) People who value sane head coaches - Ok, Mark Richt is coaching in a championship game this weekend... but so are Les Miles, Chip Kelly, Rick Neuheisel, Brett Bielema, and a guy named after a Ferengi game in Star Trek. Our coach might be back on the ascent, but this is definitely not a year where conservative, calm coaches are among the most successful.

U MAD, SANE PEOPLE? (This picture has been lawya'd)

7) The Ohio (Ohio) Bobcats and the Northern Illinois (Illinois) Huskies - It is a virtual crime against humanity that our MACtion championship game is not being played on a Tuesday night. For that, I will never forgive those BCS bigwigs or their puppets at ESPN.

Tuesday night's alright... for MACtion! (Come on, it's the Mid-American Conference. What better time to air it than the middle of the week?) (This picture has been lawya'd)

8) The Big East Conference - If Cincinnati can pull down mighty UConn this weekend, they will win the Big East. If not, the Louisville juggernaut will emerge victorious. Sadly, I'm not talking about basketball... I'm talking about which team will actually earn a bid to a BCS bowl. (And if I'm wrong and someone corrects me, I will point and laugh at them for knowing the difference.)

BONUS) The Florida Gators - The University of Florida made an ultra-classy move and held a moment of silence for Larry Munson before Saturday's game against Florida State. I'm putting the Gators on notice, because dang it, if you make me start to hate you guys less... (voice trails off)

The appropriately-named role of Sir Not-Appearing-In-This-Article is being jointly played by all of the perfectly rational, reasonable Tech fans like those at Sting Talk who want to fire Coach Paul Johnson in the wake of yesterday's game. Yeah, right on, man. You guys totally need to get that loser out of there.

Finally, please don't mistake my stark realism vis-a-vis the Dawgs as negativity. I will be standing in the Dome on Saturday night, screaming my head off for the University of Georgia, and I will be hoping as much as anyone that they emerge from the game as the SEC Champions. A healthy dose of realism going into the game, however, will help to keep you from saying things after the game that will make you sound stupid, like "Mark Richt just can't win the big one, PAAAAAWWWWWWLLLL."