In some ways, it doesn't seem like 3 months has passed since the 2011 college football season began. In other ways, however, our losses in weeks 1 and 2 seem like a year ago. Here we are, though: this week holds our final game of the regular season against the Engineers from Atlanta.

I have to be honest: I'm very nervous about this game. We have a huge game against LSU or Alabama coming up in the Dome, and Tech has a good team. We can't sleepwalk through this game, or we'll get our butts handed to us. In addition, I will add the following disclaimer: I have been busier than usual this weekend, and haven't been online virtually at all since Friday night, so I apologize if I cover an area that has already been covered ad nauseam.

This is a big week for the Dawgs... everybody has a different team they hate the most, but Georgia Tech is the team to whom we virtually all hate to lose the most. So, I'm letting the following people know that, for Clean Old-Fashioned Hate week, You're On Notice, Dawg!

Sadly, the on-notice board generator appears to be gone for good. I'm trying to find another solution, but I guess this will have to suffice for now! (This picture has been lawya'd)

1) Michael Adams - Why Michael Adams? Because he's a jerk, has stolen money from and is a disaster for University, and everybody that has ever worked with him hates him. Plus, I have it from a very authoritative source inside the UGA administration that he's pushing Mark Richt to suspend all running backs for the rest of the season, 'cause he finds their constant injuries and suspensions disrespectful.

2) Isaiah Crowell - See, this "Crowell" guy is kind of a good news/bad news story. The good news is that he's a talented back who can light up defenses by making stellar runs out of seemingly nothing. The bad news is that he apparently can't do it for more than a few plays a game, then he gets injured and has to leave.

This is not good... really not good. Our offense is based on running to set up the pass, and if we can't run the ball, we look like we did yesterday against Kentucky. We have to have a running game to beat Tech, and if Crowell and Thomas can't effectively team up in the SEC Championship Game, we might as well just stay at home and forfeit, because it would be a less embarrassing way to lose. (And don't believe the hype about Richard the Intravenous. Even if he could play in the SECCG, he wouldn't be anywhere close to 100%.) 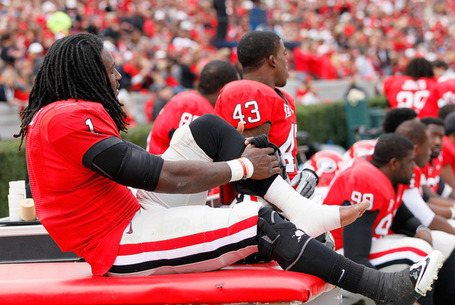 This is not what was intended.

3) Tackling - Just about the only criticism I have levied over the last 11 weeks at our defense is their sustained propensity towards bumping a guy and hoping he falls down. We like to gang-tackle a lot of defense, and the "bump and drop" strategy works when you can do that.

Against Georgia Tech's option attack, however, you have to play assignment football, matching up 1 defender with one potential ball-carrier. This means that your defenders have to make good one-on-one tackles, which means you have to wrap the guy up and make a fundamentally sound tackle. We saw what happens when we try to "bump and drop" the guy in 2008. (Hint: It didn't work out too well for the good guys.)

Our defense has been dominating all year against the run, but Tech has no ordinary rush offense. How we perform in the face of the many one-on-one tackling situations we see will decide whether we win the game. 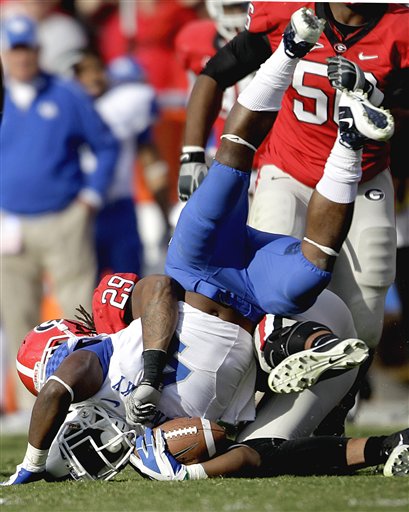 A big thank you goes to Jarvis Jones for providing this example of the correct tackling form.

4) The blocking of our offensive line - There's no way to sugar-coat this one: our blocking sucked out loud yesterday. I know that Brandon Harton is kind of like Carlton Thomas, except half the power and half the speed, but we still didn't block worth a crap for him. On the one drive the line blocked well, Harton ran up the middle virtually untouched for huge chunks of yardage. The rest of the time, however, they neither run-blocked nor pass-blocked well.

Aaron Murray was under fire all night, and Brandon Harton and Boo Malcome didn't have any holes through which to run. This seems to be the offensive line's only two responsibilities, so they need to really pick it up this week. If we can't run, we can't pass. And if we can't buy Murray 3-4 seconds in the pocket, we really won't be able to pass.

5) People who are saying Georgia should be part of the national championship picture - Dude. Dude.

I hope our performance against Kentucky has knocked the irrational exuberance out of whomever is making these claims, but just in case it hasn't, please allow me to burst your balloon. Georgia will not be playing in the national championship game.

Would we win the national championship game if we were to play in it? Maybe, but that doesn't matter. So many absurd things would have to happen for us to even be possibly considered that such a thought is patently absurd.

All of the following have to happen:

And, oh by the way... we still have to beat Georgia Tech and one of LSU/Alabama/Arkansas. That's a big enough hurdle, people. Let's just worry about clearing that one first.

By my count, I saw at least 2 phantom personal foul penalties, and there were lots of questionable calls. I mean, dang, we didn't even pull Penn Wagers' crew, but we still had to put up with this?

I highly recommend that before the Georgia Tech game, Mark Richt walk over to the referee and compliment the mother, father, and entire family of every game official, just to be safe.

(I will concede that our officials did not have the worst game of any set of SEC officials, however. I would have felt sorry for Vandy if their coach weren't a whiny, arrogant jerk.)

Could all of the officials that hate Georgia please raise your hand? (This picture has been lawya'd)

7) Mike Bobo - I hate to continue beating a dead horse*, but I was mystified by Bobo's inability to adapt his play-calling on Saturday. It was clear after the first half that Brandon Harton is just like Carlton Thomas without the speed and the O-line was not blocking for him, and yet Bobo kept calling plays that matched Harton up directly against the Kentucky defense.

Call a short pass play, a screen, or even a wheel route... something to take advantage of the fact that the top 4 ball-handlers remaining on the field are receivers/tight ends. Instead, Mike Bobo keeps running Brandon Harton into a brick wall and expecting that he'll be able to pick up a first down one of these days.

Repeat after me, Coach Bobo... get the ball to your best players. Period. With Crowell's propensity to get injured and Carlton Thomas' propensity to suffer a sprained cerebrum, we might actually be seeing Brandon Harton getting significant time against Tech and in the SEC Championship Game, so this is a theory that our offensive coordinator really needs to understand. 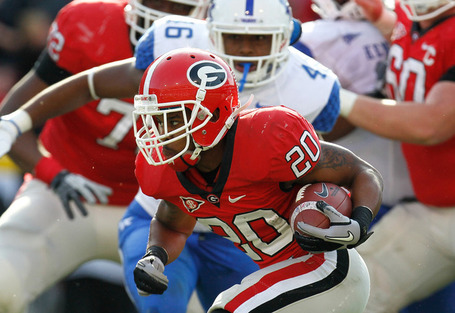 Look, we all agree that this kid has the heart of Rudy... but there was a reason that Rudy only played in two plays over his entire college career.

The appropriately-named role of Sir-Not-Appearing-In-This-Article is jointly being played by Coach Todd Grantham and Jarvis Jones. I hope we will still have at least one of them next season.

It sure would be embarrassing to prepare for the SEC Championship Game by losing to Georgia Tech, which would would then likely result in a 9-4 record before our bowl game. So let's be sure to tune in this coming Saturday at noon (or, if you're the kind of person who likes dives, head to Atlanta) and cheer our Dawgs on to victory against the Golden Tornado!