Share All sharing options for: You're (not) On Notice, Dawg! Week 12

I'm going to borrow Kyle's shtick on this past week's game: The only negative thing I can say about yesterday's game was that we didn't beat Auburn 51-7, like we have another certain rival in the past.

With that said, however, this is about as good as it gets, folks. We dominated our oldest and one of our most hated rivals from start to finish, and the game was essentially over in the second quarter.

I honestly can't find 7 negative things that require enough attention to be put on notice this week, and our game this week is against an SEC that is almost as bad as Western Kentucky. So, in honor of our landmark victory over the Tiglesmen, I'm going to do what I did after the Florida game and flip this column around, offering commendations to those that deserve it.

I'm letting the following people know that, for Week 12, You're (Not) On Notice, Dawg!

(This picture has been lawya'd.)
Sadly, the on notice generator website is still on the fritz this week. It didn't seem to affect the team for this last game, however, so I ain't gonna worry about it.

1) Mark Richt - The head coach gets blamed too much when the team loses, and he gets too much of the credit when the team wins. Still, for those individuals who were filling the comments at this site and others 8 weeks go with ignorant blather about how Coach Richt had "lost his touch" and had "let the game pass him by," I would like to offer the following exhortation:

2) Our Rush Defense - It's almost unfathomable how dominating our defense is against the rush. Anybody can have a dominating game, like we did in holding the Florida Gators to negative yards rushing. Our defense has been doing that over the entire season, however. We have, over the course of 3 entire games, surrendered 12 rushing yards combined to Tennessee, Florida, and Auburn. Since our inauspicious start, only 2 teams have managed to rush for more than 100 yards against us: Vanderbilt and New Mexico State (getting to that number in garbage time).

If we can keep shutting down the run like this, we can legitimately compete against anyone in the country. And you can bank on that. 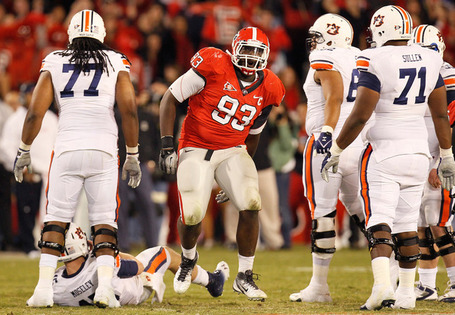 3) Bacarri Fudge Rambo - I have referred to Bacarri by his chosen name several times already since I symbolically took away his moniker in several earlier posts. Let this be the official notice, however, that Bacarri is now once again known officially to Dawg Sports by his chosen last name of Rambo.

I salute this man because he has steadily improved his game over the past 10 weeks. He has put in the work and effort to get better, and he put an exclamation point on that effort by stalking Clint Mosely silently, then springing to action, snagging the package, and delivering the goods to the house yesterday in the middle of the second quarter. His great play made the score 28-7 and virtually iced the game before it was even half over.

Here he is just before jumping in front of the Auburn receiver for his pick-6. (No, that's not pass interference. Shut up, hater.) (This picture has been lawya'd)

4) The coaches' handling of the kicking game - Mark Richt and (insert whichever coach is in charge of field goals here) have quietly decided over the last couple of weeks to alternate Blair Walsh and Brandon Bogotay on PAT's, kickoffs, and (apparently) field goals. This has paid dividends, as it has allowed Bogotay to get meaningful opportunities on the field while still not stripping Blair Walsh of all his confidence by sidelining him completely.

More than that, however, we have been able to handle our field goal opportunities in the best possible way... by scoring touchdowns instead, making our field goal woes irrelevant. Could our errant kickers cost us a game in the future? Sure... maybe. But they didn't cost us this game.

5) Aaron Murray - We all know that Murray hasn't exactly been the most accurate passer over the past couple of years. You would never have known it, however, from watching the Tampa native yesterday. Aaron consistently placed passes exactly where they needed to be on drive after drive. His receivers did a great job of catching the ball, as well, but this was easily Murray's best game of the year. 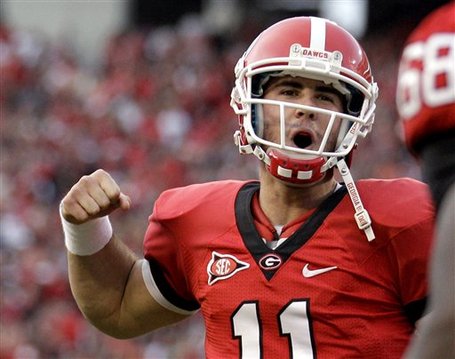 6) Carlton Thomas - Thomas has been much-maligned by Dawg fans because he is relatively small and has been poorly utilized in the past. He has obviously never given up or listened to his detractors, however, because he's developed into a back that is a solid role player in our offense. He had his first 100+ yard game yesterday, and it was because we ran him primarily around the periphery, where his speed and maneuverability are most effective. (Though I will admit that he did run up the middle a few times with success... a credit to our offensive line's run blocking.) 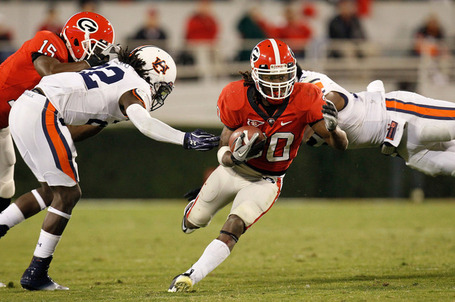 Congratulations on your 127-yard game, Carlton. You've earned it!

7) Todd Grantham - Do I really need to explain this one? Everyone hoped he could put together a defense that was more solid than that orchestrated by Willie Two-Thumbs, but this is insane. If we can hold onto Coach KTMFD for a few more years and get similar results, he'll be Coach Richt's version of Erk Russell.

8) The University of Georgia Redcoat Band - Easily overlooked in this epic beatdown is the equally epic battle that the Redcoats fought against the Fighting Tiglesman Band of Auburn. Normally, when an opposing team brings their band into Sanford Stadium (or when the Redcoats travel en masse), they follow an unwritten code of ettiquette that says you generally don't play over the other band's songs. Oh sure, both bands might play one of their short blurbs at the same time right before a key play or something, but during timeouts and other game stoppages, the "one at a time" rule is followed out of respect.

Following their stereotypical script, the Auburn band displayed the level of class we've come to expect from Auburn by trying to do two things early in the game: 1) Never stop playing, and 2) Trying to play over our band whenever they did start up.

Fortunately, our Redcoat Band has two advantages over the Auburn band: 1) They are larger, and 2) They are louder. I salute the band for simply turning the volume knob to eleven when the Tiglesmen tried to play over them, and for not letting up when the game was well in hand. Even late in the game, our band was still cranking out the music loud and strong when the visitors in Orange and Blue had given up and were mostly sinking back into their sousaphones and piccolos.

Nicely done, Redcoats. (This picture has been lawya'd)

That's it for this week's edition... really, all we have to do this Saturday is avoid a letdown, because Kentucky really is fielding as poor a team as they've put out in a long time. As long as we do more than just throw our jerseys on the field, this game should be a walk in the park.

We still need the fans and students to show up, though, to cheer on our seniors for their last game in Sanford Stadium! And, as a bonus, if you stay 'til the end of the game (a high hurdle for some of you, I know), you'll get to hear Sanford Stadium announcer Brook Whitmire say over the PA system at the end of the game, "Your SEC Eastern Division Champion Georgia Bulldogs!"

And I promise that I'll try to find some righteous indignation next week to get ready for Tech. :-)