Share All sharing options for: You're on Notice, Dawg! Week 7... It's Goat Roastin' Time!

What can I say? Nicely done, Georgia Bulldogs... nicely done. You went into a tough Neyland Stadium environment with your freshmen and sophomore stars, played a tough, tight game, and came out on top. The offense sputtered at times, but not as badly as it has in the past 5 games, and the defense was... well, was a Junkyard Dawg defense.

And in case you didn't notice, Tennessee tried to do to Georgia exactly what Boise State did. They tried to follow the same "dink and dunk" recipe that Boise used to do in the Dawgs pretty much until they got down by 14 points. Now, Tyler Bray is no Kellen Moore, but the Georgia defense still defended well against this strategy, allowing only 6 points in the first half. When they went down by 14 points, the Vols were forced to move to a more aggressive strategy, and Bray-Bray looked substantially less sharp in the second half, as well, than he did in the first, which always helps.

Though it would be very amusing if Kellen Moore had "Moore" tatted across his back in this manner. (This picture has been lawya'd)

Either way, though, our defense manned up and played a tough, hard-fought game, and our offense came through when it needed to. (And zero missed field goals!) Good on ya, Dawgs. We needed that win.

And now... now we've arrived at that week we've all been greatly anticipating since exactly 30 seconds ago (or whenever you first saw the title of this post)... It's Goat Roast Week! That's right! This Saturday, Kyle, MaconDawg, and many of the regulars from Dawg Sports will be gathering at the Blind Pig Tavern in Athens to meet each other in person, have a good time while consuming adult foods and beverages, and watch the TV together as our beloved Dawgs take the field against Vanderbilt in Nashville!

Podunkdawg has been masterfully arranging this whole thing, so I'll leave it to her to tell us all when we should arrive, etc., but there will be people, food, drinks, and TV's... and really, isn't that all you need to have a good time?? Well, perhaps a Goat Roast T-shirt, too! (Buy one here.) But that's it!

So, with our 2nd annual Saturday gathering imminent, I'm letting the following people know that, for Goat Roast week, You're on Notice, Dawg! 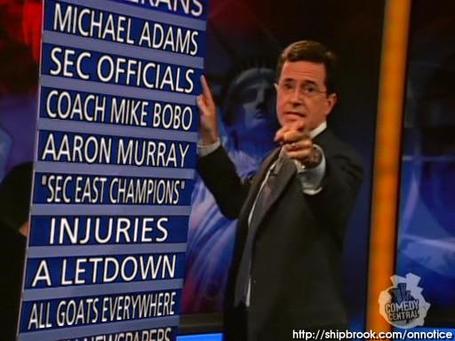 1) Michael Adams - Why Michael Adams? Because he's a jerk, has stolen money from and is a disaster for University, and everybody that has ever worked with him hates him. Plus, I have it from a very authoritative source inside the UGA administration that he has ordered a prohibition on using the terms "goat," "roast," and "new offensive coordinator" on campus for a period of at least 7 days. (Party pooper.)

2) SEC officials - Look, guys... I know your boss is a Tech man and hates Georgia. And I know his boss before him was a Tech man who hated Georgia as well, and it really gets their goat when Georgia wins. But dang, do you have to make your bias so blatant?? After flubbing a Georgia fumble recovery that was clear on everybody's monitor but the official's (Really? The video confirmed that Tennessee recovered the ball??), the crew responded to Georgia's second touchdown drive by penalizing them back into the stone age with holding penalties in an effort to kill their momentum. I mean, Drew Butler's punt on 4th down went 50 yards in the air and still didn't cross the first down line!

I commend our boys for overcoming Tennessee's "12th man" on the field, and personally I'm just amazed one of them didn't try to deliver an arm shiver to Aaron Murray on one of his scrambles downfield.

3) Coach Mike Bobo - You know, it was all going so well. We had a few offensive problems in the first half, but the team was really waking up in the second half and getting going, and starting to really move the ball against the Tennessee defense.

And then it happened.

Georgia scored to go up 20-6 on the Vols. We had gotten our 14 point lead. And then, faithfully on cue, Mike Bobo got all conservative up in here. It wouldn't even really surprise me to learn that he had actually called those 3 straight holding penalties himself just because he was concerned that we were "moving the ball too far, too fast." Or maybe a goat ran into the booth and stole his headset for 3 plays. I don't know, man.

Coach Bobo is obviously capable of calling a good game when the game is close. So the biggest question (asked for the 1000th time) is, why can't he stick with what's working when it's working? You're up by 14, your defense stops the other team... then you keep pounding the ball at them, putting your hand around their throat and squeezing.

This ain't kindergarten, Coach. We don't want to allow the other children time to get up and dust themselves off so they won't feel too badly about themselves. This is the ESS-EEE-CEE. We KTMFD, then kick him until he stops moving. If you don't like it, go play intramurals, brother. 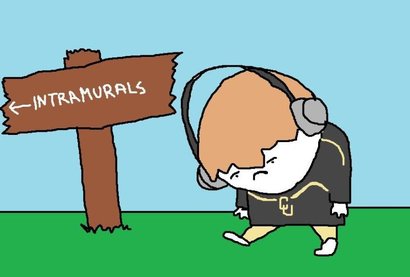 An illustration of the concept to which I'm referring (brother).

4) Aaron Murray - Ok, look. I know your offensive coordinator appears to be screwing with you sometimes just for the heck of it. I understand that this is frustrating. But you have to suck it up and perform like the elite quarterback you are, man. I know Tavarres King isn't as fast as Malcolm Mitchell, but you have to be aware of that when you line up for a play, and adjust your passes accordingly. All of your deep passes to T. King in the first half sailed over his head, and several of your passes to Mitchell (and one notable one to Marlon Brown) in the second half were underthrown, which could easily result in an interception, and maybe a pick 6. (I know you know what those are.)

We're going into a dangerous game this week against an opponent who utilizes an opportunistic defense to score points and set up field position via interceptions. You cannot lob up some of these gifts that you've done so frequently in the first 6 games. It's too easy to use the QB as a scapegoat when that happens, and you're better than that. Step up your game, my friend.

5) People declaring Georgia the favorite in the SEC East - Look, all we know at this point is that the sacrificial lamb SEC East representative in the conference championship game will be South Carolina, Florida, or Georgia. Georgia has already lost to South Carolina, and against Florida... ... ... ... well, why don't we just come back to that one later.

To borrow an adage from Fake-Tom-Hanks Jim Lovell, there's about a thousand things that have to happen in order for this to work out. We are on number seven. You're talking about number six hundred and ninety-two.

It's not even a given that we're going to beat Vanderbilt, let alone Auburn and Kentucky. And Florida... ... ... ... well, why don't we just come back to that one later. Let's not play the SEC's goat and start strutting around like we now own the division.

Vandy has beaten Georgia in the recent past, you know. (This picture has been lawya'd)

6) The injury bug - Malcolm Mitchell now has a dinged hamstring. Isaiah Crowell has been probably been nursing multiple dings since the South Carolina game. And Cornelius Washington dinged his cerebrum real good. And that's just the top-line set of circumstances that have collaborated to keep some of our best players off the field at the times we need them most.

I know Lady Luck is no longer being seduced into cooperation by the gravelly growl of Larry Munson... but geez, can't she smile on us just a little bit as it relates to injuries? Maybe Scott Howard could grow a goatee... chicks dig guys with goatees, right?

I'm not exactly sure which of these ladies is Lady Luck... but there's no doubt that she loves Munson! (This picture has been lawya'd)

7) The Letdown Patrol - Our team has just come off a major win over a division rival, and is now finally able to fix its eyes upon the season-ending goal of an SEC Eastern Division title, just like a mountain goat climbing a narrow mountain path who briefly gets a glimpse of the peak he's aspiring to reach.

Just like that goat can't take his eyes off the narrow path, though, lest a loose rock send him tumbling down into nothingness, you as a collective team cannot take your eyes off the opponent in front of you. Vanderbilt has a team that much improved over last year, and they are easily capable of upsetting this Georgia team when playing at home in their glorified high school stadium in Nashville.

Next week (the bye week) is the week to relax and dream big (and hate Florida). This week, you must concentrate and focus on obliterating that loose rock blocking your path to the summit. There is no other choice.

Be like this goat! Don't get distracted on your way to the summit! (This picture has been lawya'd)

8) Every goat within a 30-mile radius of Athens, Georgia (and that's a lot of goats) - Ladies and gentlemen, we will gather in Athens, and we will roast a goat*. And if John Lewis shows up to speak, we will not turn him away, as our cause is noble and just, and deserves to be supported by men and women of all beliefs and political orientations. 99% of all the goats are consumed by 1% of all the animal sacrifices in the world. OCCUPY THE BLIND PIG TAVERN!

This could get ugly. (This picture has been lawya'd)

My own attendance at the goat roast is about 75% confirmed, with only one potential major road block possibly preventing me from making it. (It had been 100% confirmed before last week, but it's a long, very personal story, and I am not going to share it... yet.) I am planning to be there on Saturday night, however, and will do everything in my power to be there... and so should you!