Earlier this evening, your intrepid Dawg Sports correspondent, along with his lovely and gracious better half, attended the women's soccer match between Georgia and Mississippi State. I'm happy to report that the Bulldogs won!

Ok, the good Dawgs won, is that better? Since I'm going to be making fun of his favorite soccer team at least once in the story below, I will also toss a nod in honor of RedCrake: 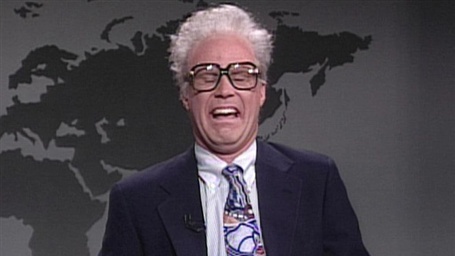 The game looked like it was going to be very ugly, but turned out to be a thrilling victory for our girls, who won 4-3 in the second overtime period, gaining the Georgia soccer program's 200th win! (Of all time, not in a season. That would be a record or something.)

Many people lament the fact that other nations have their own particular "national style of play," but the United States does not. Recently, however, it has been clear that the USA's particular style of play is to spot the opponent 1 or 2 goals early in the game, then come back and equalize or even take the lead near the end of the game. Well, on this night, ladies and gentlemen, your Georgia Bulldogs played an American-style game to its finest.

Mrs. Vineyarddawg and I were a little late to the proceedings, pulling into our parking spot right as the game kicked off. By the time we made it within earshot of the stadium, during the 5th minute, the score was already 1-0 in favor of the Bizzaro Bit... uh, Bulldogs, so I'm not exactly sure how they got their first goal. What I do know is that, by the 15th minute, the score was 2-0 in favor of the Magnolia State lovelies. 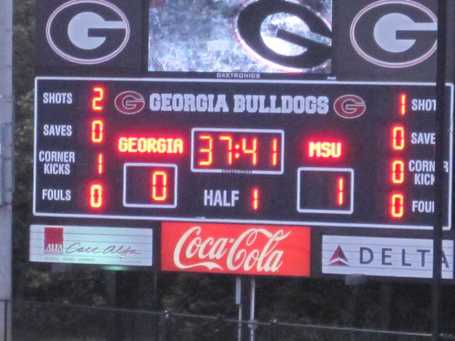 The scoreboard that greeted us as we reached our seats (the college clocks count down from 45:00).

As was the case virtually all night, Georgia absolutely dominated the run of play, but they just couldn't finish in the final third of the field. Also, during that first 15 minutes, they kept allowing 1 or 2 MSU attackers to slip behind them, and a midfielder would get the ball, slide a through-pass into the box, and boom, their attacker would have a 1:1 on our goalkeeper. And our GK also played much of the game in vintage Tottenham Hotspur form (before they got an American keeper, that is), so that didn't help things. (Note to non-English soccer fans: Spurs have historically had good keepers who make horrible mistakes at the worst times.)

The halftime score was 0-2, and the second half started equally inauspiciously, with the referee awarding penalty kick to MSU in the 65th minute on a play that was clearly an egregious dive. (And this about 2 minutes after what appeared to be a clear foul on one of our players in the box on the other side of the field.) So the wrong Dawgs went up 0-3. 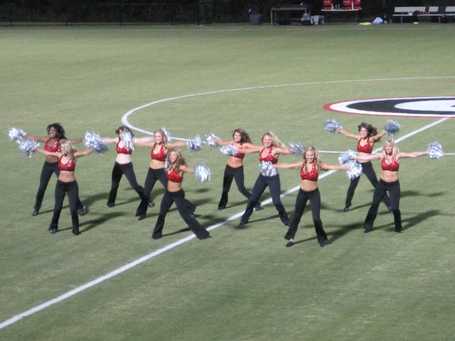 At halftime, however, the Dance Dawgs performed... so we had that going for us.

Finally, in the 71st minute, Alexa Newfield found a magnificent finisher from the top of the penalty box, landing the ball in the back of the net to open the ledger for the good Dawgs. Then, ten minutes later in the 81st minute, Jenna Owens headed home a beautiful cross to make the score 2-3. 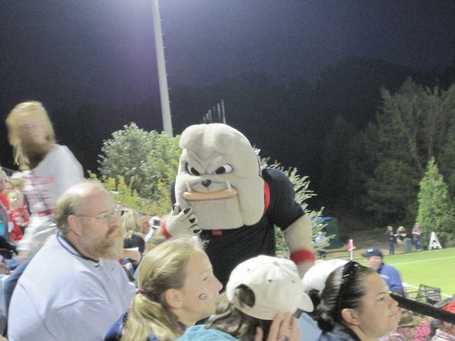 Hairy Dawg asks his neighbor if this means the Dawgs get one point, or if the game goes into overtime. (OT was the answer.)

The NCAA soccer rules state that tied games go into 10 minute golden-goal overtime periods, and the duo of Bulldogs played scoreless through the first overtime period. In the 103rd overall minute however (3rd minute of the second overtime), Alexa Newfield and Ashley Miller broke through on a 2-on-1 run through the backfield, with Newfield slotting a beautiful pass through to Miller, who tucked it neatly into the net for the Georgia winner.

Ultimately, this game was a win for the Dawgs, but a quick look at the stat sheet shows that they should have been ahead by far more. Georgia had 42 shots, but only 24 of them were on goal (and, to be fair, they only really made the keeper work for about 4 of her 20 saves). By contrast, MSU put up only 11 shots, 8 of which were on goal. 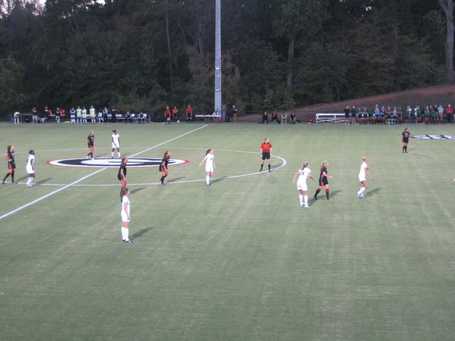 Georgia (in black) and MSU players (in white) wait for a ball just kicked from goal, wondering which UGA player will immediately kick it back to the goalie for the 925th shot of the game.

Georgia just couldn't get good power or targeting on most of its offerings, and there were generally far too many wishful, no-power shots from outside the box or incredibly poor crossing passes that ended up counting in the book as shots because they sailed blithely towards the frame (and directly at the keeper).

MSU was far more efficient with the ball when it fell to them, and credit to them for that, but the Georgia women did find a way to win, and that's worth 3 points in my book! Good luck to the Soccer Dawgs when they next take the field in Athens this Sunday to play Ole Miss(es)! 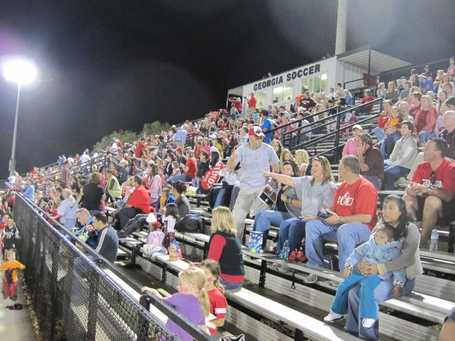 Hopefully we can get a crowd at least as big as this 1,815-person crowd on Sunday!