There is no question that the Georgia Bulldogs have struggled in recent years up at Neyland Stadium.  The last time the Dawgs won a game against the Tennessee Volunteers in their house was the last time Georgia won the Southeastern Conference title, in 2005.  Yeah, it's been a while.  Since then, playing the Volunteers in Knoxville has been beyond frustrating.  In 2007, Georgia came out flat and never recovered after getting down in a hurry, ultimately losing a 35-14 contest that wasn't as close as the score indicated.  That's a joke, son.  The most recent example of hitting rock bottom on Rocky Top was a true head-scratcher.  Personally, I though it was impossible to actually play worse (or flatter) than we did in 2007.  I was wrong.

Football is love.  And pain.  Eventually, your heart will be broken and it hurts.

The 2009 game was probably the most surprising loss of the entire season (other than losing to Oklahoma State.  Or Kentucky.  Sigh).  Tennessee's Giant Catfish Jonathon Crompton shredded our defense from the get-go, which was probably the turning point in the career of  defensive coordinator and possessor of extra-large thumbs, Willie Martinez.  Let's take a stroll down memory lane, shall we...to a happier time and place, and the last time we played the Vols in Neyland Stadium at night.  What a good night it was.  With apologies to our resident historian, vineyarddawg, I'm going to take a little crack at some seems like a million years ago recent history.

Georgia strolled into Knoxville sporting a 4-1 record and a #11 ranking, having dispatched Alabama at home the week before.  Tennessee was still smarting from an upset loss at Auburn, but was still ranked #7 and was favored against Georgia and Mark Richt who was making his second trip to Knoxville as Georgia's head coach.  Of course, everyone remembers his first soiree to Rocky Top.  Something about a hobnail boot? 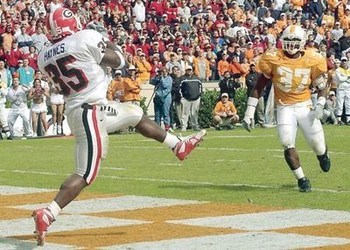 With that in mind, Georgia got a huge monkey off their back in 2001.  It had been a few years since the Dawgs left Neyland with a win.  Try 1980 and the debut of of Herschel Walker.  Yeah, it had been that long.

Personally, I felt good about this game.  I don't know why, but I did.  I mean, I had been to Knoxville for a night game and although my experience was a positive one in 1980 as a wide-eyed freshman, it's a tough place to play and the nighttime mystique had certainly been earned over the years.  Shoot, Tennessee was only 5 years removed from a National Championship and they would have Casey Clausen under center, who missed the previous year's tilt in Athens after declaring he could've played with a single arm or something to that effect, but was perfectly healthy (in body if not in mind) prior to kickoff.  You know what else I remember about this game?  I bet some money on the Dawgs to win on one of those "dot-com" betting sites.  I needed some Christmas green and figured I'd give it a shot.  Now, I don't advocate betting...and I can honestly tell you that I haven't bet since.  But after the game, Cha Ching!  Christmas bling!  I only admit this now because I'm pretty sure the statute of limitations has passed.  (Any lawyers out there?)  Georgia, I felt, was going to win a close game.  Again, I was wrong.  It was never close. 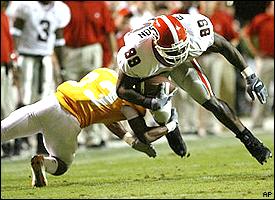 In addition to Greene's precision passing, Georgia rushed the ball for 186 yards on the night and dominated time of possession, 38:19 to 23:41.

Georgia began the scoring with a Billy Bennett 32 yard field goal midway through the first quarter.  Shortly after the second quarter began, Greene hooked up with Michael Johnson for an 11-yard touchown pass to make it 10-0.

Tennessee got on the board on their longest pass play from scrimmage in history when Mark Jones caught what appeared to be a sure-fire Decory Bryant interception and went 90 yards, literally reaching over Bryant's back and taking away what I thought would have been a death-knell turnover inside Tennessee territory.  Game on.

After another Billy Bennett field goal, Georgia was now up 13-7 and as time was running out in the first half, Tennessee put together their only real sustained drive of the game and threatened to take the lead and absolutely shift the momentum just before halftime.  At this point, I was worried...and so were you.  Tennessee just scored on a flukey long touchdown pass, we had to punt and The Vols were moving the ball methodically down the field and was in good shape near Georgia's goal line.  Just as the Vols were about to take the lead, a momentum shift for the ages happened:

the best part of this clip is at the :16 mark...and the fact that you don't see a single Vol in the frame for roughly 91 yards.  Good times.

Just like that, Georgia is up 20-7 at the half and Tennessee never recovered.

In the 3rd quarter, led by Georgia's relentless pass-rush, Georgia absolutely put the hammer down, scoring 21 points, all on rushing touchdowns, mostly set up by Tennessee turnovers .  Michael "Cooooooop" Cooper scored on a 6 yard run to cap off an 83 yard drive on Georgia's opening 2nd half possession.  Then, the wheels literally came off the Tennessee bus as the Vols began turning the ball over at a prodigious rate.

On Tennessee's next possession, the Vols fumbled again inside their own 5, setting up an eventual 8 yard Tyson Browning touchdown run, making the score 34-7 and virtually putting the game out of reach.

One minute later, all doubt was removed as Casey Clausen was picked off for the second time in the game.  On the very next play, Kregg Lumpkin took it to the house on a 22 yard run, putting the Dawgs up 41-7 with about 6:00 minutes left in the 3rd quarter.  Neyland Stadium began to empty quicker than a Prohibition Agent kicking over a barrel of mash. 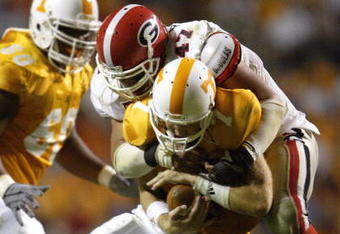 David Pollack making sure Clausen had both arms.  He did.

Georgia didn't score again, largely playing backups and rotating at will...which was probably the only time this has ever happened in Neyland.  Hmmm....get a lead and go into an offensive shell.  Sounds familiar.  I digress...

The Vols did add a garbage touchdown with :46 seconds left to play, but the only people who actually witnessed this in person were the Tennessee bench, the band, Smokey and a smattering of fans. 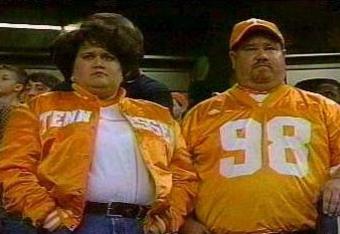 This shot is actually from the Vols 2001 SEC Championship game.  It still works.

Brian Van Gorder dialed up a relentless, attacking defense in this game.  As balanced as the offense was, ultimately gaining 414 total yards, the defensive pressure won the night.  David Pollack was in the UT backfield most of the evening and Tennessee, when they were gakking the ball up, couldn't do anything on the ground with only 61 rushing yards, most of which came on the drive that resulted in their cataclysmic fumble just before halftime.  It was one of those joyous, wonderful games where you were assured of a victory against a bitter rival shortly after halftime; one of those rare moments when you actually could eat something during the 4th quarter (at least, that's how my stomach works).  The drinks, they flowed...

As Georgia heads into Neyland on Saturday night, considering the inconsistencies on offense, it is incumbent upon our defense to do just like we did in '03:  make it a party.  Tennessee will try to run; they have to at least attempt a ground game.  But we know what's coming:  Tyler Bray is going to lineup in the shotgun and fling it.  He's having a helluva year against teams not named the Florida Gators.  I'm sure Derek Dooley's staff have reviewed a lot of Boise State tape and will probably try to exploit the same type of offensive strategy the Broncos successfully did a few weeks ago.  Short passes, slants, drag routes, etc.  Todd Grantham has been rotating linebackers all season long, and with Cornelius Washington suspended, his mix-and-match skills will be put to the test once again.  Will Ray Drew get some significant playing time this week?  I don't know.  It's an awful lot to ask of a true freshman who is still learning the position to go up to Knoxville and play fundamentally sound football in front of 100,000 + on a Saturday night.  Will we see T.J. Stripling?  There are many, many questions that will be answered on subsequent Dawgsports posts by writers who are far more eloquent and knowledgeable about such things than I.

I seriously doubt we'll see a repeat of the blowout of 2003.  But sometimes the fortunes of a team can literally turn on a dime, or on the goal line with an ill-timed fumble.  Stay tuned.