Share All sharing options for: You're (not) On Notice, Dawg! Week 10

Editor's Note: Sorry this week's article is about 18 hours late, Dawg fans. I was driving back from Jacksonville all Sunday, and if you think I was sober enough to write this Saturday night... (pause) (sound of hysterical laughter)

Yeah yeah, we have a lot of crap to gripe about vis-à-vis the Dawgs' performance on Saturday, and if anybody posts one word about any of it in the following thread, I'm going to personally come to your house/apartment/dorm room and slap you upside the head. 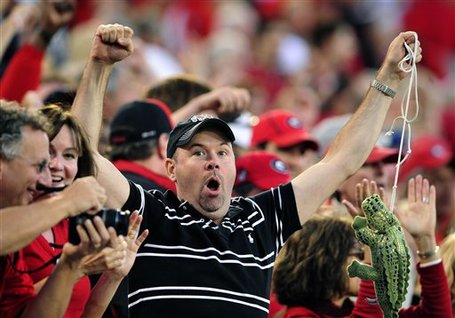 And I'm bringing this guy with me.

In honor of the team's collective achievement (and the fact that we are playing one of the few teams in the country even worse than Kentucky this week), I'm turning this week's segment on its head. Nobody's on notice. Instead, I'm singling out the following people for commendation by letting them know that, for the following week, You're Not On Notice, Dawg! 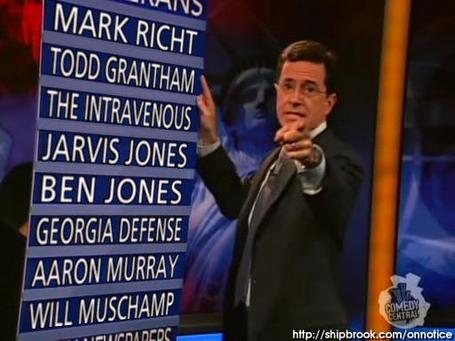 1) Mark Richt - To all those who were loudly shouting for us to fire Coach Richt after the South Carolina game, I would like to say the following:

2) Coach Todd Grantham - Two seasons ago, we were lamenting the fact that our defensive coordinator was apparently incapable of making halftime adjustments. This past Satuday, our new DC not only made halftime adjustments, it looked like he made first-quarter adjustments, because the Gators literally not almost nothing after their first two drives. It feels so good to once again have a fiery DC with whose defense we can entrust a 4-point lead for almost an entire quarter against Florida.

3) Richard the Intravenous - He's been incredibly impressive in exactly one quarter this entire year. But dang... he sure picked the right quarter! 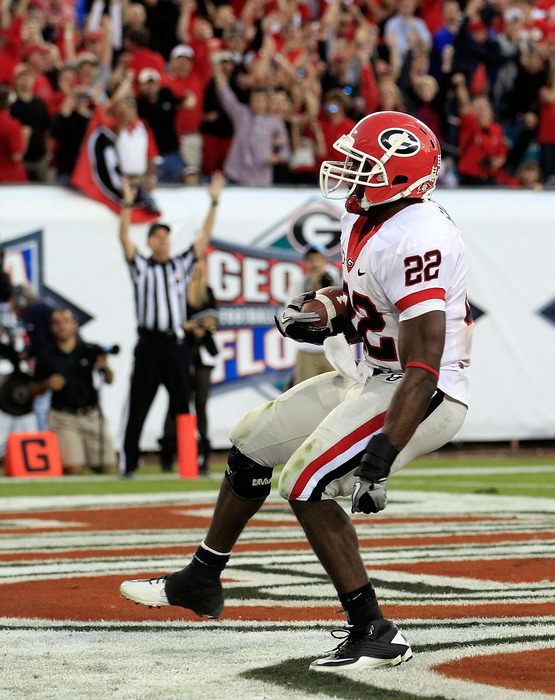 4) Jarvis Jones - Hey, Little Orange Riding Hood? I'd like you to meet my friend, B.B. Wolf. 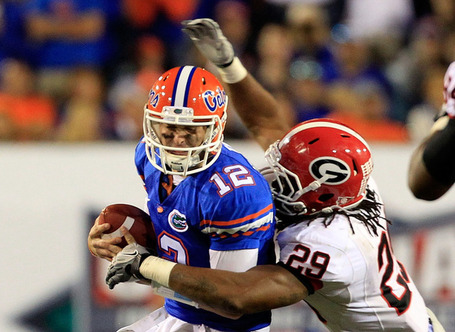 This is the only thing in my entire life for which I will ever thank Lane Kiffin. But thank you, Lane Kiffin!

5) Ben Jones - For giving us this picture, which illustrates my precise reaction when Aaron Murray downed the ball in the victory formation: 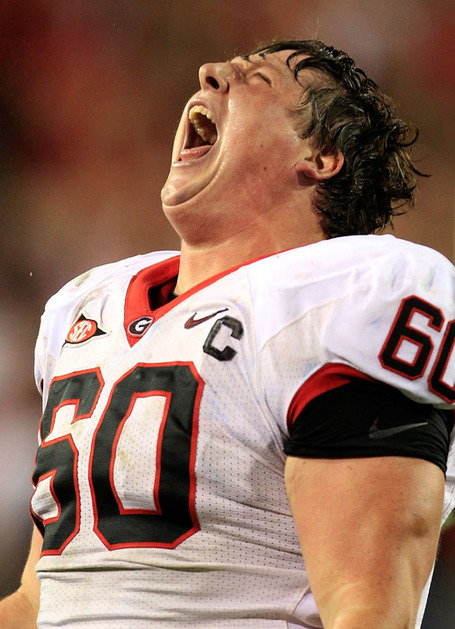 6) The entire Georgia Bulldog defense - Time after time, our special teams hung the defense out to dry with their crippling fear of tackling a ball-carrier. And time after time, our defense shut the Gators down like they were mid '90's-era Vanderbilt. In the first quarter, Florida got 226 yards total offense, but virtually all of that came in the first quarter. In the second half, Florida got just 32 yards of total offense and one first down. Also, for the game, Florida got minus-19 yards rushing. Minus-19 yards rushing, for the entire game.

7) Aaron Murray - I know I've banged on AM a lot this year, and not without reason. And he was certainly far from perfect Saturday. But he ran good drives when he needed to, he generally made good decisions, and his one interception was in no way his fault.

And here's the other thing... his team just beat Florida. So there's that. 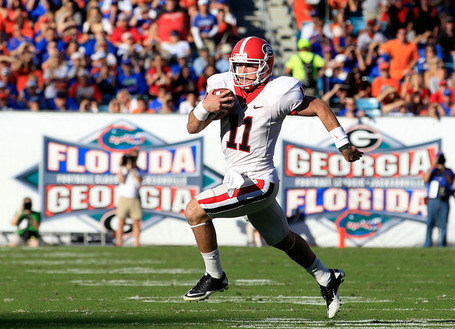 And he's not wearing a purse in this picture... so, there's that, too. 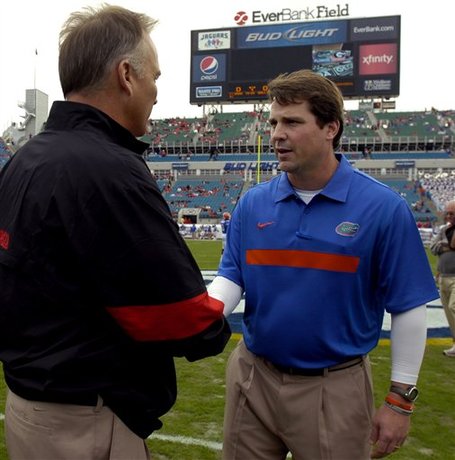 (Please note: In this week's article, the appropriately-named part of "Sir Not-Appearing-In-This-Article" is being jointly played by Mike Bobo, Blair Walsh, and Michael Adams.)

We're playing a group of Aggies that are not from Texas this week in a paycheck game, so it's a gimmie, of course. I know that the players have to move on and prepare, anyway... but if you guys don't mind, I'm just gonna sit here and soak in this one for a few more days, ok?

Y'all be safe this week, make sure you show up for this Saturday's game ('cause now we really do have something to cheer about), and...