Share All sharing options for: Hate Week 2011: Saluting Past Gator-Vanquishers

Let's get one thing straight: I hate Florida. It's not just a simple dislike, a harmonious discord, or even a deep, latent enmity. I hate Florida with the fire of a thousand suns being stoked by the fire of an additional thousand suns. In a world where my choices were to cheer for Florida or go blind, I'd start learning Braille. Most of the time, however, I am (relatively) civil while expressing this intense Gator hatred.

For one week a year, though, I allow my hate to come out of the closet and be displayed in its raw, naked form. This is that week.

I've spent the last two days discussing why we hate the Gators and ways in which we can show our Gator-hate. Today, I'm going to pause and take a nod towards history, because if there's one thing we know as Georgia fans, it's that this rivalry has existed long before 1990. (86 years, in fact.)

The Georgia/Florida Hall of Fame is a relatively new creation, having inducted its first class in 1995. Every year, two Georgia alumni and two Florida alumni who have made significant contributions to their teams in at least one Georgia/Florida game are inducted into the hall.

This year, one of Georgia's two inductees is a Georgia Bulldog you've probably never heard of, but who has a uniquely awesome Cocktail Party story: Bill Saye. (And no, if you Google him, he ain't that Bill Saye.)

First, however, let me also send a nod John Brantley's way. The All-SEC Georgia linebacker and 1987 defensive captain is a Damn Good Dawg, and I don't mean him any disrespect. He is a worthy addition to this year's class, having been Georgia's defensive leader in the 24-3 demolition of a Gators squad that had come into the game ranked #1 in 1985. For leading the humiliation of a #1-ranked Florida team, John Brantley, you will always have a special place in our hearts.

The other inductee into the Georgia/Florida Hall of Fame this year is Mr. Bill Saye. I know Mr. Saye personally, since my family has had season tickets located adjacent to his family's for about the last 20 years or so. As usually happens when you sit in the same place for 20 years, you develop habits and routines, and it's no different with us. Mr. Saye (whom is frequently now addressed as "Coach Saye" because of his high school coaching career after his playing days) always sits in the seat next to my father, three seats down from me, and even though Pitbull is never there, we always seem to have a real good time, anyway, watching the game and celebrating/complaining together.

As luck would have it, Bill was of college age during the nadir of Coach Wally Butts' career in Athens, so his career record at Georgia isn't particularly impressive. He attended the University from 1952-1955, and during his three Varsity seasons (freshmen were not eligible to play Varsity at that time), the Dawgs went 13-17-1, carding an SEC record of 6-12-1.

It certainly wasn't for a lack of looking the part, though. (This picture has been lawya'd, and a large shot here.)

One of the biggest highlights of Coach Saye's career came during his junior year at the 1954 Georgia/Florida game, and was noticed by Sports Illustrated writer Herman Hickman, who was sort of like the Lee Corso of his day. (Hickman coached the Yale football team back when, you know, they were relevant.) Georgia had just embarked upon a streak from 1952-1963 that would see the Dawgs lose 10 of 12 to the Sunshine State Saurians, but Bill Saye virtually singlehandedly did his part to ensure that he would emerge victorious over Florida at least once.

The following article was written by Herman Hickman in the November 15, 1954 edition of Sports Illustrated. (Yes, this is a snuck-in edition of "History Learnin'." And yes, my comments are still in italics.)

GAME OF THE WEEK 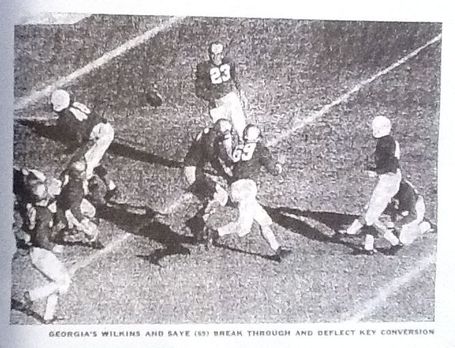 Before this football season began, experts ranked Georgia no better than tenth. That isn't tenth in the country, either. It's tenth in the Southeastern Conference. Florida, the experts figured, was far stronger.

Saturday, by the margin of a single point, Georgia gave Florida a beating. But when the Bulldogs had finished defeating the Gators, 14-13, the experts had taken the hardest fall.

Not that the setback didn't hurt Florida. The Gators' hopes of gaining a conference title and bowl bid turned dark. A Georgia center named Bill Saye (Hey!) turned out the lights.

Saye was the difference with two critical pass interceptions. He was the difference when he recovered a key Gator fumble. And he barreled in with Roy Wilkins to rush the kicker on the extra point try that could have turned Georgia victory into a frustrating tie. It wasn't a bad day for a fellow who was a fourth string guard last year and is playing center this season for the first time since high school.

Fumbling Florida lost the ball three times. One fumble started a Bulldog drive that ended when Jimmy Harper plunged over from the one. Charlie Madison's conversion was good. Florida matched the score early in the second quarter but late in the period Georgia untied it when Bob Clemens capped a 69-yard drive with a scoring buck. Madison's second conversion was as good as his first.Don Chandler intercepted a Harper pass in the third quarter and ran 67 yards to the seven. Three plays later Bob Davis tallied and the game's biggest moment was at hand. Left end Wilkins, with Saye broke through and blocked Allen's try for the tie. Georgia had its one-point lead and it stood up. Saye made sure. With less than two minutes to go he intercepted a Florida pass and then his mates simply killed the clock.

For the Gators it was a bitter loss since victory would have given them undisputed conference leadership. For Georgia it was different. When the game was over, Coach Wally Butts, the forgotten man of football, was forgotten no longer. Butts was hoisted high on stalwart shoulders and carried triumphantly from the field.

I've heard this story from Coach Saye himself before, and it's really fun to hear him tell it. Of course, he always points out that this was during the time when players went both ways, so he played Center on offense, Linebacker on defense, and he also punted the ball. (So apparently, even back then Georgia needed a quality long snapper in addition to their center!)

For recovering one fumble, blocking an extra-point try (which provided the margin of victory) and intercepting two passes, one of which sealed the game, we all salute you, Bill Saye. You're a Damn Good Dawg.

This story has an interesting postscript, as well. After graduating from Georgia, Bill Saye went into the business world, but also coached football at Hart County High School from 1961-1968. During this time, he hired a brand new assistant coach named Bobby Pate. Pate, who was the first player ever signed by Bobby Bowden at South Georgia Junior College, later went on to start the West Georgia College football program around the same time Erk Russell went to Georgia Southern, winning a Division III national title with the Braves (now Wolves) in 1982 and reaching the finals the year before that in 1981.