Share All sharing options for: You're on Notice, Dawg! Hate Week 2011

I hope everyone had a good off-week and enjoyed watching teams not named the Georgia Bulldogs torture their fans by losing games against teams they should have beaten easily. I personally didn't get to watch as much football as I would have liked, since Mrs. Vineyarddawg and I are doing some work on our newly-purchased home, but it was still a good weekend.

Now... we turn to the coming main event.

I know we have another rivalry that's called Clean Old-Fashioned Hate, and that's all well and good. This week, however, isn't clean, and it isn't old-fashioned (though it is a tradition going back to 1904). It's just hate. Dirty, stinkin', drankin', sweatin'... hate. I hate Florida. You hate Florida. We all hate Florida.

Therefore, I say to following people that, for the 2011 version of Hate Week, You're on Notice, Dawg! 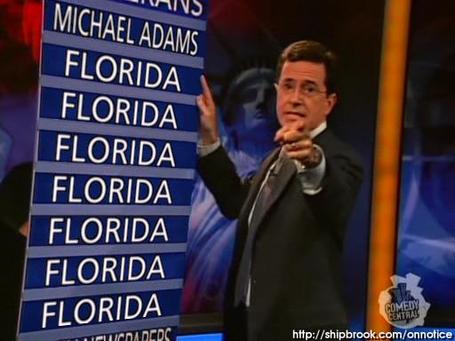 What, you were expecting something other than irrational, intense hatred?

1) Michael Adams - Why Michael Adams? Because he's a jerk, has stolen money from and is a disaster for University, and everybody that has ever worked with him hates him. Plus, I have it from a very authoritative source inside the UGA administration that he lobbied the SEC office not only to suspend Kwame Geathers and Shawn Williams for the entire Florida game, but Coach Todd Grantham, as well.

2-8) The Florida Gators - To the Florida fans with class out there, please let me clarify: I have no quarrel personally with you. As Kyle has said many times in many situations, ours is an institutional rivalry, not a personal one. So don't take this personally, but I hope that, this time next week, you're so distraught and frustrated that you can't think straight.

Florida comes into this game as losers of their last three. And as long as South Carolina manages to lose the games they're now supposed to lose without Stephen Garcia and Marcus Lattimore, Georgia doesn't even technically need to win this game to win the Eastern Division. (We only need to beat Auburn and Kentucky.)

You and I both know that none of this matters, however. They are Florida. We are Georgia. Their winning streak over us is a soul-crushing, morale-defeating albatross around our necks that must be lifted. We must break them or be broken by them (again).

My hatred for the University of Florida prevents me from thinking rationally about this game, so I always go with my standard prediction: a repeat of the 1942 result, which was a 75-0 Georgia win. Do I really expect that result? I don't know. I just want to beat the hell out of Florida.

I'll have some more hate-week venom to spew southward as the week progresses. For now, though, I'll just close by saying: