You're on Notice, Dawg! Week 8

Share All sharing options for: You're on Notice, Dawg! Week 8

First, the good news... we had a fantastic time at the Goat Roast last night! Thanks to everybody that showed up and made it such a great time! I always enjoy meeting fellow Dawg fans, and the Dawg Sports crowd even more so. Y'all are a great group to be around. :-)

Unfortunately, Kyle and podunkdawg might have to consider whether to actually hold another one in person or not next year, because weird stuff happens in the universe when the Dawg Sports crew gather. Last year, we lost to Colo-freakin'-rado. This year, we almost lost to Vanderbilt on a last-second blocked punt, and our defensive coordinator appeared to try to pick a fight with Vandy's head coach and had to be separated by the players. Really, the best thing you can say about the game last night is that we got the W.

But there is another point to be made here, as well. I have made many protestations this year about Georgia Bulldogs not having won a close game... one that was literally decided in the last minute and on the last play of the game... since 2009. We didn't do that at all last season, and 2010's squad would likely have allowed Vandy a huge last-second touchdown to snatch defeat from the jaws of victory last night. Ladies and gentlemen, it was ugly, but we finally won a close game. The defense stood up tall over the last 10 seconds and kept the 'Dores out of the endzone, and for that, I salute them.

Now, we look ahead! This week, week 8 of the college football season, is absolutely critical to all Georgia fans. Our team will not be taking the field of play this Saturday, but you and I both still have work to do.

In two weeks, we play the Florida Gators, and if you want your hate to be built up to the level mine will be, you gotta start working on it this week. It doesn't require a lot of active work right now, but over the next 7 days, just think about all the pain, suffering, and gnashing of teeth you have experienced at the hands of the Sunshine State Saurians.

Remember the game that we would have won if D.J. Shockley hadn't been inujured for exactly 1 game in 2005. Remember last year's OT debacle. Hell, remember the entire collective decade of the 1990's.

By this time next Sunday, I expect you to have built up a nice, simmering seethe towards the Gators. If you take the time to do that, you'll be in a very nice place to begin the hate week festivities. Rest assured, I'll have my contributions lined up, as well.

For now, though, during the bye week, I'm letting the following people know that You're on Notice, Dawg! 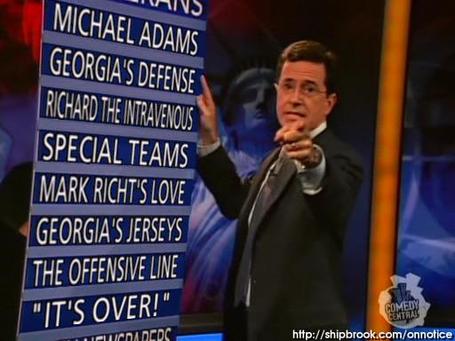 1) Michael Adams - I don't even have to put up the facade this week. The man announced that he wants to reduce the number of scholarships available to Division I-A football teams. All I can say in answer to that idea is, "This ain't intramurals, brother."

President Adams is seen here holding the cilice that he forces Mark Richt to wear every week while he peppers the coach with ideas about how we could make college football weaker and less entertaining. (This picture has been lawya'd)

2) The entire Georgia defense - I'm not sure if I'm really addressing this to the Georgia defense or not, because I'm not exactly sure whose team's defense was lined up in the white jerseys and silver britches with the red "G" helmets on Saturday. They wore Georgia' uniforms, but they certainly didn't play like them. Our defense gave up 21 legitimate points without any help from the offense yesterday. That's only 1 less point than they gave up to Ole Miss, Mississippi State, and Tennessee combined. (I'm not counting pick 6's or special teams TD's.)

And what's with the cheap personal foul penalties? I understand that nobody likes it when little bitches who can't play up to your level decide to cut block you instead. It's dangerous, can cause a career-ending injury, and is a cheap shot. But it's legal, and you need to learn to deal with it, because you're going to be seeing a helluva lot more of it during our final regular-season game, if not before. And cut blocks certainly can't stop you from wrapping your man up on every tackle, which our squad rarely did. We saw far, far too much last night of the "bump 'em and hope they fall down" defense that was a hallmark of the Willie Martinez administration.

This style of tackling will not end well. (This picture has been lawya'd)

You know, a lot of people bang on Richard, and I don't think it's fair. I mean, he's a great runner... it's just that large bag and stand he's carrying with him keeps slowing him down. Why do you think he always goes down at first contact? He doesn't want to rip out his IV line! You know how much of a pain it is to get those things put back in?

I'm just glad he's still dressing in a uniform instead of trying to run in one of those gowns. I don't think anybody wants to see that. (This picture has been lawya'd)

4) Special teams - There are many reasons to remain pessimistic regarding our chances of an SEC East title this season. Formost among them, however, is our special teams play. It started off poorly and has just gotten worse as the season progressed. Apparently, we can't reliably cover a punt, can't consistently kick a field goal, can't field an onside kick, and can't stop the last punt of the game from being blocked.

Our offensive woes have already cost us one game (South Carolina). At this rate, our special teams play will cost us at least one more.

5) Mark Richt's brand of love - Hey, man, I love you. Would you allow me to show that love by sitting your butt down on that bench, please? No, honey... hush. Just sit down and take your shirt off. Yes, I'm getting out a cat o' nine tails, but you needn't worry about that. I love you.

To be honest, I don't really care for all the subterfuge. Just let the world know that it's an internal discipline issue, and you're dealing with it. What's wrong with that?

I was going to say, "Picture Mark Richt wearing this outfit"... but I don't think any of us need that mental image. (This picture has been lawya'd)

6) Georgia's jerseys - Overall, it seemed to me like, in spite of our coaches' exhortation to the contrary, our team came cruising into this game assuming that they could just throw their jerseys onto the field and win the game. And, to be honest, they kind of did. Those jerseys really need to step up their game, though, if they're ever going to try that again. New Mexico State's jerseys are no pushovers. Ok, well, they kind of are. But Kentucky's aren't.

7) Offensive line - There's no way to sugarcoat this: Our blocking for this entire game was absolutely awful. Our run blocking was abysmal, and our pass blocking was even worse. We picked up blitzes about as well as Phil Fulmer picks up a salad. We might be able to beat B.Y.E. Technical College this week with that kind of showing, but it will not be successful the following week in Jacksonville.

Wait... so what are we sugarcoating? (This picture has been lawya'd)

8) Vineyarddawg, Just Some Dawg, and anyone else at the Goat Roast who said the game was over when Bacarri Rambo intercepted the ball late in the 4th quarter - Kyle called both of us out on it, and we both defiantly told him to "stuff it" (well, in a polite way)... and then Drew Butler got his first punt of the year blocked. When will we learn? It ain't over 'til Auburn's momma sings. (See what I did there?)

Well, how about that? Who'd have figured that Auburn's momma was a Steelers fan? (This picture has been lawya'd)

I hope our boys enjoy their week off, because they've definitely earned it. They've played hard for 7 weeks, generally improved from week to week, and it certainly can't hurt to have a week to work on our fundamentals. (Like, you know, actually tackling a guy instead of tapping them on the shoulder and asking them to fall down.)

There are only 7 days left until Hate Week starts. Get ready, Dawg fans. Jacksonville is coming.