Will Ralph Friedgen be the Georgia Bulldogs' Next Offensive Line Coach?: Why Hiring This Good Coach Would be a Bad Idea

Share All sharing options for: Will Ralph Friedgen be the Georgia Bulldogs' Next Offensive Line Coach?: Why Hiring This Good Coach Would be a Bad Idea

Bulldog Nation’s Thursday evening, already marred by the Lady Dogs’ loss at South Carolina, took a turn for the bizarre when text messages and Twitter updates disseminated the rumory rumor that Ralph Friedgen was the frontrunner among three candidates to succeed Stacy Searels as the Georgia Bulldogs’ offensive line coach. Hey, it would explain why Ralph Friedgen follows Mark Richt’s Twitter feed: 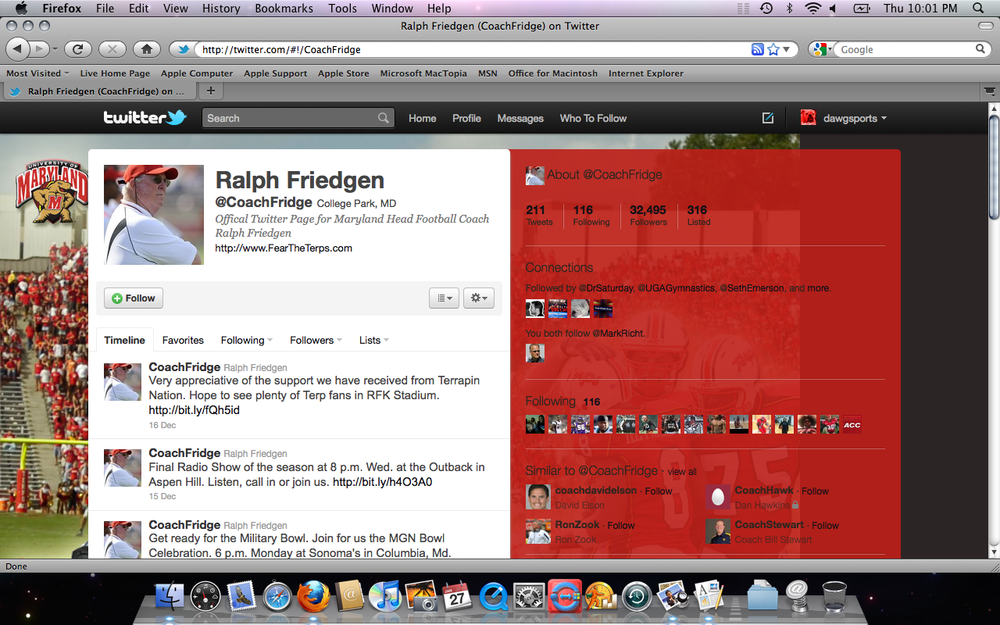 There is no question about Coach Friedgen’s qualifications and no doubt that he is a quality offensive coach. He does, however, seem a bit overqualified for the post. It was one thing for Robbie Caldwell to follow up a single-season stint as the head coach at Vanderbilt with a job as Clemson’s offensive line coach; Coach Caldwell essentially was an interim coach promoted from within when Bobby Johnson stepped down suddenly, and nothing he did after wowing the crowd at SEC Media Days suggested that he had not been elevated beyond his level of competence. It was perfectly appropriate that Robbie Caldwell succeed Brad Scott as offensive line coach at Fort Hill. (By the way, what would be the argument against hiring Brad Scott to be Georgia’s offensive line coach? He is a former head coach at an SEC East school, he has been assigned an "administrative role" at a campus an hour’s drive from Athens, and he has a longstanding relationship with Mark Richt dating back to their days in Tallahassee.)

Coach Friedgen, however, is in a very different situation from Coach Caldwell. Coach Friedgen was a head coach for as long as Coach Richt has been one; Coach Friedgen is a Broyles Award winner and a two-time ACC Coach of the Year. His last year as an assistant coach was 2000; his last year as a position coach at the college level was 1976, the year before he was promoted from line coach to coordinator at The Citadel.

After spending a decade as a Division I-A head coach and 22 seasons as an offensive coordinator at five different colleges and in the NFL, Coach Friedgen might think twice before becoming a college position coach for the first time since the year Jimmy Carter was elected president and Ray Goff was guiding the Bulldogs to an SEC championship. He might also think a third time before accepting such a position under an offensive coordinator who was born after the first year of Coach Friedgen’s four-year stint as the line coach of The Citadel.

I have questioned whether Charlie Weis’s ego will allow the former Notre Dame head coach and Super Bowl-winning offensive coordinator to coexist peacefully with a fiery young rookie skipper like Will Muschamp; I have similar questions about Ralph Friedgen’s ability to serve with Mike Bobo as his immediate supervisor. Coach Bobo’s last year in a Georgia uniform, after all, was the first year of Coach Friedgen’s second stint as the offensive coordinator at Georgia Tech. With all due respect to Coach Bobo, who is a damn good ‘Dawg, Coach Friedgen is more qualified for his job than he is, and both men have to know that.

It would be one thing if Coach Friedgen were called upon to serve as offensive coordinator while Coach Bobo served under him as quarterbacks coach; I believe that arrangement might work exceptionally well, as both men have shown considerable aptitude for those jobs. To ask Ralph Friedgen to serve as a position coach while Mike Bobo calls the plays, though, would be to invite disaster. This spring, Coach Bobo will celebrate his 37th birthday five days after Coach Friedgen celebrates his 64th; if the two men at that time are serving on the same staff, it is hard to believe it will not rankle the older man to be below the younger man on the organizational chart. It is beneath Ralph Friedgen to serve beneath Mike Bobo.

That is why I place little stock in this rumor and have even less faith that this hire for this job at this time would end well. Ralph Friedgen was a fine head coach and an outstanding offensive coordinator; he is overqualified for the post of Georgia’s offensive line coach, which would have him serving under a coordinator who clearly lacks the Fridge’s play-calling acumen. What Sam Rayburn, as speaker of the House, said of Dwight Eisenhower as president of the United States applies here: "Good man, wrong job."