Except in the most egregious instances, I am not one to bark too loudly about officiating; heck, I didn’t even harp on the game-changing unsportsmanlike conduct call against A.J. Green in the 2009 LSU game. Sometimes, however, such grousing is warranted. This is one of those times.

Rule 4 of the NCAA basketball rulebook (which is available in .pdf format here) provides:

Art. 1. A rebound is an attempt by any player to secure possession of the ball after a try for goal. In a rebounding situation, there is no player or team control.

Art. 2. To attain or maintain legal rebounding position, a player shall not:

a. Displace, charge, or push an opponent.
b. Extend either or both shoulders, hips, knees or extend either or both arms or elbows fully or partially in a position other than vertical so that the freedom of movement of an opponent is hindered when contact with any of these body parts occurs.
c. Bend his/her body in an abnormal position to hold or displace an opponent.
d. Violate the principle of verticality.

Art. 3. Every player shall be entitled to a spot on the playing court, provided that such player gets there first without illegally contacting an opponent.

Here is what happened Tuesday night, with screen shots from the video posted by CollegeBasketballTalk.com: 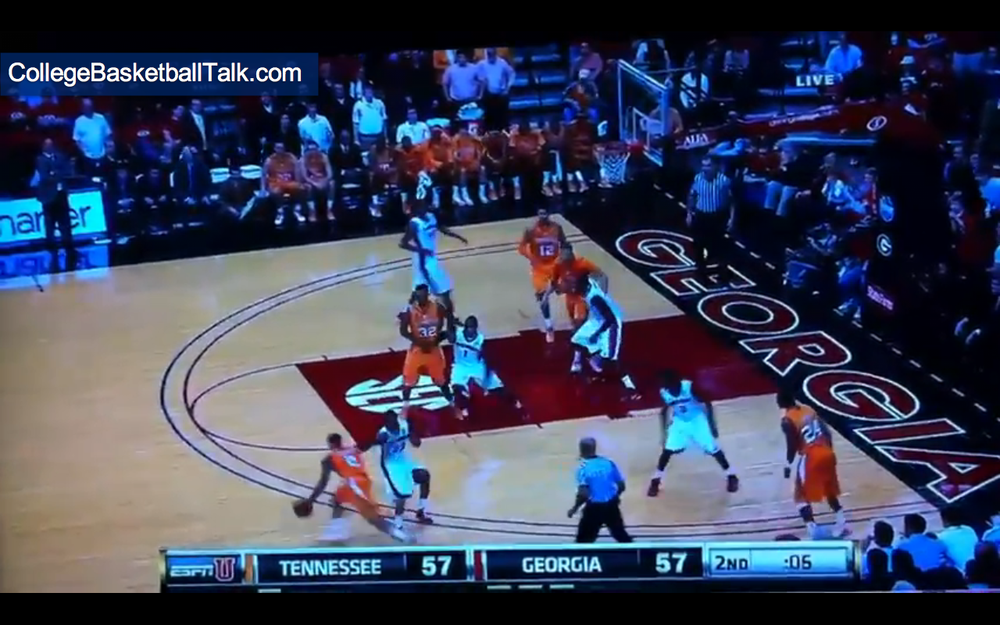 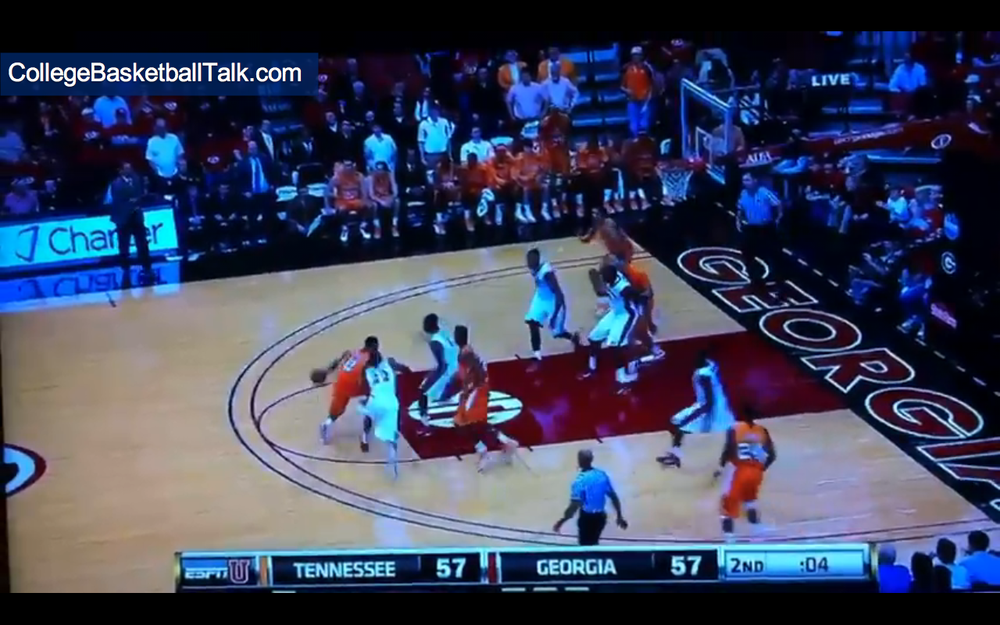 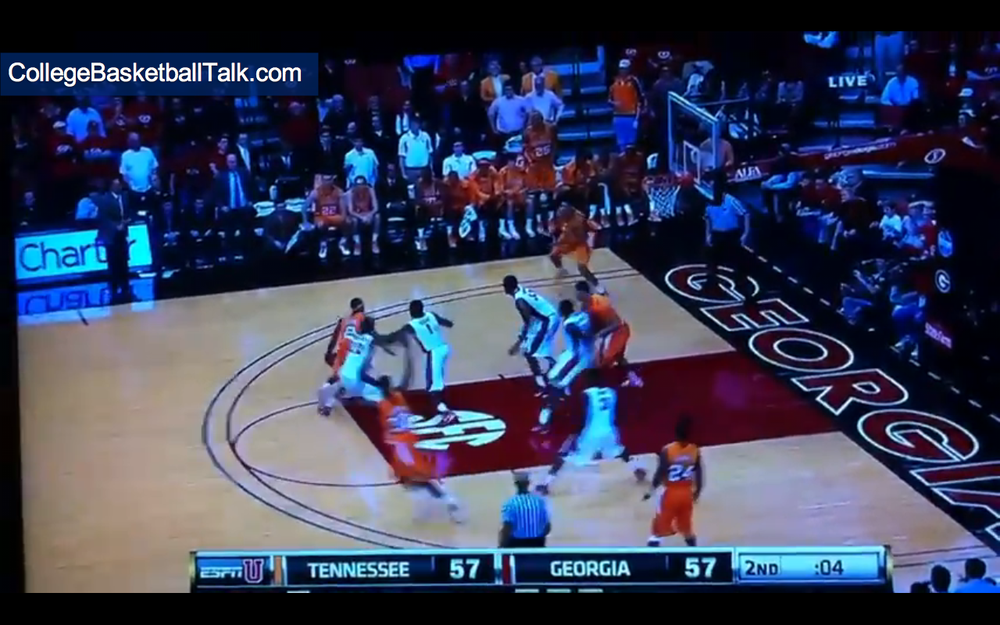 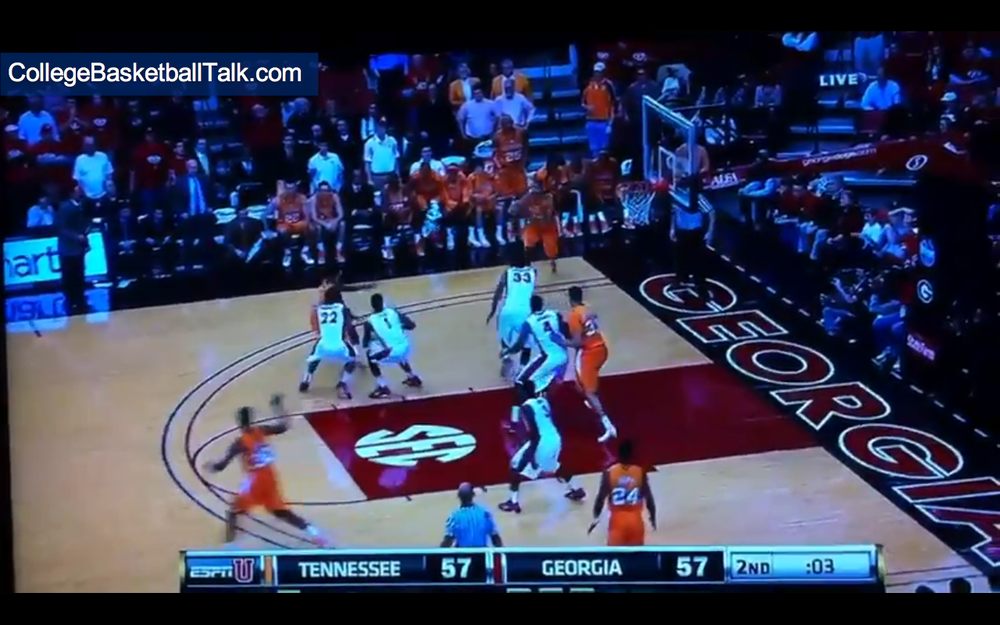 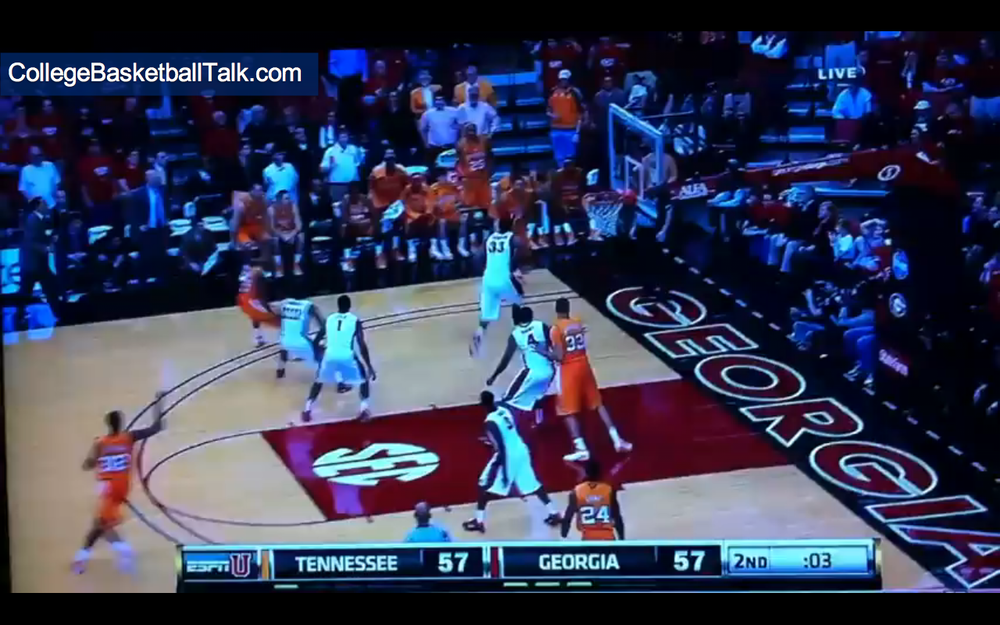 In the moments leading up to the would-be game-winning shot by the Tennessee Volunteers’ Tobias Harris (12), the Georgia Bulldogs’ Chris Barnes (4) and the Big Orange’s Brian Williams (33) are stationed beneath the basket. 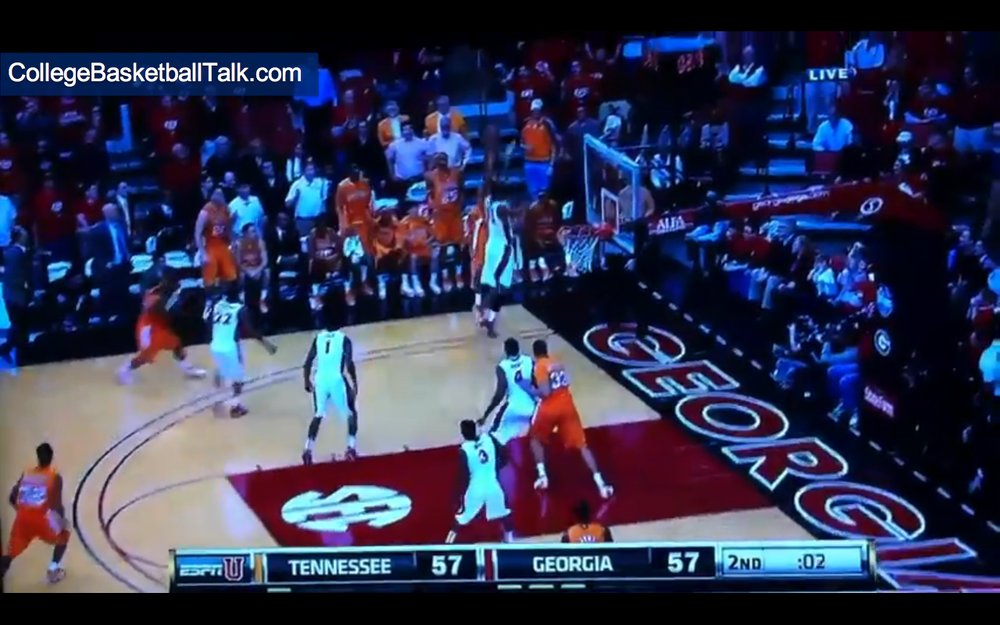 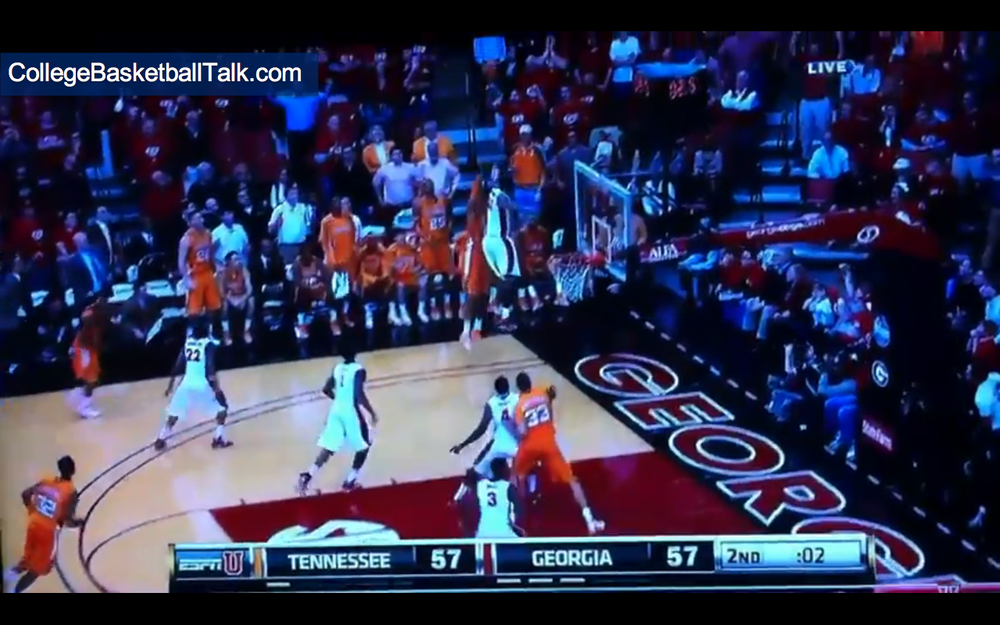 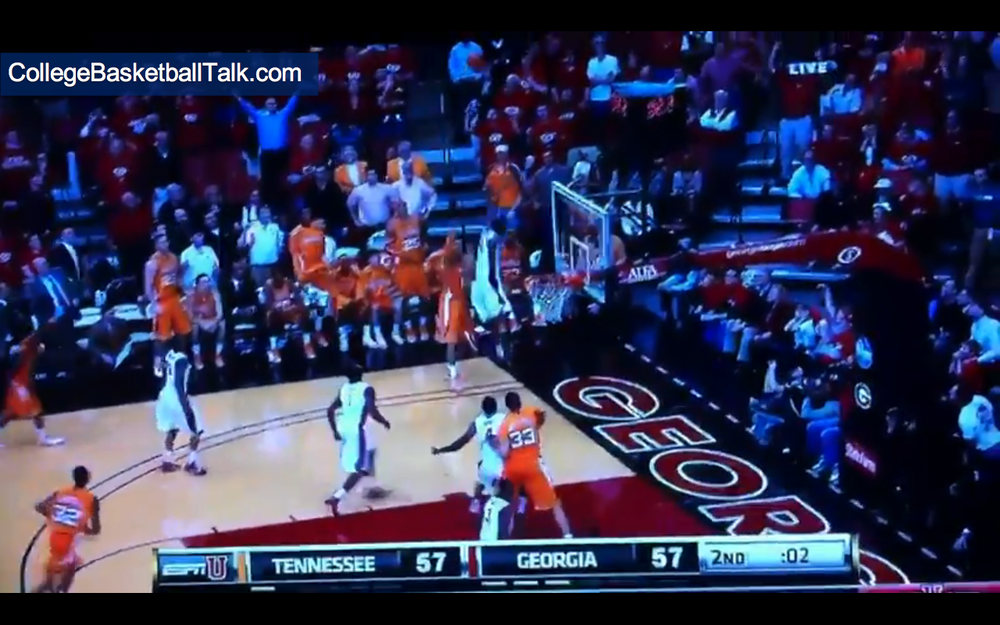 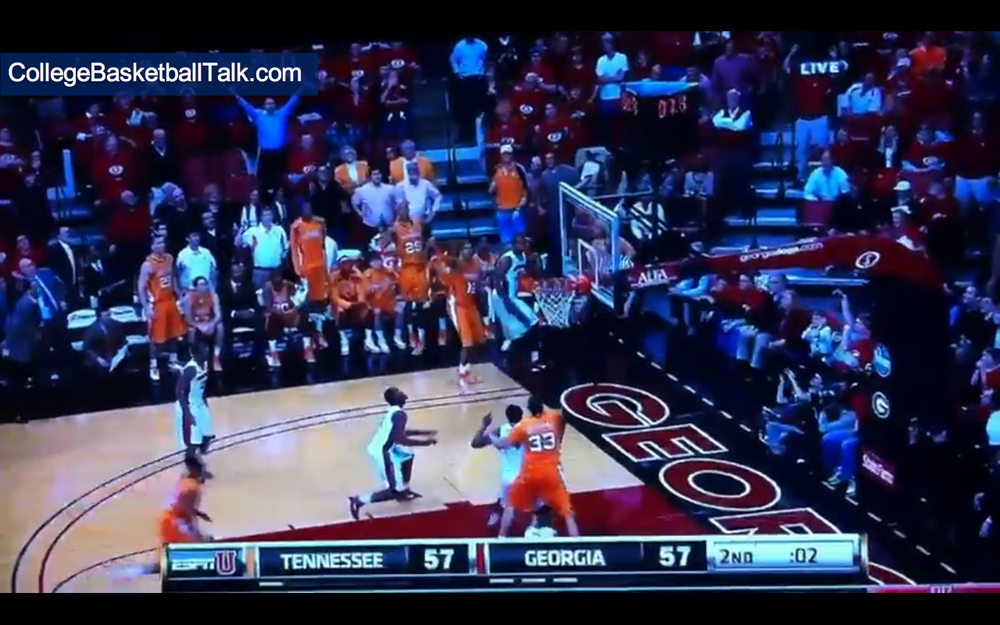 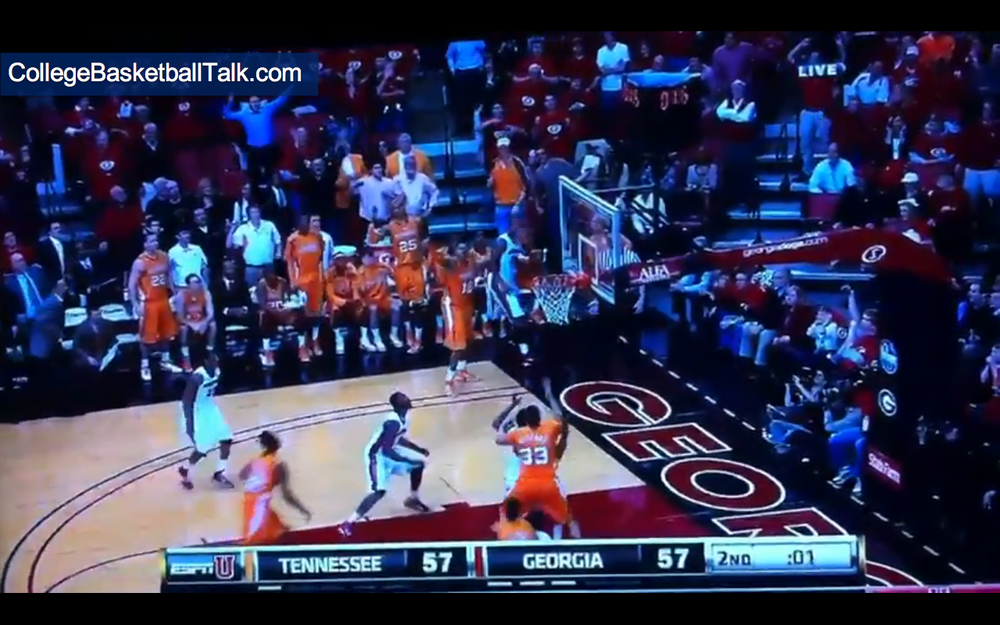 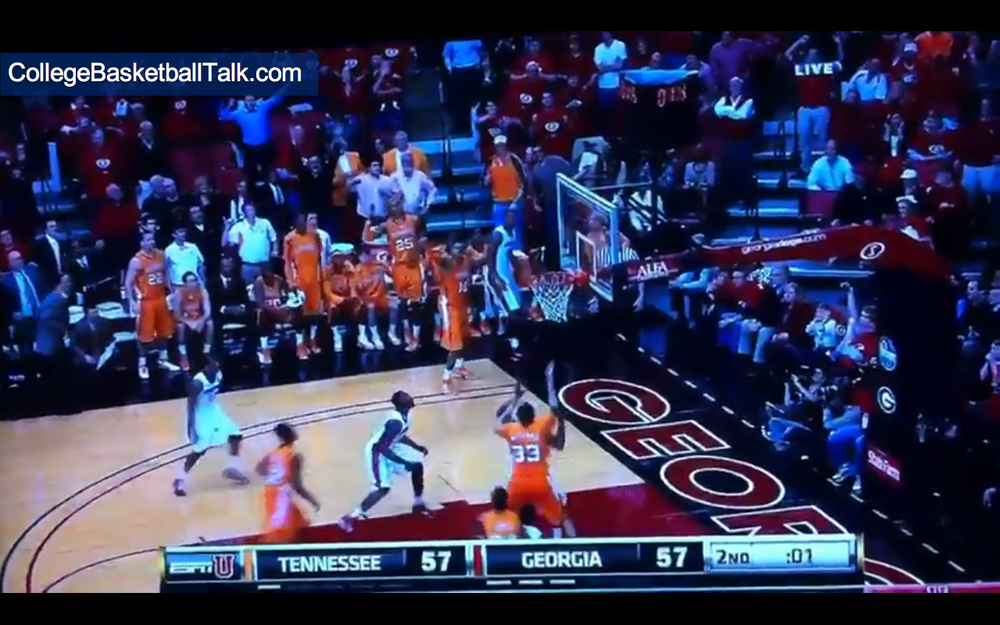 Here, Harris shoots. Note that Barnes has the spot on the playing court to which he is entitled, to which he got first without illegally contacting Williams. Williams has a hand on Barnes’s back throughout the first three shots, before both players’ hands start to go up for the rebound in the fourth shot. In the fifth shot, Williams’s right arm is vertical, and the motion of his left arm mirrors the motion of Barnes’s left arm. This pattern of movement continues fluidly in the sixth shot, as each player is in his spot on the court, with Barnes’s left arm in front of Williams’s left arm and Williams’s right arm extending over Barnes’s right arm. 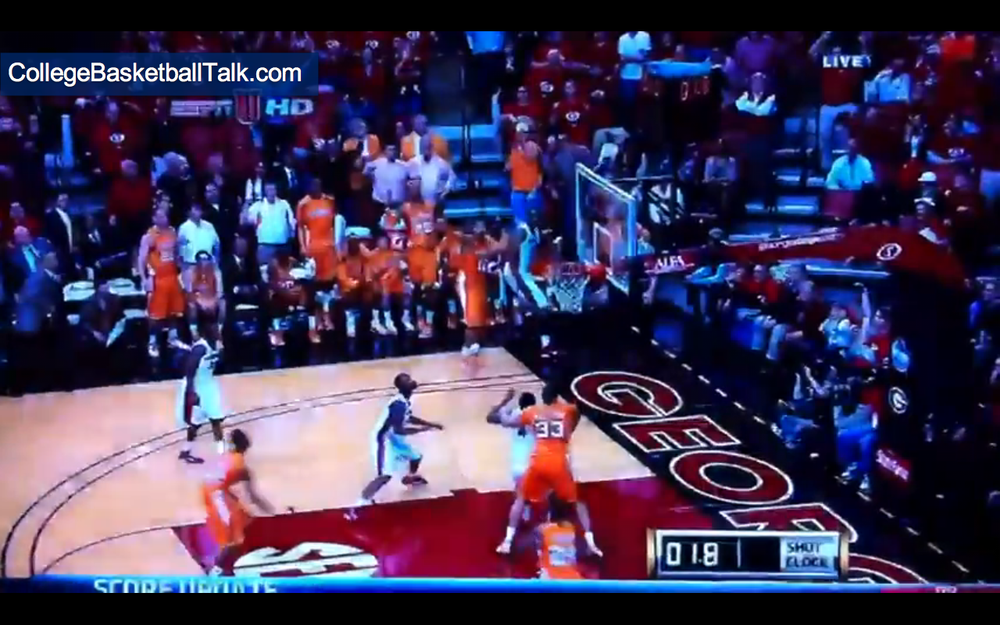 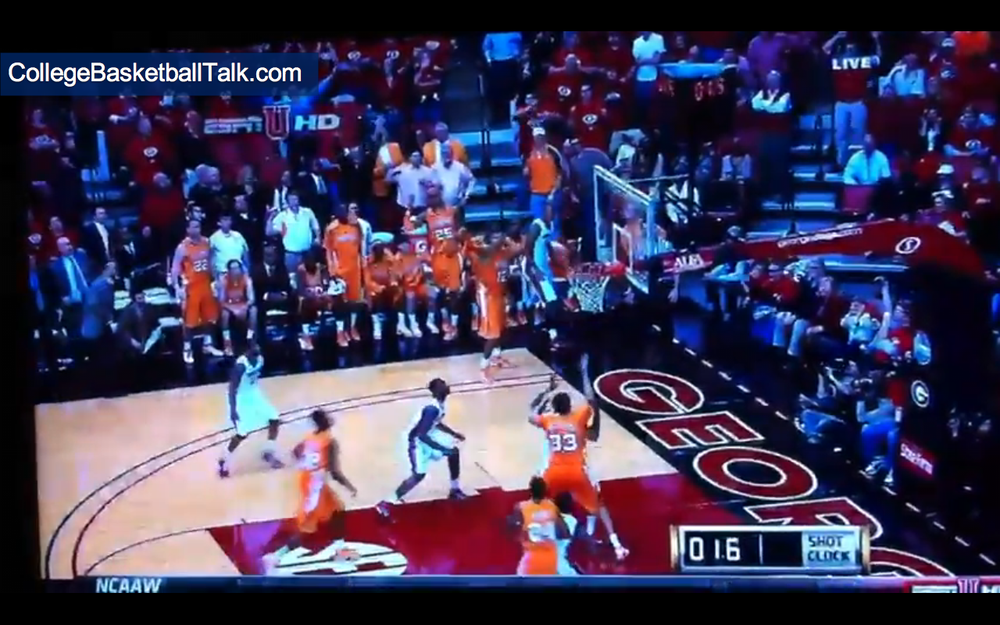 The shot clock shows 1.6 seconds remaining. Once again, Barnes’s position is unchanged. Both arms are clearly visible for both players. Williams’s left arm remains over Barnes’s left arm, and Williams’s right arm is above and inside of Barnes’s right arm. Note the position of Barnes’s right hand behind Williams’s right elbow; Williams is reaching over and through Barnes, and the Tennessee player’s right shoulder essentially is directly above the Georgia player’s right shoulder. 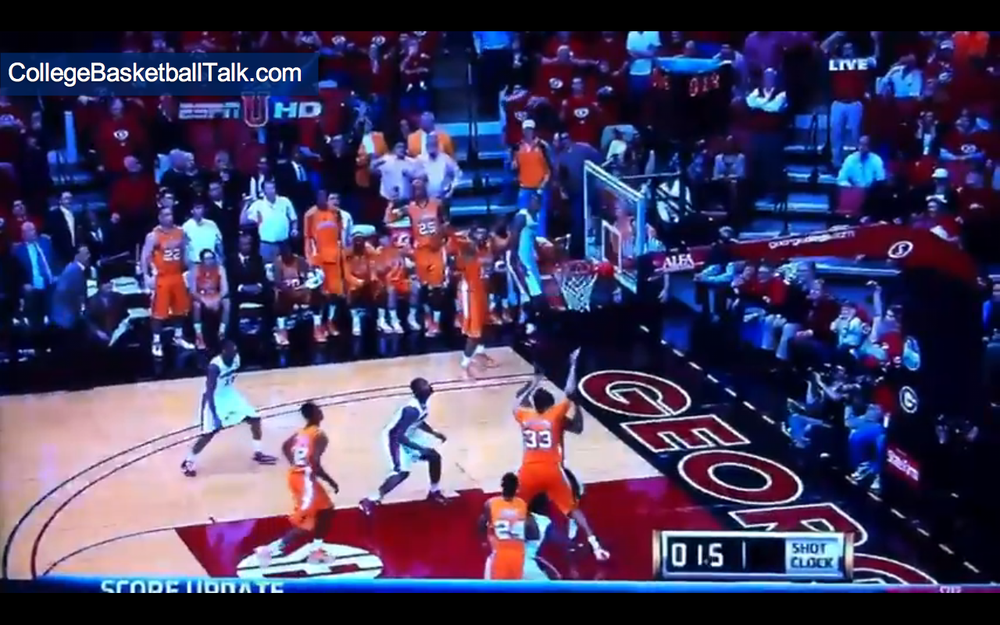 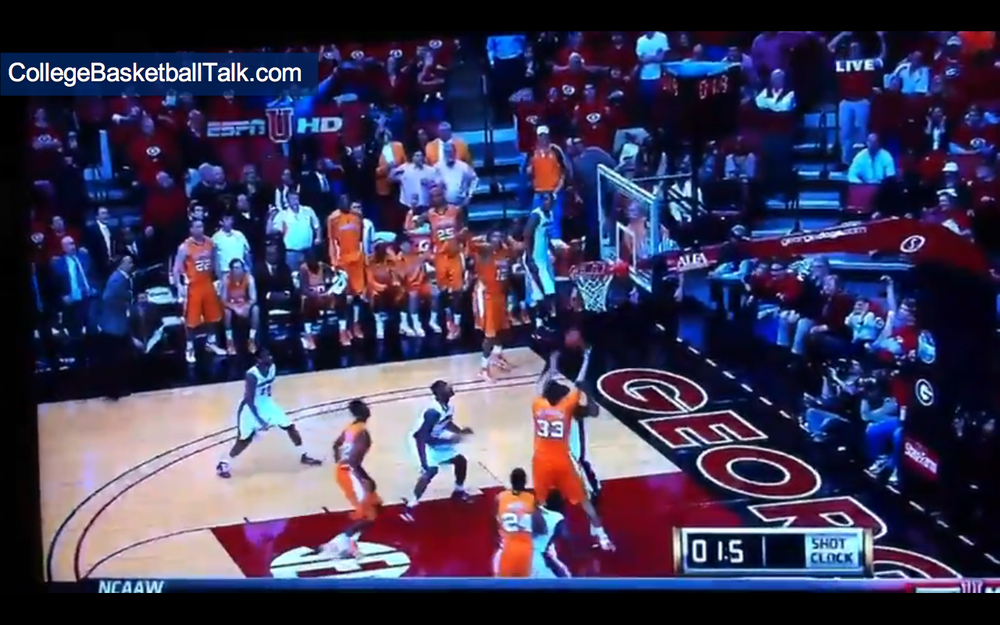 The ball is on its downward trajectory, and is almost touching the players’ hands. Williams’s arms are fully extended over and inside of Barnes’s arms; Williams essentially is right on top of him, and the position of the Georgia player suggests that he already is starting to be pulled over backwards by the Tennessee player: Barnes’s right foot has inched slightly backward, and his right arm is going back, not forward. Barnes is trying to keep his balance as the leaping Williams goes over him. 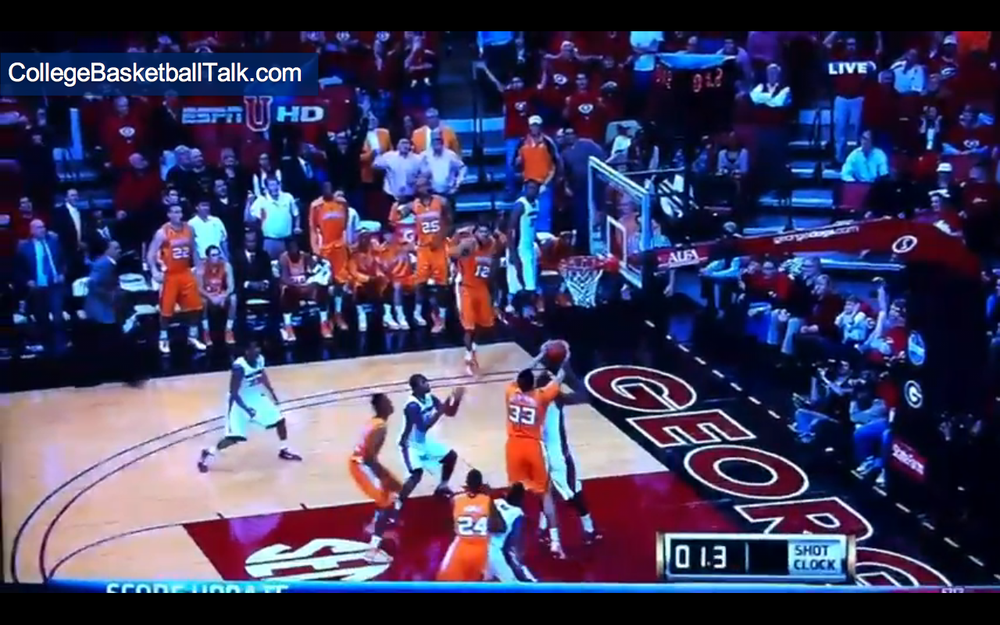 With 1.3 seconds showing on the shot clock, Williams has his hands on the ball. Williams’s right arm is inside Barnes’s right arm, and the position of the Georgia player’s feet indicates that he is off-balance.

Throughout the rebound, Chris Barnes is in his spot on the court. The extension of Brian Williams’s shoulders and arms, and particularly his right shoulder and arm, clearly hinders Barnes’s freedom of movement, particularly on his right side. It is clear from the position of Barnes’s feet and his subsequent fall that Williams displaced or pushed his opponent. These actions by a player attempting to attain a rebounding position are impermissible, according to the rule.

There are other quarrels to be had with last evening’s late-game officiating---Rule 9, Section 11, Article 2, deems it "a violation when a try for field goal does not leave the shooter’s hand before the expiration of the allotted shot-clock time," for instance---but this was the play that decided the game; as these events unfolded, the score was tied and time was expiring. Had Williams’s basket not counted, the Bulldogs would have headed to overtime on their home court.

I don’t claim to be an expert; maybe I’m misperceiving these images or misreading the applicable rule. What do you think?