Unlike most of the folks here, my early years were a largely football free existence.  Both my parents had earned degrees from UGA, but had done so in their early 30's and, so, did not form the rabid bonds to the institution that the average college-age attendee might.  They were clearly sports fans but were more absorbed in the professional sports arena and, as a result, I formed a strong bond to late 80's Braves baseball and later the Atlanta Falcons as led by Jerry Glanville (not the best starting point for an infatuation with sports, obviously). My boyhood sports idol was this gentleman: 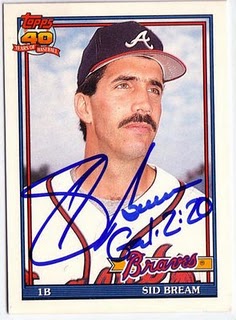 ..... so I definitely developed a strong need to experience sports success in some way (I still love the way Sid would lumber around the bases though).

My family had no consistent collegiate sports allegiances.  One grandfather had gone to Georgia, the other to Georgia Tech.  There were members with Clemson, UNC, and South Carolina ties.  With my parents checked out of collegiate sports altogether, at the age of 12, I went out in search of college fandom...

I.   A Wanderer Sees the Light

Given the generally poor performance of area teams at the time, my lack of any serious ties, and the fact that I was a teenage idiot, I became quite the bandwagon jumper.  I would switch rooting interests at the drop of a hat.  This probably explains my utter disdain for bandwagon fans since I have about as much respect for them as I do for that teenage version of myself.  Nonetheless, the delicious, meaty center of the 90's passed in this fashion.

I had little direction in terms of where I wanted to attend college.... I simply knew that I wanted to and must attend (or face the wrath of my parents).

One night during the beginning of my junior year in high school, I got into a giant fight with my Dad.  I got in the car and took off.  I had a blast speeding down 316 that night (which was a good thing since my Dad canceled my insurance and I lost my car for 2 months immediately afterward).  I had no particular notion of where I was going, but I just kept driving down 316.  I had lived 30 minutes away literally my entire life and I had never been to Athens.  From the minute I crossed over the loop, I was completely hooked.

Athens is a beautiful and unique city at any time of day and any month of the year.  But there is something altogether different about Athens on an early October night.  The heat is still hanging in the air but is cut by the occasional breeze.  A mixture of junk food hole-in-the-walls, open door bars, vegan meccas, and the grass on North Campus permeates the senses. These smells that are always there take on a special ability to waft through the air on those kinds of nights.  That indescribable yet instantly recognizable combination that, to me, represents the soul of Athens is what I've most loved in the years when I've lived in Athens and what I've missed most when I haven't.

After walking and driving around campus and downtown for at least 3-4 hours, I went home to accept the consequences of my foolishly short sighted actions.  But the next day I requested an admissions packet from the University of Georgia.

It was the only school to which I applied.

II.  There Is A Light That Never Goes Out... Okay, So Sometimes It Does.

So all went according to plan.  I got into UGA and enrolled 2 weeks after my high school graduation.  That summer was a great time to be on campus because it was virtually empty and I got to experience everything separately from the incoming freshmen.   I made some friends and began frequenting some places that were completely foreign to me. Places which aren't there anymore, but were an integral part of the Classic City fabric for me circa 2000.  The Velvet Elvis, Extreme Burrito, Above Bookstore (where I once met the only Big Ten fans I ever liked... A band from U of M that slept on the floor in my dorm lobby after their show).

When football season was coming up, I entertained some vague notions about going to games but still had no concept of tailgating and what all the fuss was about when people talked about seeing a game "Between the Hedges."  Despite my lack of knowledge, (and much to the chagrin of my 10 massive Dawg fan dorm-mates standing outside Stegeman that August) when the freshman ticket lottery numbers were pulled, mine was the only one that was called.  It's became pretty obvious to me at this point that God wanted me to be a Dawg.

Over the course of the next two years, dawn until darkness every Saturday was Dawgs and Dawgs only.  I threw myself into Georgia football with a vigor that could only be born of years of wandering and then finally finding a team of my own which I could throw all my passion behind.  In that first year (Jim Donnan's last) I attended every home game.  Made my way to Jacksonville.  I blew my entire paycheck to go to the Oahu Bowl.  I cursed when Quincy Carter zeroed in on the other team all season like I'd been following Georgia my entire life.

I only missed one home game those first two years.... and of course it was the Hobnail Boot game.  I had sold my ticket to another student for some reason (the one true regret of my life).  But there I stood in my apartment when we broke their nose... jumping up and down so hard with my friend Geoff that I thought we were going to break through the floor.  I had finally become a true fan... a fan of my own team... a fan on my own terms.  (Not So Stealthy Editing Note: As rbubp points out in the comments this game actually took place at Tennessee.  I can say in all honesty that memories from my first two years of college are often hazy. But I do remember thinking I was missing the game... even as I watched it.  And I sold a ticket to something to a guy in my Elizabethan Poetry class that week -- I wonder where he was that day?  It troubles me to think about the state my brain and liver must have been in at the time, but I suppose that, too, was part of the journey).

But like all good things, this time in my life had to come to an end.  Like many 18-19 year olds, I made some decisions of which I am not particularly proud.  One of these led to me being asked to leave the University I had come to love so much in so short a time.  As I left Athens (headed for Berry College in Rome), I left with a deep and abiding love for the Georgia Bulldogs and a passionate resolve that I would return.

While at Berry, I met my future wife (a Florida State fan from a family of Tech fans).  We were married the summer after I graduated and as we began to plan for our future family, I knew what I had to do.  Over the course of the next year, and against the objections of her parents, I began to turn her into a Bulldog.  Beginning with Coach Richt's ties to FSU, I convinced her to start following my beloved Dawgs.  In her first day in Athens, she saw DJ Shockley dismantle Boise State.  We went to several more games over the next two years and, to my surprise at the time, she passionately took issue with my early support of Joe Tereshinski III and demanded Stafford be put on the field.  When the Bulldogs came back to beat Virginia Tech in the 2006 Peach Bowl, she left the Georgia Dome a confirmed Georgia fan.

In late 2006, I somehow managed to get myself admitted to graduate school at UGA.  As teachers early in our career we didn't have much money so we were lucky enough to move into family housing where we lived for 3 years.  Shortly after moving in, my wife informed me that she was pregnant.  Aside from the normal joy of an expectant father, I quietly resolved that I would not let my son wander the same wayward path of fandom as I had.

On September 29, 2007, my son, Trey, was born in Athens.  As he came into the world, the first sound he heard was Larry Munson on the Georgia Radio Network broadcasting the 4th quarter of a win against Ole Miss in which Thomas Brown (with whom he shares a given name) lit up the Rebels for over 150 yards on the ground. The doctor was not happy about having the radio going, but my wife insisted.  I have never been more in love with her.

Since my wandering days of early fandom, I have attended, been kicked out of, and graduated from the University of Georgia.  I have gone from being a bandwagon fan of the highest order to being a fan so sold on one team that I insisted Joe Tereshinski would lead us to an SEC championship.  I may not have the long standing fanaticism of some of the Bulldog faithful, but I became a Dawg on my own terms which, while unnecessary, certainly provided an interesting journey.  The primary drawback being that I have had to live the "glory days" of Georgia football as a time traveler from the future looking back.  I have turned an FSU fan into an ardent Bulldog and pissed off her entire family.  I have experienced the joy of fatherhood and the joy of sharing my love for UGA with my son.  And I somehow even managed to get two old alums (very much set in their ways) to begin following their alma mater's football program... 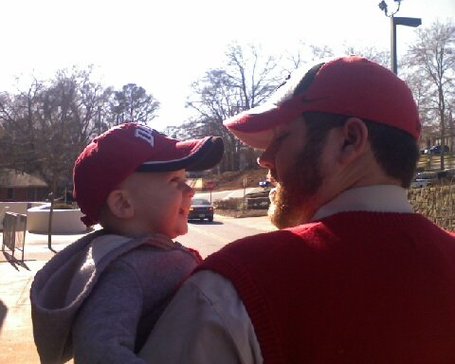 Happiness is going with your child to more Georgia games in his first 2 1/2 years than you did in your first 20.

Thanks to Kyle for letting me relive some of these great experiences.  I look forward to continuing to read about all of yours.