Off the bat I have to say I've enjoyed everyone's Dawgography thus far.  I'll try to keep the momentum rolling, but pardon me if I get a little bit wordy and tangential.  It's just that I'm probably a little bit older than most of the people who are regulars and who read this particular blog, so I've got a few years to draw upon when selecting some of the events that shaped my Dawgliness.  Actually, this topic is a bit of a redux.  Last year, when Kyle took his vacation he asked a few of us to contribute to Dawgsports, that was the topic I chose.  So, when you are in the twilight of I'm actually older than fresh dirt, middle age, middle-middle age, adolescence, you can get a bit verbose.  I find this to be treacherous, because the more I write, the more I tend to screw up. 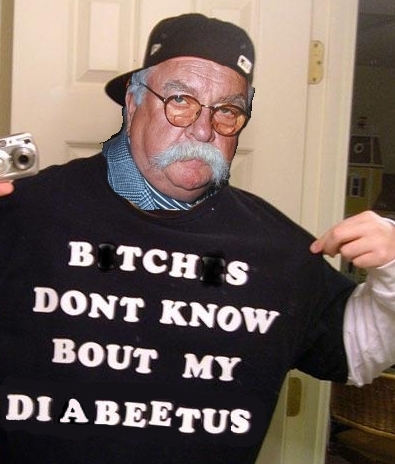 My freshman year at UGA began in the summer of 1980.  I very nearly did not attend college in the first place because, still unknown to my parents to this day, I contacted an Air Force recruiter and was a dried up Bic pen away from signing on the dotted line.  I was really conflicted that spring, having graduated from Oconee County High School as early as possible.  I just didn't feel I was mentally ready.  In a nutshell, I was still a pin head.  With a capital "P."  However, I took my S.A.T. and got accepted despite my 79.5 high school GPA.  Try that today, youngsters!  I enrolled in the summer of '80, barely survived freshman math and history, and rolled into fall quarter with a little more confidence.  During the fall of 1980, UGA still seemed  kinda' like a big 'ol high school in many ways.  I kept running into the same folks I was trying to escape from high school, but quickly made new friends.  Back in those days, we'd register for classes Analog Style at Stegeman Coliseum.  What. A. Night. Mare.  I managed to find myself in a freshman overflow English class in the basement of Park Hall.  I was the only non-jock in the entire room.  Half the football team and most of the incoming freshman basketballers were there.  Who sat next to me?  Dominique Wilkins.  I actually helped him a time or two in class, teaching him the dangers of dangling participles.  A few years later, when I was working one night at my job at the now-defunct Kroger on Broad Street, 'Nique stopped by.  He saw me behind the customer service desk, recognized me, asked me how I was, and produced two tickets to an Atlanta Hawks game, behind the bench.  He was a Rookie that year.  I didn't get to go because no one would take my shift the next night.  Regrets?  Oh, I've had a few...

Anyway, Dominique Wilkins is a class act in my book. 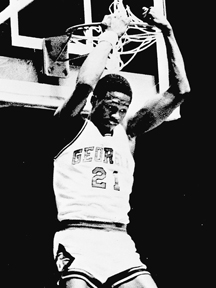 I'd like to think in some small way I helped make this possible...

On to some football, 1980 style.  I'm not about to recap every game, just the ones that made the biggest impression.  Let's start with September 6, 1980 in Knoxville, Tennessee.  I don't know how I got there.  I don't know where the ticket came from.  I remember that I rode up in a red Winnebago that was about 3 cylinders short of a V8.  It was the hottest, most humid (and I live in south Florida) and still-calm-breeze less night I can ever recall.  But I remember from the perspective of my horrible seat was seeing Herschel Walker's first touchdown.  It was a blur, but I remember him popping upright as he entered the end zone while Bill Bates ass was still pointing towards the North Star.  I remember Tennessee fumbling right in front of us on about our 5 yards line as the Vols were going in for the win.  I remember helping to fix the carburetor on the red Winnebago just over the Georgia state line with a piece of chicken bone when the butterfly got stuck.  I remember flopping into bed around 5 A.M. and not sleeping for days.  Freshman don't play like this. I was soooooo jacked.  Tangential... 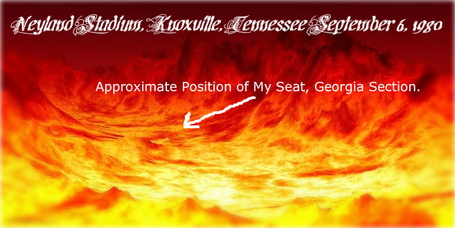 Later that year, what really stood out (besides the obvious miracle in Jacksonville which I nearly missed because I was actually in the tunnel heading out of the stadium) were these games.

What really stood out in my mind that season was the South Carolina game.  Herschel's touchdown run is the greatest single play I have ever seen in person at Sanford Stadium.  And the fact that George Rodgers won the Heisman trophy in 1980 is still a travesty.

h/t GhostofErkRussell...Georgia's archivist on YouTube.  Cue it up to 3:16.  You're not wasting time at work, folks.  You're getting a quality education. 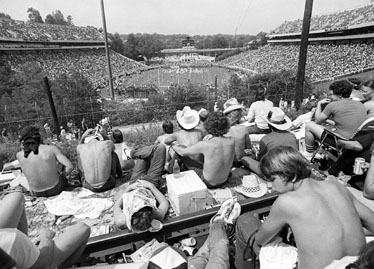 I was so blessed to not only be alive in Athens, GA in 1980, but to be a student.  It was incredible.  There was a confidence that seemed to permeate the campus that was, I suppose, success by osmosis from the football team.  And you just knew that our championship run wouldn't just stop at a one.  1981 was tough because we lost to Clemson at Death Valley.  I remember Buck got booed on the first homegame after that loss.  He had not played well, but you just don't boo a Georgia player unless his name is:

The 1982 season was awesome, except for that last game. Again, I don't want to write a Tolstoy novel here, but here are the highlights in my mind:

The 1983 Sugar Bowl against Penn State to secure a 2nd National Title in three years is my second biggest disappointment in the Dawgography of DTD.  We had more talent all-round than in '80.  But we didn't have Erk Russell coaching us up on defense.  I'm convinced if we had Erk on the sidelines that day, we would've beaten Penn State.

Other memorable games as a student:

By 1984 the bloom was off the rose after the success of the Herschel era.  But, by my calculations I was only half-way through my Georgia career as a student (it took a while for me to get that diploma that is written in Latin because I stumbled through 4 quarters of the dead language and to this day I don't know what the hell it says, except for "Universitatis Georgiae", "Bachelor of Arts", "my name", and "Fred C. Davison.").  All-in-all, the beginning of mediocrity.

1985, after we lost to 'Bama when it looked like we had it won bascially was my last season as a student in Athens.  Now, I love Vince Dooley.  Always have, always will.  Be he probably should have become the A.D. full-time after that season and hired an up and comer.  This, to me, was the descent into a prolonged period of phutball purgatory.  The 90's really began in the late 80's (except for some "W's" over Florida).  And something happened to me as well.

While I was career tracking in the 90's, I was mainly doing so in Florida.  And I became *gasp* apathetic by the middle part of that decade to the Georgia Bulldogs.  Oh, I watched every chance I could get from afar, having moved to the south Florida area in 1993.  But losses were becoming too commonplace and I think the athletic department became complacent as well.  The Goff years were difficult, especially for a displaced 'Dawg amongst Gator Nation down here in south Florida.  And make no mistake about it:  The breakdown is probably 80% UF, 18% FSU and 2% Miami.  I've been hearing it, except for only three years since '93.  My neighbors are Gators.  My co-workers are Gators.  The canal in my backyard is full of Gators, the grocery store is Gator stuff everywhere.  Every third car has a Gator tag.  So, while we were on our way to becoming South Carolina mediocre in the 90's, I essentially dropped out.  Yeah, I watched, but losses didn't crush me like they did a few years earlier or like they do today.  Am I a bad Dawg?  Please let me know in the comments because I do feel a guilt.  I guess one day, there will be a judgement and it'll look something like this: 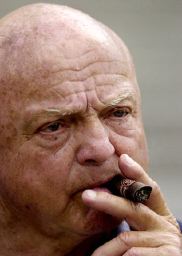 We'll let you in, Dave...but you ain't getting a cigar until you repent against the sins of the 90's....

That was my confession.  I strangely feel better.  But then again, I just took some Gas-X about 10 minutes ago.  Regrets?  I've had a few...

It's simple.  I've got to get a job closer to home.  By closer to home, I mean anywhere north of Valdosta, West of Charlotte, East of Jackson and south of Lexington.  I miss the red-clay hills of North Georgia.  I miss good bar-b-cue.  I miss bad bar-b-cue.  I miss going into a breakfast nook and being able to order up a bowl of properly cooked grits.  I miss my family.  I miss the four-seasons of the year.  I miss cheap homeowner's insurance premiums (my hurricane insurance alone is about $2,000/year).  I miss walking into a bar and knowing that most of the patrons bleed Red and Black, not Orange and Blue.  I miss the muddy Oconee River.  I miss getting to see the Braves on cable every single night.  I miss friendly people who are sincere.  I miss ready-made sweet iced-tea in every damn restaurant you walk into.

How do you fit in?  I dunno.  Maybe you know someone who knows someone who can help me pack up and move.  The economy is tough, and jobs in my profession are even tougher...but there are some out there from what I hear.  What do I do?  Here's a clue:

Who would you rather get your weather from:  Me or Dagmar?  Anyone know any news directors in the ATL?