I wish the story of my University of Georgia fanhood was more unique. I would love to be able to say that I am a Georgia fan because I was once saved from a raging river by a heroic white English bulldog. Subsequently, I pledged my undying allegiance to the school that used that magnificent animal as its mascot in a sign of gratitude. Or if that was not spectacular enough a story, I could perhaps say that I was found on my parent’s doorstep as an infant wrapped in red and black robes with a glowing Power G on my chest. Knowing I was sent here from an alien planet, my new parents then took it upon themselves to set me on a path to one day root with all otherworldly powers (given to me by Earth’s glowing yellow sun) for the University of Georgia. There could be any number of crazy circumstances that combined to launch me into a lifetime of barking, cheering, and tearing up at the opening notes of the Battle Hymn Solo.

However, none of those extraordinary tales would be true. Like so many others, I learned how to be a Georgia fan from Mom and Dad.

I truly was born into the University of Georgia, the son of parents who met at UGA during the Herschel years. My mother was teaching while completing her graduate work; one of her students was my father. Two weeks before Herschel willed the Dawgs to a national championship, they were married. Even though my Georgia roots do not go back any further than one generation, they became very strong in that short a time. My father was, and still is, one of the biggest sports fans I can imagine existing. He loves everything there is about athletic competition. As a former athlete himself, he has a great appreciation and knowledge for all sports. My mother, having grown up in the heart of SEC country, already had an affinity for football and baseball. Both of them quickly became devoted fans of the Georgia Bulldogs, a trait which was passed on to me.

By all accounts, I attended my first Georgia football game in September of 1986 at the age of about seven months. Even at that young age, I was being primed for a life of rooting for the Red and Black. When most kids were being taught their ABC’s, I was learning about Fran Tarkenton, Charley Trippi, and why the color orange was pure evil. That last one stuck particularly well. I don’t wear any shade of the color, and I hate Florida, Clemson, Tennessee, and Auburn. I even have a gnawing feeling that the University of Texas cannot be trusted. (I also have trouble rooting for any school with "Tech" in its name. Sorry, Hokies. Nothing personal.) At every home game, I had a seat on my mother’s lap waiting for me. When I got back to our house, I fell asleep beneath a painting of Vince Dooley being carried off the field at Sanford Stadium. (Seriously. It still hangs above my bed at my parent’s house.) 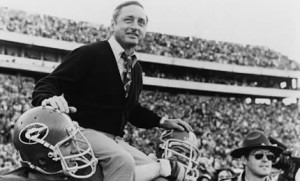 Some people sleep under pictures of religious figures. I sleep under a picture of this man. Draw your own conclusions.

Even though I was raised on stories about the glory years of Georgia football, most of the 90’s were not the best time to be a school aged Georgia fan. To an elementary schooler, nothing is more important than saying you cheer for a winning team. I went to school with plenty of bandwagon jumping Florida "fans" who took every opportunity to remind me which team was having the better run. While they flaunted high scoring victories and SEC championships, I was stuck watching ESPN every Sunday hoping to see that the Dawgs had snuck into the bottom of the top 25. I made it to Jacksonville a few times during that putrid stretch, but the only good memory I have of those trips was winning five dollars on a scratch off lottery ticket.

Fun, but it didn't quite take the sting out of yet another loss.

Luckily, by the time 2001 was rolling around, Mark Richt, David Greene, and David Pollack had arrived to bring the storied tradition of football at UGA back to life. I remember watching the Hobnail Boot game at a family reunion and thinking to myself, "we never win those games". Things were beginning to change. I was sitting in the upper deck, even with the goal line at South Carolina when David Pollack did something which I still can’t accurately describe to swipe the ball out of Corey Jenkins’ hand for a touchdown. I was actually looking down the middle of the field wondering where the ball went when I heard my Dad screaming like Jack Woltz when he found Khartoum’s head in his bed. A few weeks later, my head was buried in our basement couch when Greene broke the huddle, 4th and 15 at Auburn (I hate Auburn) with a trip to the SEC championship game on the line. I could barely stand to look when I heard my father say, "If he isn’t sacked, we will win", and jumped so high I swear I hit my head on a ten foot high ceiling when Michael Johnson proved him right.  By the time Decory Bryant blocked a punt against Arkansas, it was official; Georgia was roaring back to prominence right as I was making my way through high school. 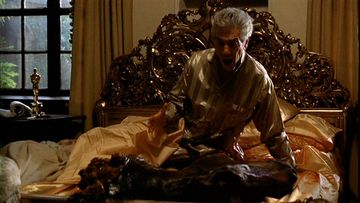 South Carolina 2002-Kinda like this, but in a good way.

I don’t want any of you to think that only considered Georgia to be about football. While it is true that most of my early memories of cheering for UGA involved football, the university became more than just a football team to me as I got older. I started to follow and root for other sports at the school. As a swimmer, I would make my way to Athens for the occasional swim meet and for the team’s yearly swim camp in the summer. I kept up with the tennis team and with the professional performance of former UGA golfers. At the same time, I fell in love with everything about Athens and UGA. We were never big tailgaters at football games, so my family spent a lot of time at places like The Grill, the Spaghetti Store, and DaVinci’s. Whenever the opportunity arose, we would just wander around downtown and the rest of campus. It didn’t take long for Athens to become one of my favorite places on the planet. As soon as I had a good grasp on the concept of going to college, I knew that Georgia was the only school for me.

There was one brief moment of indecision, however. Like I mentioned before, I swam competitively throughout high school. Something funny happened along the way-I got pretty good. As my senior year went on, I was being recruited fairly heavily by Emory University in Atlanta. While I wasn’t a world beater in the pool, I would have been a solid contributor for a Division III school, even one that regularly competed for national championships. I will admit, I was very tempted to sign with the Eagles. However, they weren’t the University of Georgia. Even though I would still be able to drive up to Athens on Saturdays, it would not have been the same. I wanted to be a part of UGA. I wanted to be a part of the "we" that Larry Munson always referred to. I wanted to experience what living in Athens could be like. Even though it would have been a great opportunity, I didn’t fall asleep every night under the watchful eye of a member of Emory’s staff. Quite literally, my love of UGA altered the course of my life. (However, I’d be lying if I said the fact that four years at UGA would cost the same as one semester at Emory had nothing to do with my choice). I walked onto the swim team at Georgia and haven’t regretted it for a second. 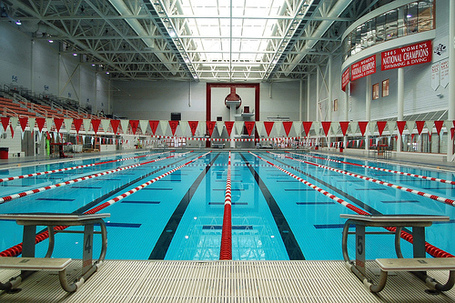 I didn’t think it was possible, but attending UGA only made me into a bigger fan. I used to sit down during football games. That changed quickly. I was taught by my elders on the swim team that the only time to sit down is halftime. The rest of the game must be spent on one’s feet, making life for the opposing team as miserable as possible. I got to see some great stuff during my time at UGA. Whether it was the look of disbelief on our collective faces after we went up by 24 points on defending champion LSU, watching friends on the tennis team win a national championship at the Magill Tennis Complex, watching teammates win SEC and NCAA swimming championships, seeing Joe Tereshinski III do a belly flop off the 10 meter platform, or being shocked at how much fun a gymnastics meet could be, my time as a student at UGA was nothing short of fantastic. These memories, and many others, will always be vivid in my mind. Of course, one memory stands out above them all; November 10, 2007. The most fun I have ever had at a football game.

See that red and black long sleeve waving at the :13 mark? That’s me!

Even though I enjoyed the crazy hedonism of the student section, I found myself regularly making my way back to the same seats I sat in for more than 20 years to take in games with my family. They are the reason I got started on this journey, and there are few things I enjoy more than watching and talking about a game with them. This season, I’ll be doing the same thing. Even though I’ve moved away from Athens after six glorious years, I’m going to be working in Atlanta for the time being. That means that I’m still just a quick trip down 316 from another Saturday between the hedges. So, come September, I’ll be right back in the same place I’ve been for nearly 25 years; sitting with family, surrounded by friends, and enjoying every moment in a place I was destined to be a part of.