We Bulldog fans are troubled.  In the past couple of years, we've seen our football program's performance go from disappointing to lamentable (to put it kindly).  Our ten-time NCAA championship gymnastics program failed to make it past regional competition.  Our men's basketball team gives us cause for optimism, but hasn't made the NCAA tournament since 2002, except for one first-round-only appearance resulting from an act of God.  I can't bring myself to describe the abomination that was 2010 baseball, and I won't say a word here about last week.

In many ways, I'm what some might call a mama's boy.  I think both of my parents are among the best people I'll ever know.  When I find myself troubled, just the sound of my mother's voice has a calming effect.  In adulthood, there are problems that arise that can't or shouldn't be discussed with one's parents, but I find I can converse with my mother about anything (books, movies, birds, words), and whatever troubles me becomes less stressful.

Unfortunately, I can't arrange a counseling session with Mom for all of you.  Instead, I suggest we seek solace in the voice of our alma mater (whether you are a fellow alumnus or have adopted her as your own).  Join me as I figuratively curl up into a fetal position. 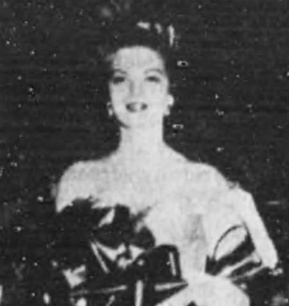 Miss Martha Moore in her junior year at UGA, February 1958.
Lovely and talented, but unable to sing lullabies and read stories to the entire Bulldog Nation.

The University of Georgia was chartered on January 27, 1785, as the first state-chartered college in the country.  Our charter is older than the United States Constitution.  The institution is bigger than any one sports team or season, bigger than any single employee or representative, bigger than you and me.  It is strong enough to weather our recent storms and will continue to provide you with comfort and joy.

So here are some of the ways my alma mater speaks to me and helps me through tough times.  Because this is a sports blog, I am focusing on sports-related traditions and recollections.  If you are so inclined, please share your memories and fondnesses in the comments.

My earliest memories of the University are of going with my parents and brothers to football games.  A typical day would take us to Allen's in Normaltown for lunch, where my mother would remark that the burgers tasted exactly the same as when she and my father were in school likely because the grill had never been cleaned.  If it was homecoming (as little kids, we rarely got to see the Important Opponents, for which games the additional tickets were used for my folks' friends), we would drive down Milledge to check out parade floats parked in front of the sorority houses (including, one year, the obligatory chicken-wire-and-wadded-crepe-paper depiction of an old lady in a rocking chair to represent Ole Miss).  After lunch, we parked near the Coliseum, next to what I believe was called the MacPhail Center, which conveniently had a playground behind it.  We kids were free to explore the area (the Coliseum with its fascinating restroom sinks, the Georgia Center and its mid-century modern architecture, the aforementioned playground) until it was time to walk up Brooks Drive to the stadium.  On the way, we would get tales of the Dairy Science department's retail creamery (which fortunately was still operational when I was in school), the concerts in the amphitheater where now stands the Grad Studies building, or other assorted reminiscences.  Every trip I make to Athens for a ball game ties me to those times, my family, and the excitement of a Major Event.

In 1980, when I was a high school freshman, I had so much pent-up energy after watching the Georgia-Florida game on television with my father that I tackled the accumulated pine straw in the front yard (after avoiding the chore for far too long) and arranged piles of it into giant numerals representing the final score.  I wish I had a picture.  This will do: 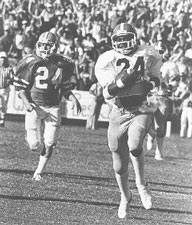 Run, Lindsay.  And in so running, comfort us all.

The Chapel bell was around for decades before the first intercollegiate athletic competitions got under way at the University, but its ringing following a Bulldog victory is a dignified tradition (unlike, say, littering trees with toilet paper).

Music to my ears.

[True story: A female acquaintance had gotten a bit tipsy before/during/after a game but wanted to ring the bell.  As she was lifted high off the ground, the fastener at the waist of her skirt came undone, and the skirt fell to the ground, leaving her dangling in nothing but a blouse and panties.  Recounting the experience later, she said, "I was horrified when it happened, but now I'm glad it did, because it makes such a great story."]

And speaking of music:

I was a Redcoat for a couple of years.  I won't bore you (further) or embarrass myself (further) with personal memories (do they still do the kazoo concert under the stands at the Gator Bowl in Jax?), but we field a great bunch of musicians year after year, playing songs, the arrangements for many of which are generations old.  And, of course, the sweet voice of Larry Munson (heard in the clip above) is a different kind of music, but inspiring, just the same.

Take heart, fellow Bulldogs.  Your University will bring you more joy than sorrow.  Be at peace and get ready for football season.  It's almost upon us.  And please, do yourself a favor and remember some good times.  It helps.  I promise.