As many of you know, I happen to be a girl.  So my journey toward Bulldog fandom (or fanaticism as has been suggested a time or two,) is a little bit different road than ya’ll.

For many ladies of my generation, the first real recollections we have are not of a football team or particular player, but of the cheerleaders or more specifically these cheerleaders: 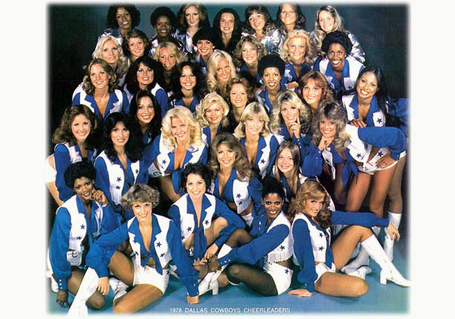 Women might have been breaking the glass ceilings, but their little girls weren’t dreaming of being Doctors and Lawyers and such, they were planning on growing up to be Cheerleaders.  My father’s choice of Dallas as his favorite pro team was probably as motivated by their cheerleaders as it was anything else.  Since neither of my parents graduated from an institution of higher learning, College Football did not exist in my world.  That is until Doug Flutie.  My father briefly attended Boston College prior to enlisting in the US Navy (to the best of my knowledge, there is no rhyme or reason for his enrollment at BC.)

Apparently for 40 some years prior to the arrival of Doug Flutie, BC Football was not exactly notable.  I remember the Hail Flutie pass.  (For a very long time, it was the only football play I knew by name, but I also knew what it was.)  So ok, it’s the mid 80’s and Doug Flutie has put Boston College Football on network television and life is good.  But Flutie was a Senior that day and the NFL guys think he’s too short to play QB in the big leagues so he’s not very highly ranked.  At that time, there was this new league called the USFL and they had a team that was quite happy to have Doug come play Quarterback for them.  That team was the New Jersey Generals and on their roster at the time, they had arguably the greatest running back in the history of the game, Mr. Herschel Walker.  Now I start hearing about Herschel, how amazing he is, how amazing the combination of Herschel & Doug will be and so on and so forth.  Guess who the favorite USFL team was in our house?

Between the Dallas Cowboy Cheerleaders and Doug Flutie, football was a big part of fall & winter while my family was stationed in the frozen wilderness.  We had ourselves a pee-wee football league and where there is football, cheerleaders are sure to follow.  I was a cheerleader for several years beginning upon my return from living abroad for a year through my middle school years, about four years all together.  In high school, I switched to the flag corps section of the marching band.  We had our own cheers, and ours were way better than theirs, plus our uniforms were way warmer.  Football season my freshman year was a blast.  It would be the last year I participated in a group organized to support a football team.

We moved shortly after football season that year.  Since I had also been raised on the Beach Boys, I was true to my school.  My exact words upon learning where we were moving to were "Eat Slime East Lyme???!!!!!"  I would move again just before my senior year began.  This move would bring me to Middle Georgia, Warner Robins specifically.  (Yes I know what’s going on, yes I dutifully signed the petition, no I don’t think there’s any chance WRHS will be known as anything other than the Demons for some time to come.)  As important as football had been in my formative years, I realized quickly that "Football isn’t a matter of life and death, it’s more important than that."

For those who are not familiar with Warner Robins, Georgia at that time there were two high schools, Warner Robins and Northside.  Good vs. Evil, Us vs. Them, Demons vs. Chickens.  Red and black vs. blue, white and you guessed it – orange.  I discovered Lewis Grizzard about this same time.  Between Herschel, Lewis & graduating from WRHS, I could only become a Bulldog.  But I was merely a casual fan.  Circumstances (aka my eldest child) prevented me from attending UGA as a student.  I partied my way out of Mercer instead.  The rabidness came later, after a few more moves.

I found myself back in the frozen wasteland.  Regret came quickly.  I missed southern gentlemen, southern manners, southern voices, sweet tea, bbq, chick-fil-a, football, every wonderful, beautiful, amazing thing that makes home, home.  I missed Georgia.  It was 1995, I lost my voice cheering for the Braves during the World Series.  I almost lost it again during the Peach Bowl.  That’s the game where the rabidness first surfaced.  I’m sure you all remember that game, I believe it was Ray Goff’s last as our head coach.  I remember barking at the television on all fours when Jason Ferguson picked up the loose ball and ran it in for the touchdown. I was certain we had just won the game.  I sat and cried in stunned disbelief when the Cavaliers ran the kickoff 83 yards for a touchdown to win.  I’ve been a diehard, dyed in the wool, don’t mess with my Bulldogs Georgia fan ever since.

I rarely get to attend games in person, but I swear they can hear me hollering all the way from here.  (My neighbors probably agree.)  Now that the kids are grown; I plan to be at more games.  Last year was one of my favorite seasons because for the first time, I got to attend two games in the same year and I finally found a way to watch the game "with" fellow fans.  It’s not the same as being in Athens with 92 thousand of my closest friends watching the red & black beat the tar out of the blue & orange, but it’s a pretty close second.  This post was longer than I thought it would be, but brevity never was my strong point.  RedCake, I pass the Dawgography baton to you.