Unfortunately, I could never come close to matching the eloquence Kyle displayed with his big lawyerin' words and Faulknerian Nabokovian/Brownian writing style. Fortunately, however, I'm comfortable in my south-Georgian plainspokenness, and don't mind trying to sound cool by embiggening my vocabulary, making up new and cromulent words at will.  And posting lots of pictures.  And writing in sentence fragments.  (Take that, all of my high school English teachers.) Therefore, I give you my VineyardDawgography: BBBBAWIDIBBD (Bulldog Born, Bulldog Bred, And When I Die I'll Be Bulldog Dead).

This is what VineyardDawg would look like if he were a muppet.  And if he were born in the 'hood. But I digress.

The year was 1981. I don't remember the exact game that was my first, but I have deduced from various pictures and comments made by my parents that it must have happened during the 1981 season. (God bless my parents, but my attention to historical detail probably doesn't come from them.  I was too young to remember the exact date of my first game, and when I called them to ask, the answer I got was along the lines of, "Oh, I don't know... it was sometime around '79, '80, or '81... or maybe '82.")

My parents had already been getting their 4 season tickets as alumni for a couple of years and going with friends, but one day, they finally decided that I was old enough to experience gameday in Athens.  They let me know that I would henceforth be going to home games with them on Saturdays, and I practically went into orbit.

Shortly thereafter, we packed up the car and went to the stadium.  I was so excited, I could barely hold a thought in my head or a shaker in my hand.  My parents were taking me to my first major sporting event, and had already told me stories about Georgia's players and successes of recent years past. We were going to watch Herschel, Belue, Hoage... and Dooley. I was dressed in a Georgia t-shirt, too-tight (and short) 1980's shorts, and a red and black Georgia hat, and we were sitting in the stands when suddenly, the crowd erupted as the team ran onto the field.  I cheered loudly and eagerly said to my mother, "Are those the Georgia Bulldogs???"

"No, honey. Those are the Macon Peaches, and this is baseball, not football.  We're going to the Georgia game tomorrow."

So began my obsession with Georgia. 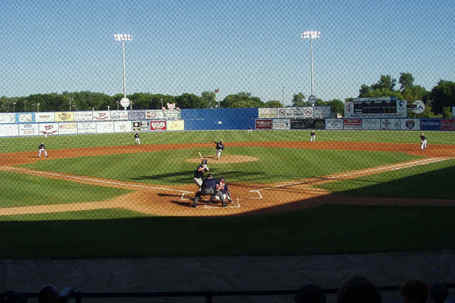 I'm sure you can see how, as a 4-year-old, I could have confused this with Sanford Stadium, which I had never seen before.

I don't remember the subsequent 1981 game that was my first, but I suspect it was the season opener against the Tennessee Volunteers, since the minor-league baseball season was obviously still ongoing in Macon at the time.  What I do remember is that, after the Georgia game, we walked over to the Coliseum to wait for the players to come out (there was no Butts-Mehre Heritage Hall then, and the team was transported to the Coliseum immediately after the game to shower and get dressed). I was standing in the front row when Herschel Walker came out, and I thought it was so cool, because he actually made time to say hello to people and sign lots of autographs.  I don't know if every autograph hound got his wish, but I know he hung around longer than he had to, and the class he demonstrated that day has stuck with me ever since. 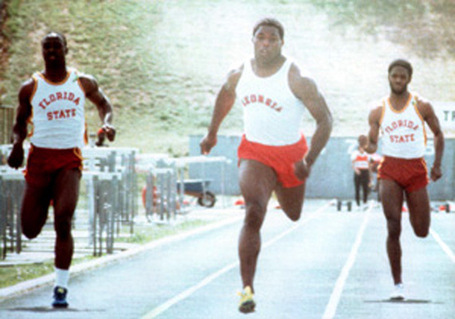 After all, he obviously could have made a hasty escape if he'd wanted to.

I don't personally recall ever missing a home opener since that time, though I'm not willing to authoritatively state that I will be in the stands for my 30th consecutive home opener on September 4, 2010.  (I haven't verified my attendance conclusively through the years, and making a 30-consecutive-year claim should be able to stand up to scrutiny). Sufficed to say, however, I have attended the great majority of home games during that time, accompanied by my parents, a litany of friends through the years, and now, Mrs. VineyardDawg. The University of Georgia is in my blood... it is part of who I am, and who I always will be.

If you've read more than one or two of my posts, I don't have to tell you who I think Georgia's biggest rival is.  (Hint: It's Florida... whom I hate.)  I could write an entire (long) post about why I hate Florida, but I will attempt to condense it down to just one section for the sake of brevity here.

When we face the Gators, we are engaged in a battle of good vs. evil, us vs. them, our way of life vs. theirs.  And when they come out victorious, it's an experience that is beyond soul-crushing, beyond wailing and gnashing of teeth... I lose a little piece of myself every time the Gators defeat the Dawgs.  After the last 20 years, you'd think I'd be used to it by now, but no.  My hatred for the University of Florida burns hotter than the fire of a thousand suns, and if we were to go 20-0 against them over the next 20 years, I would still hate them as much as I do today.

I know this because, during the first 13 years of my life, the Bulldogs did dominate the Gators. And even then, every victory over Florida was celebrated as a special event in our household, and every defeat was a cause for a special brand of mourning. The 1985 triumph over the #1 Gators stands out in my mind even today as a great win, but I also remember the 1986 loss and the grief that we caught from Gator fans that were friends of our family. 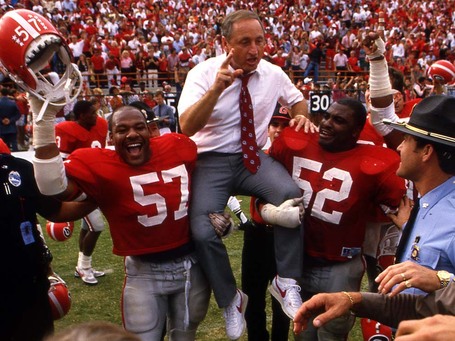 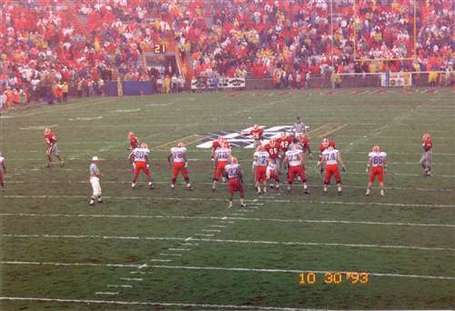 I don't even want to talk about this.

I can't tell you for sure why I hate Florida so much more than our other rivals... I just do.  It might be because much of my family is from central and south Georgia, and I was just raised closer to the hated Saurians.  It might be because some of our family friends when I was growing up were Gator fans, although they weren't overtly obnoxious about it.  For whatever reason, though, I could not have done as Southern Dawg did and overlooked a girl's Gator-affiliated status, even if she was as attractive as his now-wife is. In fact, my wife and I are now friends with a family who happen to be ardent Gator fans (and, yes, living in Athens).  In order to maintain that friendship, though, we do not discuss anything Gator or Bulldog-related for a few weeks before and after the annual clash in Jacksonville.  That's just the way it has to be.  Call me silly, call me irrational... just don't call me a Gator-lover tolerator.

I haven't yet had anyone question my self-imposed anonymity, but I assume this is because on the Intertubes, everyone just likes being anonymous if they can.  I did not always try to hide my identity when posting online, and ran a blog several years ago that got a moderate amount of regular traffic.  My employer is much more sensitive than I imagined, however, about having my name attached to publicly-available internet posts online, and I have gotten in trouble in the past for saying things that some people didn't agree with.  As a result, my blog has now been gone for many years, and I try to maintain anonymity as much as possible when posting online.  I don't maintain any illusion that it would be impossible to link my online name to my real name, but I just don't try to encourage it. That's pretty much all I can do.

And that's the reason that, although I applaud Southern Dawg for his openness, I cannot be equally open about my own personal situation.

The Best of Times

I don't think I have to cover the worst of times as a Georgia fan... we all know what (and when) they were, and it's always more fun to talk about one's best memories.  The following moments are what I remember as my "best times" watching the Red and Black in person.  They are not all games, necessarily... just "moments."  I present them in chronological order:

One of the goals of my life was to attend a game in every SEC stadium, and I achieved that goal in 2005 when I traveled to Starkville, MS, to fend off Hurricane Rita and watch the Dawgs dispatch the Western Division Bulldogs.  (I still have never made the trip to Ben Hill Griffin Stadium at Florida Field, but I'll be damned if I'm ever going to voluntarily surround myself with a stadium full of Gators unless the Dawgs are playing them. I wanted to go in 1994, but was unable to procure tickets.)

Now, my goal is to continue to travel with the Dawgs at least once a year.  I made it to Tempe and Stillwater, and am planning to travel to Boulder for the return match with the Buffaloes in October.  After that, I'll be going to Louisville, Clemson, and Eugene, God willing.

Well, that's about it for me... looks like podunkdawg is up next! I look forward to hearing a tale filled with brownies and references to insufferable Sooner fans. 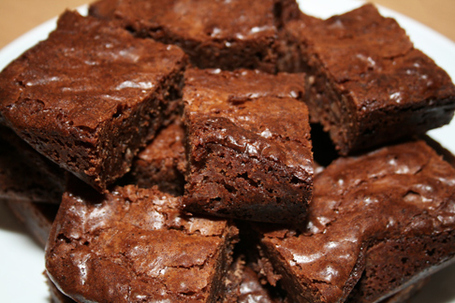 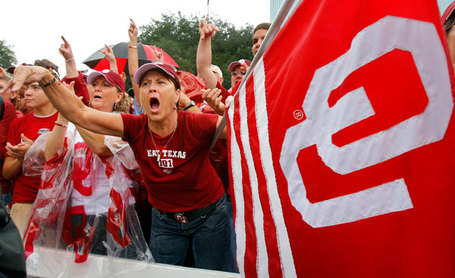 A possible sample of the forthcoming entry from podunkdawg?