Like the title says I am not a native Georgian, nor have I ever lived in the state of Georgia. My mom has lived all over the south, and my dad has lived in Alabama his entire life. The entire side of his family are Alabama fans. I grew up in Mobile, AL around a bunch of nutty bama and tigger fans. So how in the world did a man living on the "other" side of the tracks like me end up in the Dawgnation family?

My saving grace was the wonderful influence of my Grand-daddy. (G.D. as I like to call him now) Thornwell "Trigger" Lee graduated around in the 1950’s from the University of Georgia Forestry School. We were pretty close with him (his last name is where i get my name) and as we grew up we did a lot with him. He is the sole reason I’m a Dawg today. Growing up we never were college football fans, heck I never played any little league football. We didn’t start following college football till around ’99-‘2000. That’s right, I don’t remember much but I do remember my first exposure to the Dawgs was lead by Quincy Carter and Jim Donnan. It began sitting with my G.D. and enjoying the red and black on the field. From then on I became very interested in uga football but I didn’t become a true fan till a few years later.

In 2001 the Mark Richt era started in Athens. And one of the first things I heard about him was his faith and how he became a Christian while coaching under Bobby Bowden. Being a Christian myself this gave me an instant bond to him as a coach and another big reason to root for the dawgs. Thankfully Richt and the Dawgs gave me much more than that. David Greene came along and brought his own Goliath with him named Pollack. From then on every year we watched and kept up with the Dawgs as much as we could. My family became dawg fans quickly under the Richt era, but I am proud to say that I am the family fanatic. And being a dawg fan has given me some great memories along the way.

This almost could be a separate Dawgophraphy post by itself. But of course much like TKK I can’t stand Auburn. It stands from growing up in Mobile, Alabama during the good Tubberville years and they kept bama fans quiet (believe me the tide has turned ten fold now, and much harder to deal with) so it was Auburn fans who annoyed the crap out of me first. One of the Auburn games I remember was the 2005 come from behind loss which was as gut-wrenching as I can remember. I was on edge the whole game and the 4th quarter nearly had me put in a straight jacket. What made it worse was on the tiggers (not a misspelling) final td drive, my dad did something that I can’t believe till this day. On third down auburn made an incomplete pass to make it 4th down and 18. And my dad said "Yeah GAME OVER!!" Needless to say I lost it and yelled at him and was shamefully disrespectful, cause I knew it wasn’t over and I hate anybody making overconfident proclamations especially with the game in the balance. Well I don’t need to tell you what happened next but needless to say it was a long night. And my family still makes jokes about it whenever we watch games together.

My next most memorable Dawgfan moment was about 4 years ago when I got a chance to go to the Abuurn / Georgia game in 2006. It was at the barn and a friend of mine was a student there and got me a student ticket for 50 bones! I was stoked to go but nervous cause we hadn’t done that well up to that point that year, and they were top 5 at the time. Also it was my first road SEC game and I was going to be outnumbered. I though if I showed up in the student section wearing bright red, I’d put a target on my back for drunk fans to have fun with while their team was tearing us up on the field. So I’m ashamed to say, at this point if you will excuse the expression, my fandom balls hadn’t dropped yet, and I didn’t have wwcmrd?’s fan guide to help me yet. Can you pick out the UGA fan in that picture? 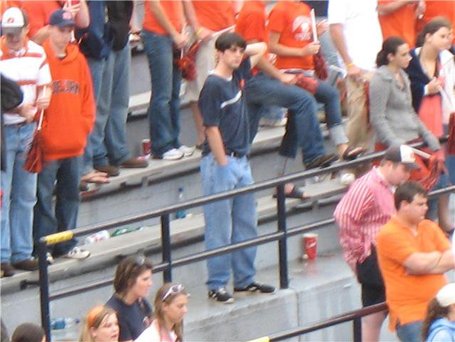 If you guessed the dweeb standing in the middle with the aww shucks look to him, yeah that’s me.Apparently everybody else could smell the "Dawg" on me because no one else was near me and it was crowded earlier in the game. I was sitting in the corner in the end zone and let me tell you it was an awesome experience. The game was so awesome and my friend had to leave, (plus it did rain off and on). It was one of the best fan experiences I’ve had so far.

You had me at the Georgia Hat

My last fan story is somewhat of a personal one that I’ll include at the risk of making this post too long, but here goes. While in college there was a girl I had noticed and taken a bit of interest in. The problem was she was a bit of a Tebow fan (and still is) so I wasn’t sure how it might work. Well one night she overheard that a bunch of us were going to be watching a movie in the patio room. After she got of work she went to her dad’s truck, took his Georgia hat (Picture in comment section) and wore it walking into the patio room with us. Message received! I was like a deer stuck in headlights fellas, and after a year and half married her on July 3rd, 2009. Needless to say I love her to death, and I’m buying her uga gear all the time.

I’ve enjoyed writing this guys and I hope you all enjoy reading it. I’ll put a few biographical tid-bits in the comments (I wanted to keep this part strictly dawg related) and if any of you are interested feel free to hit me up on Twitter @Suthrn_Shepherd, or add me on facebook (just write a note letting me know you are from Dawgsports) Its been a pleasure getting to know you on here, you guys make me laugh, think, and there isn’t another place like it. With that I pass the baton to vineyarddawg. GATA and Go Dawgs!