As you probably know by now I'm the guy charged with covering University of Georgia football recruiting in the least creepy way possible here at Dawg Sports. That generally entails some Signing Day coverage, and period Too Much Information spotlight pieces on UGA football commitments.

But since I know some of you really follow recruiting with a great deal of interest, I figured another outlet for that pastime might be a good idea. Hence the first of what I hope will be a weekly roundup of what's going on in UGA recruiting.

There's obviously been a good bit to talk about recently. Watts Dantzler, the son of UGA letterman Danny Dantzler, announced his decision to attend the University of Georgia on Sunday. I don't generally traffic in "inside source"  recruiting information, because I find it to be generally unreliable in tracking the decision making of 17 year old high school football players. At that age I didn't know what I was going to be doing 2 weeks in the future, and I doubt 17 year olds have changed that much since I was one. But as one source told me about 4 months ago "Watts Dantzler's commitment to Georgia has to be the worst kept recruiting secret ever." That seems to have been the consensus among those who follow recruiting for a living as well. I'll have a TMI feature on Watts in the next few days.

In committing Dantzler noted that "About two weeks ago it was real tough. It was Georgia and Auburn and they were right even with each other. But some things changed recruiting wise and it just dawned on me, there is no other place I want to play football." I would read that to mean that Georgia's 2011 recruiting class is filling up fast, and Dantzler was told that he should go ahead and make a decision while the scholarships were still there. As always, there will likely be room for some absolute top shelf recruits to take their time and make a decision closer to February. But it's worth noting that a lot of kids actually commit behind the scenes to the coaches before they ever go public with their intentions. So while the coaches may have things lined up nicely, there is a very good chance that we won't know precisely whom they've lined up for some time.

I had a TMI feature on quarterback commitment Christian Lemay all ready to roll out until he got into a little bit (or perhaps a lot) of trouble at school, and had to go to a disciplinary hearing which his father thought went well. We should know the outcome of that hearing in the next few days, though the maximum penalty for whatever Lemay did appears to be a 30 day suspension from school. Yes, I've heard the speculation regarding what his particular transgression was. No, I won't be discussing it here. I will say that I doubt somewhat that whatever he did will keep him out of the University of Georgia, a la Michael Grant. For one, whatever he did was clearly not an expulsion level offense. Two, he has plenty of time left to atone for it in the eyes of the admissions committee. Three, Lemay has an otherwise stellar record of community service and school performance. Finally, he's been upfront and contrite in admitting that he made a youthful mistake. But the Lemay TMI won't go up until this situation is sorted out.

Of course you already know about the commitment of Nick Marshall to play defensive back for Mark Richt and Scott Lakatos, while walking on for Mark Fox. Again I say, Mark Fox just got a national top 150 player without having to even give him a scholarship. He owes Mark Richt lunch, at a minimum. Nick Marshall reminds me of Bacarri Rambo in the sense that, when you watch him in high school he's the best athlete on the field regardless of position, and it's usually not even close. Frankly, he would have gotten more press as a corner  but for the fact that, though he's played the position some in high school, no one seems to want to throw anywhere near him. Marshall will likely play safety or corner in the Classic City, but could even play wide receiver if the need arose. Not to mention the fact that he provides a nice option at quarterback should injuries strike.

Not every player can wear the red and black obviously, and Georgia did miss out on two targets recently. Tucker linebacker James Vaughters committed to Stanford over almost every school in the country, largely based on the academic profile of the school and his confidence in Coach Jim Harbaugh. While it wasn't a surprise, this is part of a larger pattern that bears noting. Jim Harbaugh has done an exceptional job of recruiting in Palo Alto. This recruiting class is already full of nationally prominent recruits, and last year's was stacked by Stanford standards as well. USC's recent NCAA driveby pimp-slapping won't hurt his efforts either.

Georgia also lost out on Dorman, South Carolina wide receiver Charone Peake, who committed to Clemson. Peake is a lifelong Clemson fan who resisted the recruiting efforts of his friend Christian Lemay and instead signed with the home state school. I really like Peake's ability to make things happen in the open field and think he has great speed, but he's not one we just couldn't afford to lose. With Justin Scott-Wesley, Zach Witchett and Chris Conley already committed, we're well on the way to refilling the receiver depth chart after Kris Durham and A.J. Green leave at the conclusion of 2010. Yes, I am just assuming A.J. will be leaving. Any other state of affairs would just be extra butter on the biscuit at this point. 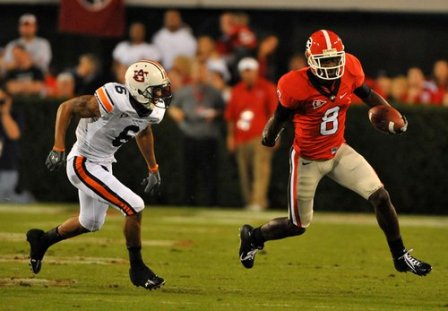 Dawg Sports Policy Directive #3,875: We hate Auburn at least as much as we love butter.

Finally, some in Bulldog Nation have been wondering if Mark Richt would ever offer Vernon Hills (Ill.) wide receiver Davaris Daniels, the son of former Georgia defensive star Phillip Daniels. Personally, I have gotten the impression that our coaches wanted to see Daniels in person, at a camp before extending an offer. Daniels hasn't made it to Athens to my knowledge, and no offer has been extended. Of course, I could be wrong about that, because I haven't talked to any member of the Daniels family. The same cannot be said for Chicago Sun Times writer Taylor Bell, who yesterday published a report saying that Daniels would announce a commitment to Miami today at noon, but that Notre Dame was his first choice and he wouldn't be headed to South Bend because he couldn't qualify academically.

As you can see from the comments section, some person claiming to be Phillip Daniels disagrees strenuously with this assertion, as does another commenter who claims to have been there when Bell talked to Daniels, and has video showing Daniels saying just the opposite: that his grades are fine. Daniels' announcement press conference has now been cancelled. Perhaps Daniels was in fact going to commit to Miami and didn't appreciate Bell spilling the beans. Who knows?

Hard to tell who to believe in this situation, but it could get very interesting. For one thing it's very early in the process to be certain that a guy cannot possibly qualify for your school. I find this part of the story very difficult to believe. As everyone knows, most schools accord scholarship athletes some leniency in the admissions process, and this time of year those prospects still have one or two summer school terms and fall and spring semesters to get their grades and test scores in line. In other words, if Davaris Daniels were such a hopeless cause academically that Notre Dame already knows he won't qualify, his scholarship list would be a lot less impressive. Because he probably wouldn't be able to get in much of anywhere else, either.

I'm also not too keen on scooping a kid's announcement by 24 hours and leading with, in essence, "it's because he's too dumb to get into the school many of you, my beloved Chicagoland readers, root for." Or perhaps that's just me. Until later, feel free to add your recruiting tidbits, wishlists and observations in the comments, and . . .