As this is done in contrast to the rivalry with Clemson, I must concede the lack of historical regularity.  We have played our neighbors slightly to the northeast much more than we have our neighbors to the north.  But while the rivalry with Clemson has been significantly more lopsided, outside of a run from 1900-1906, and during the 1980s Georgia has dominated "Auburn with a Lake", where no others losses outside of the aforementioned years haven't been bracketed by multiple consecutive wins both before and after.  But you have already been given a wonderful synopsis of strengths and weaknesses.

So without further ado, I'll lay out my case for hating that other batch of ugly orange...

The recent years have also seen the two programs fighting for championships on a regular basis.  Tennessee has represented the SEC East in Atlanta 5 times since 1997, while Georgia has gone 3 times between 2002 and 2005 (meaning every time we've made the SEC Championship game, we beat the Volunteers earlier in the season).  For Tennessee, 4 of their 5 SEC Championship game appearances followed a win over the Bulldawgs ('97, '98, '04, and '07, but not '01).  In the disturbed 2001 football season, a Georgia loss was all Tennessee had going into their season ending game vs.a then #2 Florida (postponed due to 9/11), which they won, becoming #2 before losing to LSU and costing them a chance to play Miami for a national title.  Suffice it to say, the winning team has a much better chance of winning the SEC East, SEC as a whole, and ultimately the national title, and the road to Atlanta is pretty much impossible for the loser considering yearly games with Florida and Auburn (for us) or Alabama (for them).   It is a make or break game for both teams every single season and has been since we reemerged as legitimate SEC title contenders.  Having that level of importance on a game, from both sides, has spurred the increased hatred of this rivalry.

As just said, the Tennessee/Georgia game has been a pivotal point in several recent seasons.  How does 1995 turn out if Robert Edwards doesn't get injured, and could a healthy #47 have ultimately extended the tenure of Ray Goff?  1997 saw Georgia go 10-2, beating Florida and finishing in the top 10 but losing to the Vols 38-13.  Meanwhile Tennessee won the SEC and faced co-national champion Nebraska in the Orange Bowl ranked #3 before going on to a national title the following season.  Does Jim Donnan's path change if we win Jamal Lewis' breakout game, or if Lewis is having that breakout game wearing Red and Black?  What happens to Phillip Fulmer if Richt doesn't come in and dominate their early matchups?  Does the Fat Man begin to falter without our rise to prominence?  Or what about Willie Martinez if David Cutcliffe didn't carve him up like a Thanksgiving turkey?  And let us not forget 2007.   Does a red hot Dawgs team upend LSU (who played very poorly in the SEC Championship game vs. Tennessee) and ultimately win a national title instead of finishing #2 without that humiliation in Knoxville?  Do we even go on that magical run with Stafford and Moreno without the desire for redemption from said humiliation?

In addition to the aforementioned Lewis and Edwards, games between the Vols and Bulldogs have seen the breakout performances of Herschel Walker and David Greene for us, while QBs Peyton Manning, Jonathon Crompton, and Erik Ainge had their first big games vs. Georgia.  What names from Clemson can inspire the immediate raw hatred or anger (or both) in you that Manning, Crompton, Ainge, and Clausen can?  Did we ever tear down the goalposts in relief after beating Clemson, like we did against Tennessee in 2000?  Clemson has it's share of great calls (Kevin Butler's FG among them), but does it have a "Hobnail Boot" or "my God a freshman"?  Does Clemson have the anger that can come from taking your own and beating you with them, like Chuck Smith, or Lewis, Cosey Coleman and Deon Grant, or Eric Berry?  Have they ever had some of Athens' own on their coaching staff, like aforementioned current DL coach Smith, or head coach Derek Dooley?  One must admit, the rivalry with Tennessee has begun to develop a level of hatred, from both sides and for both the team as a whole and numerous individuals (Kelly "The Future" Washington?  The Clausen family?  Even the neverending line of kicking Colquitts?); a hatred that just does not exist after demolishing Clemson 30-0 in their house in 2003 and seeing them flounder under Tommy Bowden and now Dabo Swinney like a weak sister.  As said above, Clemson is not, and other than a run in the early 80s, has not been on our level as a program.  They consider South Carolina a rival, as well as Tobacco Road schools.  Tennessee has Bama, Florida like we have Auburn and Florida, and are on a level historically that is much more consistent and compatible with ours than the Tigers.

While this rivalry may lack the proximity and much of the history that Clemson does prior to 1992, the amount of critical moments for both programs, some in the past but mostly in recent years, make Tennessee quite the rivalry.  It is and has been for much of recent history, and likely to remain so for much of the near future, a pivotal game deciding the fate of our season as well as theirs, and in many respects has grown into a heated and extremely important game/rivalry.  In conclusion, since "pictures are worth 1000 words", and for brevity's sake, I'll conclude my argument with the following. 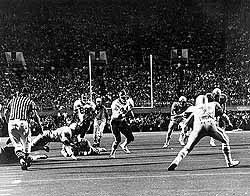 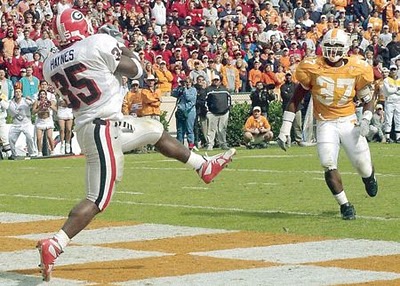 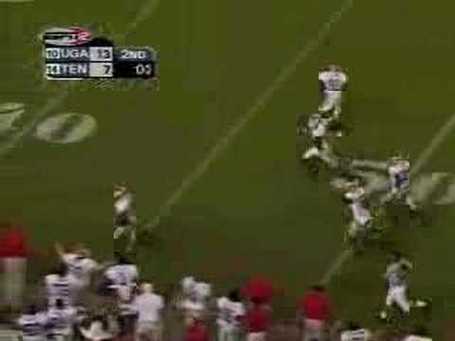 (tell me the following picture doesn't make you smile every time) 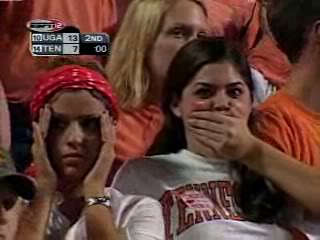 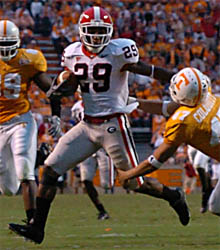 Or see the reaction of one of Athens' own on a big play....

In a game that ultimately ended with this moment of awesomeness....