By now, everyone with even a passing interest in college football has heard the rumblings about the Big 10+1 deciding to pull the pin on the grenade that will blow up college football forever.  (HT: Pat Forde) If the Big 10+1 were to grow to become the Big 10+4 or 10+6, it would set changes in motion that most certainly would not be able to be described as ripples, but rather tsunamis.

There aren't enough bits and bytes on the intertubes to thoroughly explore all of the expansion permutations and how they might shake out in the wake of radical conference realignment (but not the kind Kyle or others have been advocating). Instead, I'm choosing to only examine the best expansion scenario for the SEC, should the world change tomorrow.  How should the SEC keep up with the Joneses Delaneys?

I suggest using a solution that, to my knowledge, has not even been considered yet.  (Or, at least, recently.)

Right now, in May 2010, conferences all aspire to be 12 teams, for the sole reason that 12 is the minimum magic number set by the NCAA to hold a championship game.  And championship games, as we all know, bring in the lucrative additional TV money and increased attendance that everyone in the world is seeking. 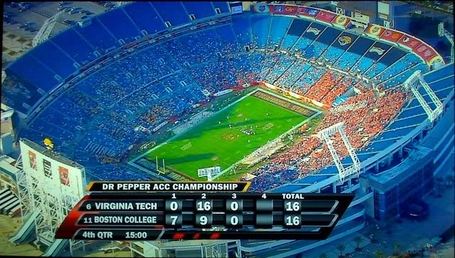 Well, most conferences' championship games do, at any rate.

If the Big (Number) decides that a Big (Larger_Number) is desirable, however, the mold has been broken... the template destroyed.  I recommend that no matter how much the other conferences in the world expand, the SEC should only expand into a 15-team, three-divison league.  I think the SEC will only expand if Texas is part of the deal, however, and you ain't gettin' Texas without Texas A&M.  So, the only real question with regards to the teams included in expansion would be who the 15th SEC team would be.  I drew up a scenario with Oklahoma being the 15th team, but I don't think the Sooners would come without their in-state brethren, so I added Clemson as the 15th team, instead.

Therefore, I give you my your new 15-team, 3-division SEC:

Each team will play the other 4 teams in its division, and will have 1 permanent and 1 rotating opponent from each other division.  Voila, you have an 8-game conference schedule, and you play every conference team at least twice every 8 years.  I've also preserved as many traditional rivalries as possible... but I'll get to that in a moment.

Is that method inequitable, somewhat arbitrary, and sometimes unfair?  You betcha.  The fair's in October.  If you want fair, go play rec-league soccer in Cobb County.  In the world of college athletics in 2010, it's all about the money, and economics says that the two division champions most likely to play for the national championship should play for the SEC Championship.

Now, to more minutiae regarding the preservation of traditional rivalries.  In the above scenario, I have set up the following permanent divisional opponents:

This alignment has the benefit of putting Tennessee in a division with more of their traditional rivals, in addition to preserving every other longstanding rivalry that survived the 1992 SEC partitioning.  Also, you know that if LSU goes undefeated in the SEC in any year, they'll have by god earned a shot at the national championship. (It's their own fault, though, really, for having major rivalries against Alabama and Florida.)

Any thoughts about this idea? I would love to visit Kyle Field in College Station every other year, and we'd all have good fun with the coincidental name, too.