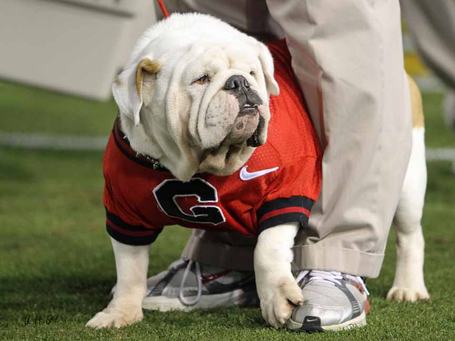 The entire dust-up stems from a recent interview in which the reporter from MDM quoted UGA VIII earlier this week and has made the rounds throughout the blogosphere and mainstream media:

"Russ, well you could never tell...I mean he has filled in admirably and all...and I guess he's a real Bulldog...he's just not a real white Bulldog..."

Russ, the 5-year-old, half-brother of UGA VII who died suddenly in November, 2009, has been the fill-in top-Dawg mascot for the Georgia Football team.  As such, he finished the season strong with a 2-0 record including an impressive ground attacking scorched earth policy steamroll, epic whipping, teh awesomest ass kicking "upset" victory over favored Georgia Tech (snicker).

Despite Russ' success, the owner's and keeper's of the UGA line, the Seiler's of Savannah, opted to retire Russ after his brief run with a direct descendent of UGA VII, perhaps citing youth and white-ness of fur.  However, it is quite evident that UGA VIII is not averse to speaking his mind.

Recently after practice, coach Richt uncharacteristically singled out the reporter, pointed briefly, and raised his voice to an unusually high pitch:

"You're a bad reporter.  UGA VIII has never missed obedience class and has not once piddled on the carpet.  You do that again, and you're not allowed back on this practice field, walking path, or even pet area."

The reporter, with about 20 witnesses including fans and other media members (unfortunately, no one had a damn camera phone), within earshot, replied,

"C'mon, coach...I'll play by the rules...I was just quoting the Dawg.  And I don't think that I was the only one (to quote) the dog.  Besides, how often does a dog even talk?  It's not like he's NOT going to be quoted."

"Let me tell you something.  That Dawg is a great pooch.  If that was my puppy, you and I would be going at it right now, and I'm not talkin' about slingin' poop..."

The editor of "Modern Dog Magazine" declined comment, as did the reporter.  Criticism of coach Richt for his handling of the incident in such a public forum has been far-reaching.