I’ve already told you what is afoot in Bulldog Nation, so I suppose it is time to take a jog around the blogosphere and see what is going on elsewhere in the intercollegiate sports world. Believe it or not, there is plenty to report; viz.:

I go back and forth over whether Fredo Corleone or Benjy Compson is the more accurate analogy for the Southern California head coach. Lane Kiffin’s brother, Chris, is leaving Lincoln to join his family in Los Angeles. How thrilled is he about working for his spectacularly successful sibling? Quoth Coach Kiffin the Youngest:

The No. 1 thing for me was going to work for my father. That’s what made it an easy decision for me. . . . Working for my dad is exciting just because I was raised always following him and watching his career — I just always wanted to work professionally with him because I know he’s really good at what he does.

That’s a ringing endorsement of the head coach right there. Seriously, if Monte disowned Layla’s husband, would Lame Lane be employable as anything other than the night manager at the 7-11 in the bad section of town?

No, he’s not visiting his mistress in Venezuela; in this case, he means it literally, rather than as a euphemism. Over the weekend, regular Dawg Sports reader Richard Schrade left on a seven-month sabbatical to do a through-hike of the Appalachian Trail. At last report, Richard was riding out the storm at Neel’s Gap, where the weather conditions look like this: 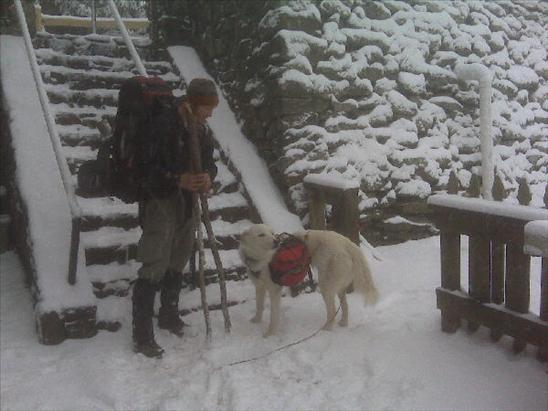 There’s a 30 per cent chance of snow in Birmingham and a 100 per cent chance of crazy in Paul Finebaum’s column. Bad weather in Birmingham caused the postponement of Alabama’s baseball game against Samford today, so the Tide should be rested for tomorrow night’s clash with the Diamond Dogs. For some strange reason, even though the game will take place between two SEC teams in Hoover, site of the SEC baseball tournament, the game will not count in the conference standings. That, though, isn’t the most bizarre news item to come out of the Yellowhammer State this week. Take it away, Paul Finebaum:

And who's to say that when the issue of Smart may arise again -- perhaps in a year or two if the Mark Richt tenure comes crashing down in Athens.

Certainly Smart had to think about that when the Georgia offer was made. However, I think his worth to Georgia will likely be higher, with perhaps another national championship at Alabama instead of being part of a sinking ship in Athens. And, of course, if Richt goes down, Smart might be battling his best buddy Muschamp for that one as well. Of course, others believe the job Muschamp really covets is the one in Baton Rouge, where Les Miles' ship appears to be shaky.

Does Finebaum even have an editor? If so, and that’s what made the grade, what wild-eyed baseless speculation wound up on the cutting room floor? Brian Kelly to Texas Tech, Tommy Tuberville to Florida, and Urban Meyer to Notre Dame in a round-robin coach swap, perhaps? Bigfoot replacing Myles Brand as the head of the NCAA, maybe? A sixteen-team Division I-A playoff with leprechaun line judges and unicorn referees? Because that wouldn’t be any wackier.

Meanwhile, back in the vile and wicked blogosphere. . . . Evidently, something was up with Bill Simmons, prompting a pretty big "whatever" from me, but Brian Cook (amazingly) was the measured voice of reason:

The lesson here, of course, is that no matter what you write, people are reading it, so you should probably get your facts straight before you put something out there, whether it be in a column, a blog post, a radio/TV appearance or even an online chat that focuses as much on actual sports as it does on reality television with a target demographic of teenage girls. I think we forget that sometimes.

That may be the finest combination of good manners and a good point in Brian’s blogging career. Good job.

The northeast doesn’t care about football. We who care about football don’t care about the northeast. Can’t we just agree to leave each other alone? Evidently, Rutgers is a serious candidate for Big Ten expansion, and not for the reason any sensible person would have an affinity for the State University of New Jersey. Rather, the desire to develop inroads into the New York television market fuels the league’s interest in the Scarlet Knights. Frankly, the whole thing just annoys me. Northeastern media elites have always carried far too much clout, beginning with the sportswriters in the 1920s and ‘30s who refused to give the Crimson Tide their due until they whipped Washington in the Rose Bowl and failed to recognize the Red and Black until Georgia regularly played (and won) games in Connecticut, Massachusetts, and New York, and continuing today with Bristol-based ESPN, which cannot get enough of the Yankees-Red Sox rivalry and still counts Doug Flutie’s pass as the watershed moment in college football history while ignoring comparably dramatic moments from that same season. If New Yorkers don’t like college football, fine. The whole point of federalism was to allow Georgians and New Yorkers to set different priorities on matters of taste.

We’re moving on up, just like George and Weezie Jefferson. The Georgia Bulldogs rank eighth in the latest SEC basketball power poll, which attests to the fact that Mark Fox has taken this program to the next level. When you started in the sub-basement, eighth in the league qualifies as "the next level."

Happy birthday to several of you. I may have forgotten Mark Richt’s birthday, but I’m not overlooking any of this week’s anniversaries. Today was Dr. Seuss’s birthday; Theodor Seuss Geisel was born on this date in 1904. (Incidentally, he published How the Grinch Stole Christmas in 1957, and, in that book, he has the Grinch grouse that he’s put up with Christmas for 53 years. Do the math.) Tomorrow, of course, is Herschel Walker’s birthday, which isn’t why I’ll be away from the office all day, but it’s reason enough. Finally, my daughter, Elizabeth, turns two on Friday. I’m pretty sure the "terrible twos" are going to be when we regret consistently referring to her as "The Princess."

You now may consider yourself fully informed. You probably aren’t, of course, but you’re not entirely without a basis for believing that you are, which is something.