It is no secret to regular readers of this weblog that I cannot stand the uniform start date. First of all, it’s not my fault that other people demonstrated the poor judgment to set up their universities in places where it’s cold all the time; my team shouldn’t have to bear the consequences of someone else’s suspect decisionmaking. Secondly, I don’t want to hear about it, because this is what my house looked like one week before baseball season began: 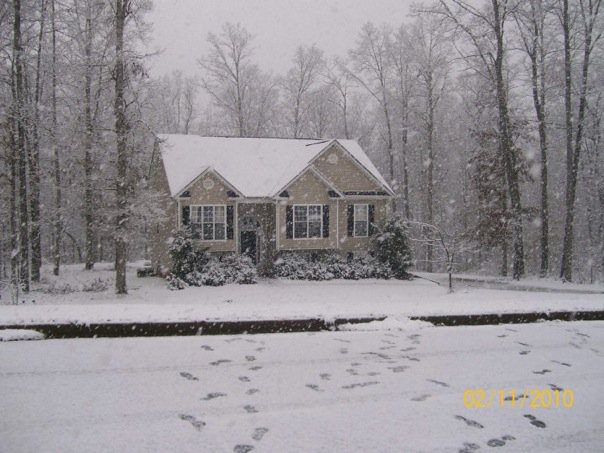 After having to wait longer than necessary for college baseball season to begin, I was especially pleased to see the Diamond Dogs play a Sunday doubleheader on opening weekend. I was only partially pleased with the results, though, as Georgia split the twin bill, getting the better of fellow visitor Duke before falling to host Baylor.

The Red and Black took an early lead in the first inning of the morning outing when Johnathan Taylor drew a leadoff walk and was brought the rest of the way around on a Colby May home run to left field. The Blue Devils answered in the bottom of the canto when a two-out Jake Lemmerman walk was turned into a run by a Michael Palazzone throwing error and a wild pitch. A subsequent Jeremy Gould double and Will Piwnica-Worms single tied the game at the end of one frame.

The second stanza saw only a Marcus Stroman double followed by a Brian Litwin RBI single in the home half of the inning to stake Duke to a 3-2 lead. Georgia offered an immediate retort in the top of the third canto: Todd Hankins sent a first-pitch single into left center field, swiped second, took third on a wild pitch, and came home on a Taylor single. May later doubled to make it 4-3 for Georgia.

Christian Glisson’s leadoff single in the upper half of the fourth frame forced a Duke pitching change and began what threatened to become a big inning when Kyle Farmer parked a one-out double into right field and Taylor drew a two-out walk to load the bases. Peter Verdin worked the count full before grounding out to strand three. The Blue Devils went three up and three down for the second straight stanza.

Georgia got back on the board in the top of the fifth canto when a leadoff single by May, a fielding error by Stroman, and a sacrifice bunt put two men in scoring position with one out. After Glisson was plunked, Kevin Ruiz sent the first pitch he saw to short for a run-scoring single. Farmer’s ensuing base hit plated two more to make it a three-hit, three-run frame for the Diamond Dogs.

The Blue Devils responded in the bottom of the canto, when a leadoff walk drawn by Litwin and an Eric Brady single allowed a pair of groundouts and a Gould base hit to score two. The sixth stanza was scoreless, despite the fact that the Red and Black had a runner on second with only one out, but Georgia generated a run in the visitors’ half of the seventh inning on a leadoff single, a stolen base, a runner-advancing groundout, and a sacrifice fly to plate Zach Cone.

Cooper Moseley succeeded Palazzone on the hill at the midpoint of the seventh inning after the Bulldog starter went six frames and allowed six hits and five earned runs. The Red and Black reliever made short work of the Blue Devils but the latest hurler from the Duke bullpen saw his first throw to home plate in the top of the eighth canto ripped into right center field by Hankins for a double. Three pitches later, Verdin carded the single that gave the Georgians a 12-7 edge in hits and a 9-5 lead in runs.

The Blue Devils inched closer on the stat sheet but not on the scoreboard in the bottom of the inning, when Lemmerman’s leadoff double was squandered by the next three North Carolinians to step into the batter’s box. The fifth Duke pitcher of the afternoon issued a leadoff walk to Cone on the first four pitches of the ninth stanza and the Georgia center fielder came home on a groundout and a pair of passed balls. Steve Esmonde required just four pitches to extract a trio of groundouts from the Blue Devils in the home half of the final frame.

That was more like it. The Diamond Dogs used three scoreless innings of relief pitching, a quartet of doubles, and a three-for-four day from Colby May to turn a 4-3 lead after four frames into a comfortable 10-5 triumph. The victory avenged Saturday night’s setback to set up a Sunday afternoon matchup between the Classic City Canines and the Baylor squad against whom the Red and Black emerged victorious on Friday evening. To the second game of the doubleheader we now turn:

A scoreless opening stanza was not without its excitement, as Verdin sent a first-pitch single to second base in the top of the frame before May grounded into a double play and the Bears opened the bottom of the canto with consecutive singles from the bats of Logan Vick and Joey Hainsfurther. Although an error put a pair of runners in scoring position, Chase Hawkins retired the next three batters.

The Diamond Dogs notched an unearned run in the upper half of the second inning when Cone carded a one-out single, made it as far as third thanks to a throwing error on an unsuccessful attempt to pick him off, and scored on a Ruiz RBI groundout. A pair of two-out singles in the bottom of the frame were canceled out when the lead runner was caught stealing.

Each team registered one hit per inning in scoreless third and fourth stanzas, and, after Verdin’s first-pitch groundout stranded two baserunners in the top of the fifth canto, Baylor began to make its move in the home half of the frame. Landis Ware punched a one-out single through the left side, took second on a balk, and advanced to third on the Vick single that forced Hawkins from the mound. Blake Dieterich came on and saw the Bear shortstop scored on a base hit.

Brett DeLoach drew a one-out walk on four pitches in the top of the sixth stanza and Cone followed that up with a first-pitch single, but Ruiz grounded into the double play that sent a tie ballgame to the home half of the inning. With one out away in the Bears’ turn at bat, Raynor Campbell was hit by a pitch and Gregg Glime drew a base on balls. Cecil Tanner took the hill in time to walk Chris Slater and a fielding error on the ensuing fielder’s choice allowed two runs to cross home plate.

A wild pitch sent Slater to third base and another unearned run scored when Vick reached on a fielder’s choice. The Red and Black went hitless in the top of the seventh stanza and the home team went right back to work, manufacturing a run on two singles, a walk, and a sacrifice fly to take a 5-1 advantage.

Georgia got one run back with two outs away in the home half of the eighth inning. A fielding error allowed DeLoach to reach base and take second, from which Cone brought him home on a base hit. The side was retired in sequence in the bottom of the canto, so the Diamond Dogs had one last shot. Glisson’s one-out single put a man aboard and a fielding error enabled Hankins to reach, as well. Taylor got on base on the fielder’s choice that put runners at the corners and brought the tying run to the plate. Verdin went down swinging on three straight pitches.

The second game of the doubleheader was a fairly low-scoring affair in which the Bears carded two more hits (11-9) yet committed an additional error (4-3) in a mistake-riddled contest. The Baylor hurlers did not allow an earned run and the Georgia pitching staff conceded only three such scores. Bulldog batters hit into double plays in the first, sixth, and eighth innings. Zach Cone continued hitting at his torrid pace, going four for four and notching the Classic City Canines’ lone extra-base hit of Sunday’s late outing, but Johnathan Taylor, Colby May, and Brett DeLoach between them carded no hits and batted in no runs.

Given the youthfulness of this Georgia squad, a 2-2 start in an out-of-state invitational against opponents from the ACC and the Big 12 probably was about the best we could have expected. Last May, after the Diamond Dogs’ season ended in disappointment, I wrote:

If you’re the sort of person who prefers to look at the glass as half-full, there’s a lot to feel good about with respect to the 2009 season. The Diamond Dogs went 38-24, set a new school record with 109 home runs, and made the N.C.A.A. tournament field in an odd-numbered year for the first time in the David Perno era with a team that featured significant contributions from six freshman position players (Zach Cone, Chase Davidson, Levi Hyams, Colby May, Johnathan Taylor, and Peter Verdin) and three freshman pitchers (Chase Hawkins, Michael Palazzone, and Cecil Tanner), so the future certainly looks bright.

While I’m sure I’ll come around to that viewpoint by next February, for now, I am going to sit and stew for a while over the fact that a young team charged out of the gate with a 25-4 start and fizzled down the stretch to finish 13-20. I could have used youth as an excuse for a 13-20 start followed by a 25-4 finish, but how is a conscientious Georgia fan to justify the reality of the 2009 campaign as anything other than a collapse?

Oddly enough, I take a certain amount of solace in seeing a young Georgia club go 2-2 and being able to identify the miscues that cost the Red and Black in the losses. Last year’s squad won straight out of the gate because it was too young to know it couldn’t win, then, about halfway through the spring, the Bulldogs skidded off the edge of the counter like Tom chasing Jerry, hung in mid-air momentarily, feet still pumping furiously, and dropped like a stone once the realization of the reality hit home.

This year’s team doesn’t have that problem; they’re performing just about as they should, which gives me hope that they’ll figure out what they’re doing wrong and get it fixed in time for it to matter. I’m willing to use youth as an excuse if the Classic City Canines leap out to a sluggish start and put together a blazing finish. I’d say 2-2 is a good way of beginning with such an objective in mind.