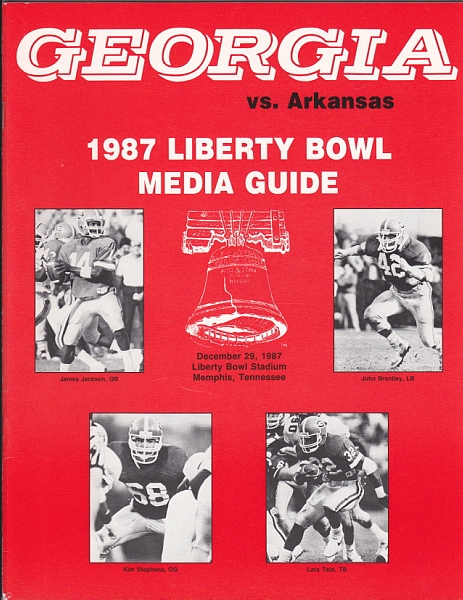 The Georgia Bulldogs’ New Year’s Eve date with the Central Florida Knights does not represent the Red and Black’s first rodeo, and, more to the point, it represents the Classic City Canines’ third Liberty Bowl. It has been 23 years since the Bulldogs made their second postseason appearance in Memphis, in which they redeemed their loss there 20 years before. (I apologize to Bubba ‘n’ Earl, of whose look at Georgia’s Liberty Bowl history I was unaware before starting my own series of postings upon the same subject.)

In Vince Dooley’s penultimate season on the Sanford Stadium sideline, the Bulldogs earned a Liberty Bowl berth with an 8-3 regular season that included wins over Florida and Georgia Tech. Memphis would be the site of Georgia’s third postseason meeting with the Arkansas Razorbacks, to whom the Red and Black had fallen in the 1969 Sugar Bowl and the 1976 Cotton Bowl.

The Hogs held a 3-0 lead at the end of the opening period, but the ‘Dawgs went out in front with a Lars Tate touchdown run in the first minute of the second quarter. Arkansas answered with a pair of Greg Thomas scoring scampers. A ten-yard jaunt into the end zone in the closing minute of the first half put the Razorbacks up 10-7 at intermission, then the Southwest Conference squad took the opening kickoff of the third quarter and mounted the drive that put the Hogs up by double digits.

Three seconds after the start of the fourth quarter, freshman John Kasay booted a 24-yard field goal, and James Jackson tied the game four and a half minutes later. The Razorbacks had a chance to reclaim the lead with a 35-yard field goal inside the final two minutes, but a missed three-point attempt kept the score knotted.

The Bulldogs, who had gone 0-1-2 in their previous three postseason appearances, appeared to be looking at a third tie in the span of four bowl games, which would have been a somewhat fitting ending for such an even game. After 60 minutes of play, Georgia held narrow edges over Arkansas in first downs (20-19) and in total yards (350-344). Each team launched three punts, each quarterback threw two interceptions, and the penalties were five yards and one flag from being exactly even.

The other statistical similarity---17 points apiece---appeared likely to hold up, as well, until Carver Russaw picked off an errant Thomas aerial with 46 seconds remaining in the game. The Bulldog cornerback returned the interception to the Hogs’ 43 yard line, and the Red and Black offense used three plays to move into position. Jackson’s 16-yard completion to Troy Sadowski put Georgia in field goal range, allowing Kasay to split the uprights from 39 yards away with no time left on the clock to give the Bulldogs a 20-17 victory. The win marked the Athenians’ first over the Razorbacks and first in the Liberty Bowl.

Coming soon: Too Much Information.