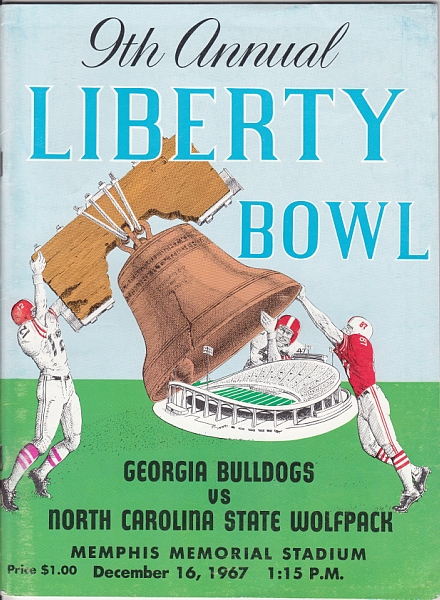 The Georgia Bulldogs’ New Year’s Eve date with the Central Florida Knights does not represent the Red and Black’s first rodeo, and, more to the point, it represents the Classic City Canines’ third Liberty Bowl. It has been 43 years since the Bulldogs made their first postseason appearance in Memphis.

Vince Dooley’s fourth Georgia club began the year as the defending SEC champion and the AP preseason No. 6 team, but back-to-back one-point losses to the Houston Cougars and the Florida Gators in early November stranded the ‘Dawgs at 7-3 for the regular season. The Red and Black drew as their Liberty Bowl opponent an N.C. State Wolfpack team led by its famous "white shoes" defense.

Before a then-record crowd of 35,045 fans, ACC player of the year Jim Donnan led the club he quarterbacked to a seven-point victory over the team he would later coach. Neither contestant cashed in during the opening quarter, but Donnan led the Wolfpack on a 65-yard scoring drive in the second period. A 15-yard penalty aided the North Carolina State march, which ended with a six-yard touchdown pass from Donnan to all-conference end Harry Martell. Martell would finish the day with seven catches for 69 yards.

A 42-yard kickoff return by Kent Lawrence and four completed passes thrown by Kirby Moore set up a one-yard scoring plunge by Ronnie Jenkins to knot the score at seven-all at the break. The halftime tie was indicative of the closeness of the contest: Georgia and N.C. State each earned 14 first downs on the day, the Wolfpack punted seven times to the Bulldogs’ six, and Donnan’s 24 attempts for 121 yards narrowly trailed Moore’s 22 aerials for 124 yards.

Following a scoreless third quarter, the North Carolinians went out in front early in the final period by capping off a 73-yard drive with a one-yard run by halfback Tony Barchuk that culminated in the end zone. Again the Athenians answered, putting together a 98-yard drive that was stopped just short of the goal line. The Bulldogs scrimmaged from the Wolfpack three yard line, and Lawrence took Moore’s pitchout inside the one, failing to score by mere inches.

The game ended in a 14-7 N.C. State victory that would leave Georgia with an all-time 0-1 record in the Liberty Bowl for the next 20 years.