Belue to Scott!: The Dawg Sports Book Review of Robbie Burns's Recounting of the Play That Won the Georgia Bulldogs the 1980 National Championship

Share All sharing options for: Belue to Scott!: The Dawg Sports Book Review of Robbie Burns's Recounting of the Play That Won the Georgia Bulldogs the 1980 National Championship 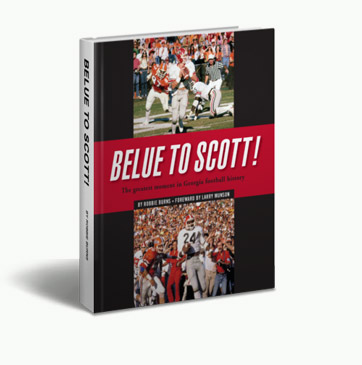 Shortly before the 2010 edition of the World’s Largest Outdoor Cocktail Party, I had the opportunity to interview Robbie Burns, the author of Belue to Scott!: The Greatest Moment in Georgia Football History (H&H Publishing Company, 2010). I since have had the opportunity to get my hands on a copy, which has given rise to this latest book review of a tome Bulldog fans will find of interest.

Released in time to coincide with the 30th anniversary of the iconic instant in the storied history of the Georgia Bulldogs, Belue to Scott! tells the story of the play, the game, and the season in a way that offers a wealth of new insights into a moment we thought we knew so well.

Filled with photographs, newspaper clippings, and statistics, Belue to Scott! crams a wealth of information on the Cocktail Party contest, the 1980 campaign, and the Georgia-Florida series into a 128-page treasure trove, but the book is no mere compilation of data culled from other research sources. The beauty of the book is to be found in the fact that Burns interviewed players, coaches, officials, and fans in an effort to explore the story in minute detail from every perspective.

Loyalists on both sides of the rivalry recounted their memories and spoke from the heart, sometimes for the first time in three decades, and Burns has woven together the disparate strands of their individual stories into a tapestry that tells the tale of that emblematic event in a way in which it has never before been described.

It is scarcely conceivable that a trivia question could be posed concerning Buck Belue’s famous pass to Lindsay Scott that Robbie Burns’s book does not answer. Coming into the contest in Jacksonville, which Cocktail Party combatant had amassed more first downs over the course of the autumn? The Florida Gators, who had moved the chains 129 times to the Bulldogs’ 128. Which stellar freshman, Georgia’s Herschel Walker or Florida’s Wayne Peace, had the better first half in the Gator Bowl? Walker, whose 149 rushing yards and a touchdown narrowly beat out Peace’s 144 passing yards and a touchdown. What was the precise play called that produced Scott’s immortal score? If you don’t know, get the book and find out for yourself.

The manner in which we experience certain critical events becomes definitive when viewed through the lens of memory; contemporary descriptions become entrenched, and the ability to examine events from a fresh perspective escapes us. So it is with Belue’s pass to Scott, which Cale Conley did not even attempt to render in his own words in War Between the States, as he wisely opted to recount the play with the words of Larry Munson that frame the moment in our minds.

Robbie Burns has retold the oft-repeated story in a new and compelling way, blending the voices of the various characters who were present when the drama unfolded in a gripping rendition that breathes fresh life into an historic event that is even more exciting in retrospect when appreciated from the vantage point of a fully informed understanding.

No matter how well you think you know the story, you will be surprised by Belue to Scott! No matter how familiar you believe these events to be, you will be thrilled by Robbie Burns’s account. No matter how loyal a Bulldog fan you are, your library is incomplete without this book.