Share All sharing options for: Cocktail Thursday: I'm Fairly Certain We Won't Lose This One Edition.

If it's Thursday and you're reasonably sure that your Georgia Bulldogs won't find a way to lose to "off week", then you should celebrate with a drink. Allow me to help.

Of course I could come up with an off week themed libation, but that seems a bit odd to me. I mean, the point of an open date is to not have to gear up for your team's game. How would we go about encapsulating such gridiron sloth? A slo gin fizz? Not likely.

So this Thursday we're engaging in a little audience participation. Here's the question for the day, Dawg Sports legions: What would SEC coaches drink at the pregame tailgate, assuming they were able to simply cut loose and unwind? My partial list is below, and I eagerly await yours in the comments:

Mark Richt. Virgin Cuba Libre, thank you very much. Diet if you've got it. 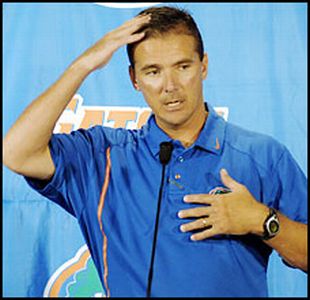 Do you believe there's any chance on God's green growing Earth that a guy this robotic and cliched drinks anything other than the most robotic and cliched of watered-down beers? And while I've been known to drink one or two during a tailgate (maybe even with a Chik-Fil-A biscuit for breakfast don't you dare judge me . . .) Urbz is the only guy in America who really and truly cares about the "less filling" portion of that famous equation. You just know that he enjoys kicking back with the same beer he's been drinking since he was in college and listening to an awesome Sister Hazel cover band.*

Les Miles. Absinthe. Out of a ram's horn. Likely while hanging naked from the rafters. Or warm Tab, it really just depends on his mood, ya know?

Steve Spurrier. Spurrier's a country clubber, so I'm betting he wouldn't turn down a Tom Collins or a gimlet if you offered. Probably doesn't drink martinis though, because he's refined, but not "refined", if you catch his drift.

Robbie Caldwell. Miller High Life. You just know Vandy's coach downs  the champagne of beers with either raw oysters or boiled peanuts, depending on the season and locale. I'm pretty sure that if you could get Caldwell, Mike Leach, Howard Schnellenberger and Houston Nutt together and miked up around a table at Floribama, you could charge admission to college football bloggers and make a mint. The pay-per-view revenue would be pretty decent, too.

Nick Saban. Coffee. Black. Intravenous. Now!!! If I wanted to stand around chatting I'd coach hackie sack at Starbucks!!! [jogs back to film room].

Gene Chizik. Sizzurp. It's the only logical explanation. Jawbone Gene is clearly high like a G6 and watching Malzahn's offense in slow motion and/or technicolor.

Bobby Petrino. Will drink anything if the price is right.

Derek Dooley. I'm betting Dooley the Younger enjoys a good Russian River pinot. Wahoo alumni don't drink wine from a box or beer from a can in my experience.

Again, your suggestions are welcome below. Until tonight's exciting Alabama/Georgia State Curry Bowl . . .

*Gator Nation, this is your semi-annual reminder that your school's music scene sucks. Seriously, we'll spot you Tom Petty. But other than that you're just not getting it done. Heck, our bloggers hang around with better musicians than your local hipsters.