Georgia Bulldogs and Auburn Tigers Meet at the Intersection of Tradition and Technology: A Brief History of the Deep South's Oldest College Football Rivalry

Share All sharing options for: Georgia Bulldogs and Auburn Tigers Meet at the Intersection of Tradition and Technology: A Brief History of the Deep South's Oldest College Football Rivalry

(Author’s Note: The impact of technology upon sports fandom is self-evident; the mere fact that you currently are using tools that essentially did not exist 20 years ago to participate in a medium that essentially did not exist ten years ago is proof enough of that. This is the third and final installment in a series of postings sponsored by Samsung Enhanced Content at various SB Nation weblogs addressing the transformative influence of technology upon the ways in which we enjoy competitive athletics. The previous installments are available here and here; MaconDawg and I sincerely hope that those postings, and this one, cast us in at least a somewhat more favorable light than Krusty the Clown when he was shilling for Canyonero.)

The above photograph depicts the 1895 Auburn football team, which defeated Georgia in Atlanta by a 16-6 margin in the third series meeting in the Deep South’s Oldest Rivalry. For that Thanksgiving Day affray at Piedmont Park, the fans were regaled not by piped-in rock music blaring from a huge electronic scoreboard, but by John Philip Sousa’s band, which played on the exposition grounds graded for Buffalo Bill’s Wild West Show as part of the World’s Fair exhibition. Though the game took place under conditions that would seem to us today primitive, the rivalry was as hard-fought and closely-contested in the 19th century as in the 21st; through 1907, the Georgia-Auburn series would be snarled 6-6-2.

I came across the foregoing portrait when searching through old photographs in the Clemson University special collections library while working on the research for Fighting Like Cats and Dogs. That picture was taken in an era long before weblogs and cellular telephones; in that day, all photography was posed, and teams and boosters traveled to football games by way of trains like the one appearing prominently in the background. Trains were even used to carry the livestock serving as the teams’ unofficial mascots.

The fellow in the suit at the end of the back row on the left is Walter Riggs, who was responsible for founding the Clemson Tigers’ football program. When that picture was taken in 1895, however, Riggs was an Auburn graduate football manager (in which capacity he once was called upon to hire a new head coach for the team; he awarded the job to John Heisman). A first honor graduate who received a baccalaureate degree in electrical and mechanical engineering from the Agricultural and Mechanical College of Alabama in the class of 1892, Riggs was an athlete, as well. He played catcher on the baseball team and left end on the football squad.

Herty and Petrie each became acquainted with the game of football at Johns Hopkins. Both men received their Ph.D.s from the Maryland institution in 1890, with Herty taking his degree in inorganic chemistry and Petrie receiving his doctorate in history, political economy, and jurisprudence. Herty returned to Athens, where he served as a professor at his alma mater.

When Herty arrived at Georgia in 1891, no intercollegiate gridiron clash had yet taken place south of Raleigh, N.C. In order to rectify that state of affairs, Herty met with several undergraduates in the barren area behind New College to teach them the game. Together, they cleared the rocks from the field, began each morning with a three-mile jog before breakfast and an ice-cold shower afterward, then continued each afternoon with instructions in the rules of the game from Herty’s copy of Walter Camp's rule book.

By the fall of 1891, the nascent Georgia squad had everything necessary to begin intercollegiate competition except an opponent. Macon-based Mercer College agreed to provide a team for the Athenians to confront, but it took until after Christmas for the club to be organized, so the first college football game to be played in the Deep South took place on the afternoon of January 30, 1892, on the plot of earth that would come to be known as Herty Field.

Meanwhile, Charles Herty’s Johns Hopkins classmate, George Petrie, had left Baltimore for the Loveliest Village, where he joined the faculty of the college that soon would be rechristened the Alabama Polytechnic Institute. Petrie, like Herty, introduced the game of football to the Southern school at which he taught. The historian organized the first football team at Auburn, and, owing to his undergraduate experience in Charlottesville, he selected Virginia's burnt orange and navy blue to be the official athletic colors for the Plainsmen, as well.

The longstanding friendship between Herty and Petrie led them to arrange a game between Georgia and Auburn at Atlanta's Piedmont Park. Both professors coached their respective schools' inaugural teams. The February 20 clash---won by the Alabamians, 10-0---inaugurated the region's oldest gridiron rivalry, which remains an annual affray to the present day. 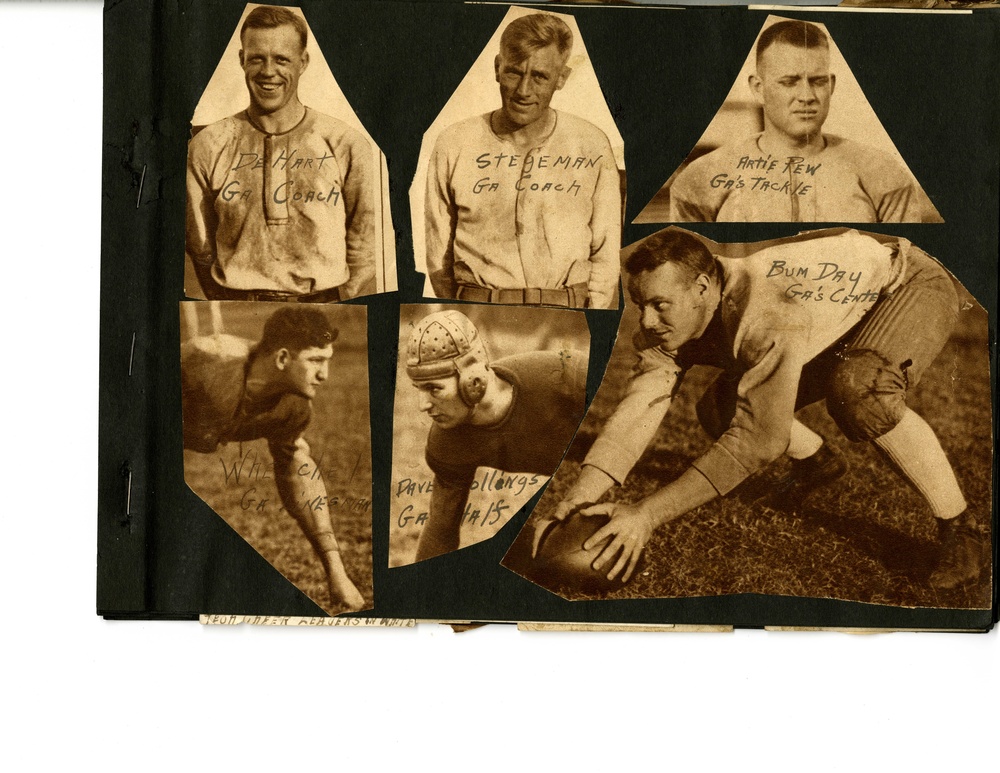 The above images are from the Georgia football program of the early 1920s. By that time, the horse-drawn carriages supporters had ridden to early college football games had given way to the Ford Model T, which had been on the market for more than a decade. In 1920, the year Herman Stegeman guided the Georgia squad (now known as the Bulldogs for the first time) to an undefeated season and a Southern Intercollegiate Athletic Association championship, the Red and Black snapped a three-game losing streak to the Tigers by beating Auburn at Columbus in the 25th meeting between the two teams.

That was 90 years ago. Tomorrow, I will sit down in front of a plasma-screen television and watch a game being played at Jordan-Hare Stadium in high definition. Such breakthroughs were inconceivable on the day I attended my first Georgia-Auburn game, yet more advancements are coming our way every day, which will further integrate the myriad of ways in which we enjoy intercollegiate athletics, so thoroughly enhancing our experience that our appreciation of sports is utterly transformed.

In the midst of this technological revolution, the ancient and storied rivalry between the Bulldogs and the Plainsmen remains what it was in Charles Herty’s and George Petrie’s day. Sweeping changes have enabled, and will continue to enable, us to participate in this historic feud between annual combatants, but, come what may, I will still hate Auburn.