There won't be any poo-pooing of any aspect of the game today. Though flaws may have existed... and may have even been obvious at times (like during wide open long ball plays... hypothetically, of course)... a win is still a win at this point. Even if its over the crappiest Tennessee team since, well, any of the last 5 years or so really -- and we didn't even win most of those.

One note about Todd Grantham and his defense: When it was announced that we would be installing the 3-4 at UGA and folks looked at the personnel we had, the most frequently made comment that was made was that we would be bringing the pressure and that would occasionally lead to us getting burned. That was a pretty apt description of what we saw today. If we're still having these issues when Grantham is in Year 2/3, we can talk... but given the fact that most Georgia fans said as much before the season, I'm not sure I get the impatience with that aspect of the game. Plus, it's fun watching guys get blown up in the backfield. 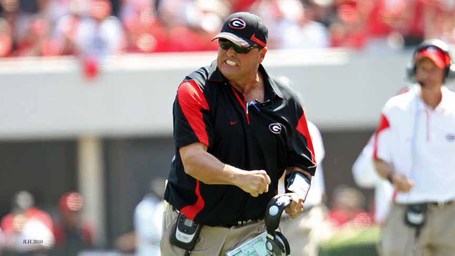 "I will wear whatever freaking color I want and you will like it. In fact, you'll like it so much that you'll get your soft, shoulder tackling tails out there and kill somebody!"

So yeah, it would be easy to say its just Tennessee. But our defense gave up fewer points to them than Florida and the same number of points as LSU. So there's that.

At the current rate, Grantham's defense will have given up the same number of points as Willie Martinez's 2009 defense during the 3rd Quarter of the 3rd game of the 2011 Season (I'm still assuming we won't make a bowl game)