Tonight, I present reasons number 15-11 for why I hate the Florida Gators, and you should, too.

We joke that Florida fans think their football program started in 1990, because that was the year they hired Steve Spurrier, and the following year they won their first SEC title, which was their first conference title of any kind.  Trying to compare the pre-1990 Gators to the pre-2010 South Carolina Gamecocks, however, is not an altogether valid comparison.

You see, if they weren't dirty cheaters, 1991 would not have been Florida's first SEC championship.  In 1984, the Sunshine State Saurians finished with a conference record of 5-0-1, and claimed their first SEC championship.  During the offseason, however, the NCAA realized that Charley Pell felt that certain major portions of the NCAA rulebook were optional, and Florida was forced to vacate their 1984 SEC Championship.  The Gators went on to compile the best record in the SEC in 1985 and 1990 as well... but, well, they just couldn't seem to shake off those old cheatin' ways, and therefore were declared ineligible for the titles during those seasons, as well.

And for the third day in a row, I will remind you about Urban Meyer's enchantment with "a certain morally casual attitude."  Then there's this:

(I truly apologize for subjecting you to another viewing of the Grambling uniforms.  Those responsible for this video's inclusion have been sacked.)

Do we need any more evidence to support the notion that we must hate the Gators because they are dirty, rotten cheaters? No?  Moving along, then...

Excuse me for a moment. 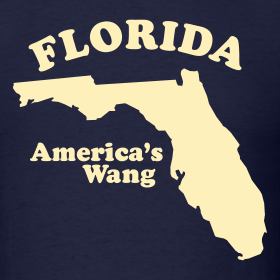 Yes, this is a 10-year-old election joke.  I don't care if it's already played out, because it's low-hanging fruit. LOW HANGING FRUIT!  You can hate the state of Florida either because:

a) They voted Al Gore for President, but couldn't "Shit Tyrone Get it Together" enough to count the votes correctly.  OR

b) They voted G.W. Bush for President, and couldn't count well enough to avoid generating a huge new branch of conspiracy theorists that claim that the Republicans orchestrated 9/11.

See, it generates enough hate for all! I just love it when a plan comes together.

Gator Hater Reason #12: The entire state of Florida is just three types of people: Old yankees, tourists, and those trying to extract money from the previous two.

Florida is where people from Michigan, Ohio, New York, Pennsylvania, and other Union cold states go when they've gotten too old to function in the snow any longer.  They do have to have means to support themselves in this new tropical old-people's paradise, though.  And where there's money, there are always lots of people looking for ways to get at that money.

Likewise, Disney, Universal Studios, Sea World, Busch Gardens, and many other smaller recreational destinations pull in millions of tourists a year with wads of cash burning a hole in their pockets.  (Not to mention the tourism at beaches... but it's hard to have cash burning a hole in your pocket when you're wearing a swimsuit with no pockets.) 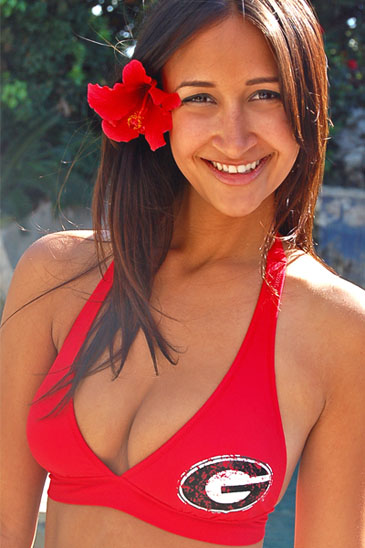 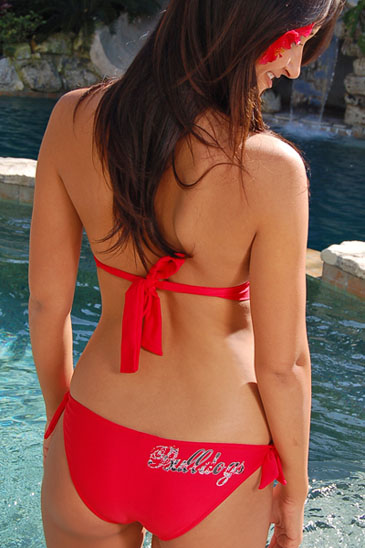 I mean, I know where you could put some cash in that swimsuit... but it wouldn't exactly be hiding.

In fact, the predatory nature of many of these gold-digging residents of the Sunshine State could help explain why their fans and administrators seem to have such a casual attitude towards discipline and, you know, ethics. That's my story, at least, and I'm sticking to it.

For having such a morally ambiguous social compass surrounding them, we could pity the Gators... but not me.

This may seem awfully fatalistic to some, but hey, we've won 3 out of the last 20 meeting here... we're entitled to a little gallows humor. Understand where I'm coming from, as well.  My first Georgia/Florida game was in 1993.  That was the year that Eric Zeier threw a touchdown pass on the last play of the game to win, only to find out that Florida had called a timeout mere milliseconds before the ball was snapped.  On the ensuing play (the actual last play of the game), Zeier's pass fell harmlessly to the Gator Bowl turf, and Florida celebrated their 3rd straight victory over the Georgia Bulldogs.

The weather that day roughly approximated India during monsoon season, as well.  I had come completely unprepared, with no poncho and no umbrella.  (Umbrellas were forbidden at the Gator Bowl, anyway.)  As I recall, the temperature was somewhere in the low 70's, and it rained... hard... the entire game. I have never been more soaked through to the bone my entire life than I was that day.  And for one brief moment at the end of the game, none of it mattered.  Then, the Gators found a way to win, and I realized just how cold and wet I was, and that I didn't like it.

For putting me through that misery only to yank victory from the jaws of defeat, I hate the Florida Gators.  For forcing me to endure 11 additional losses in Jacksonville since that day, I hate the Florida Gators.  And, most of all, for forcing me to watch helplessly as Steve Spurrier threw a long bomb at the end of the game just so he could score 50 points on Georgia for the first time in Sanford Stadium...

Tomorrow... we break into the top ten!  (Only time you'll hear that again in relation to either the Dawgs or the Gators this season.)