Quite a bipolar game from a defensive standpoint, no?

On the one hand, you have a D that seems to run screaming at the notion of 3rd and long. You have a D that gave up just as many or more points in each quarter as in the one before it. You have a secondary that, as noted in the game thread, obviously hates both me and this feature.

On the other, you have a defense responsible for 3 turnovers and responsible for recovering another. Without them (and the best game of Washaun Ealey's career), we probably wouldn't have won this game.

To be honest, I think they did exactly what many thought they would. They looked ahead to Florida. They just waited until the 2nd half (when they thought the game was already over) to do it. While I loved the way they played in the1st half, I don't love the fact that they seemed to let their foot off the gas as the game went on. And frustrating as that is, up 18 at the half, I can see how a young man might start thinking about a game against a hated rival.

If I had to define the defensive performance, I'd say they came up big when it counted and didn't come up at all when it didn't. I guess I can live with that... for this week. 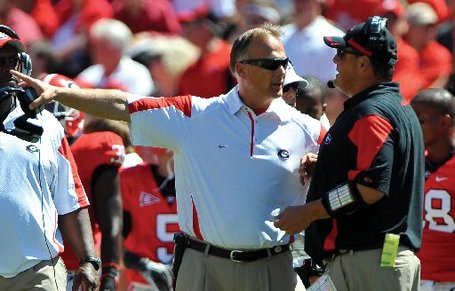 "We're home team in Jacksonville? That means Daddy's wearing black... and we all know what happens when Daddy wears black."

At the current rate, Grantham's defense will have given up the same number of points as Willie Martinez's 2009 defense during the 1st Quarter of the 4th game of the 2011 Season (I'm still not comfortable with the notion that we'll make a bowl game.

P.S. The TGPAC will be late next week since I will either be drunkenly gallivanting through the streets of Jacksonville or drowning my sorrows under a bridge in city of same name. Until then....