If I'd known how this was going to change things, I'd have started putting people on notice in week 2.  Of the 8 people/things I put on notice last week, 5 of them got resolved positively last week.  (Well, I probably should only say 4 things got resolved positively, since Carlton Thomas did not run up the middle once last week, but that's because he got hurt.  Carlton, I don't know what to say... I'm sorry, man.  I had no idea this was going to happen.  You're officially off the board for the rest of the season. Get well soon.)

It appears that the college football gods have ADD, though, because they seemed to have started at the bottom of my list and worked their way up, got bored, and then started back at the top (in a bad mood), but then got distracted again.  In doing so, the middle part of my list got wholly neglected.  (This completely jives with my understanding of the college football gods, by the way.)

Therefore, I would like to let the following people know:  You're on notice, dawg!

The week 6 board is as follows: 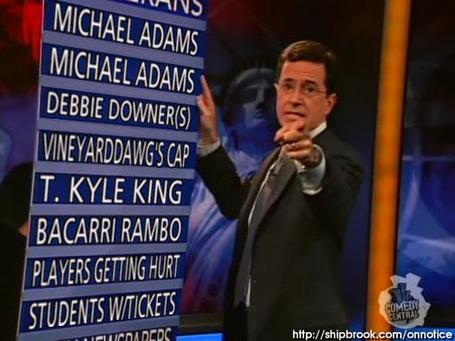 Since I have figured out how the gods work and all that, the two middle spots on the board are issues we can personally take care of, thereby leaving the issues at the top and bottom for a higher power to deal with. 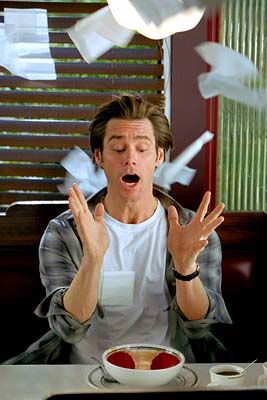 Dude... Mark Richt's hair part is not on notice this week.  Stop showing off and get to business.

1) Michael Adams - Why Michael Adams?  Because he's a jerk, has stolen money from and is a disaster for University, and everybody that has ever worked with him hates him. Plus, I have it from a very authoritative source inside the UGA administration that he wears Florida Gators underwear and an Auburn tank-top under all his suits. Any other questions?

3) Debbie Downer(s) - I fully admit that our team displayed some fairly significant issues.  Our secondary is still subject to giving up the big huge play. We still can't pound the ball on the ground. This is the weakest Tennessee team in recent memory.  Just for today, none of that matters.  And 20 years from now, when we look in the media guide, we'll see that we beat Tennessee 41-14.  Nobody (other than Kyle and Jeff Dantzler) will remember that it was the worst Vol squad of the 2010's. 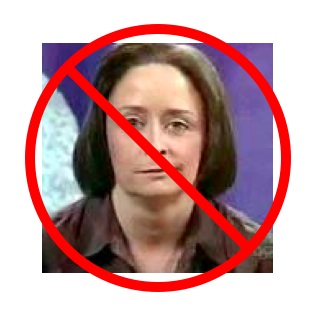 And by the way, some of the "weakness" argument actually works out in our favor.  Yes, Tennessee coughed the ball up 3 times.  We, however, took full advantage of those mistakes, scoring on every single subsequent drive for 17 total points from turnovers. And even though our defense looked, at times, like one of those sieves with the really big holes, they did still manage to come up big and deny UT any points on a 1st and goal from the 8.

So, there were good and bad points from yesterday's game.  But, hey, we just  beat Tennessee by 27 points.  Give us a day or two to be happy.

4) Vineyarddawg's cap - My basic gameday uniform has not changed (except for blackouts) for at least 10 years.  I wear a red polo shirt with a "G" logo over my left breast, khaki shorts (when it's warm) or jeans (when it's not), and a red cap with a "G" logo on it.  Through a confluence of circumstances, however, I accidentally left my "G" cap at home yesterday.  Georgia then broke a 4-game losing streak and beat Tennessee by 27.  Since I don't want to mess with the mojo during a winning streak, my cap will remain on its peg in my closet for as long as this winning streak continues.

5) T. Kyle King - As Kyle previously mentioned, he, some other Dawgsports regulars, and I met up with the EDSBS crew before the game.  (Spencer Hall, by the way, is just as odd as you'd think he'd be. But totally in a good way.) After the FYG remark and the pregame commiserating, Georgia broke a 4-game losing streak and beat Tennessee by 27.  Since I don't want to mess with the mojo during a winning streak, I agree with Kyle that he must hear the FYG remark prior to every home game, and I think that we should commiserate before the game, as well, for as long as the winning streak lasts.  (In person or over the phone... your choice, Kyle. Since you were about 20 yards from where I tailgate, though, I'm willing to make the trek to north campus next week.)

6) Bacarri Rambo - On principle, I don't normally like to call players out after a huge, gratifying win... but I had to make an exception in this case.  Rambo... what's the deal man?

Are you just waiting to spring  your trap or something?

Rambo had a very promising few outings during his freshman year.  So far this year, though, he's looked like a virtual clone of Bryan Evans. About 75% of the time that somebody is getting beat deep, that "somebody" is this body. Perhaps he's been having a few too many Bacardi Rambos during the game and his attention has been wavering.  Whatever it is, though... this needs to get fixed quickly.

7) Players getting hurt - Once again, the Bulldogs suffered a painful blow this week, losing Carlton Thomas to a strained hamstring.  Hamstring injuries are like groin injuries; there's no such thing as a "minor" one, and when you get one, it doesn't go away quickly.  His loss was more than balanced out by getting a fully-healthy Caleb King back, but it still decreases both our depth at running back and the game experience of the squad as a whole.

We also lost Cornelius Washington to the nebulous "concussion" injury, which means he's out indefinitely until cleared by the medical staff, further thinning out our linebacker corps.

Get well soon, guys. This "good players getting hurt" nonsense has got to stop.

8) Students w/Tickets - Once again this week, when the game started, a wide shot of the stadium showed an upper deck student section that looked 90% empty, and from my seats in the east endzone, I saw a west endzone student section that was 50% empty.  When the cameras panned up around the middle of the 2nd quarter, it looked like the upper deck had filled in pretty well, but the west endzone seats never got more than 80% full.

My parents travel over 200 miles to every home game, and are always in their seats about an hour before kickoff.  Many of you live less than half a mile away from the stadium... and you can't make it in before the end of the first quarter?

Come on, students, you need to step up your game!  Your fellow students finally gave you a big win against a big rival. You need to reward them by being standing in your seats and cheering your head off when they run on the field Saturday!

I'm looking forward to seeing how we handle success against Vanderbilt.  I'm also looking forward to meeting the new Uga.  Hopefully, in 6 days' time, we'll once again be able to say, "There ain't nothing like being a Bulldog on Saturday night after a Georgia victory!"