I have submitted the first draft of my BlogPoll ballot (on which your feedback is appreciated), so now it is time to cast my weekly SEC Power Poll ballot. Here, in my estimation, is how the twelve teams of the Southeastern Conference stack up in comparison to one another:

1. Alabama Crimson Tide (4-0): Nick Saban’s club looks like the most complete team in the league. ‘Bama has looked solid in every outing and it’s tough to pick out a game remaining on the schedule in which the Tide shouldn’t be favored by a respectable margin. Alabama isn’t flashy and is as unhyped as one of the sport’s historic powers can be, but, right now, they’re the SEC squad you’d least like to see your team face next Saturday.

2. Florida Gators (4-0): Obviously, their struggles against the Big Orange at home and the question mark the Sunshine State Saurians face at quarterback in the wake of Tim Tebow’s concussion are not sufficient justification for ranking the Orange and Blue second in the SEC. Clearly, the only plausible explanation can be my blind virulent hatred of Urban Meyer and my incessant insinuations that everything Coach Meyer says is a lie. Yeah, that must be it.

3. LSU Tigers (4-0): This is easily the shakiest pick for the third-best team in the conference since, well, I picked Ole Miss last week. Hopefully, it will end equally badly for the SEC West team in question when it travels to take on an SEC East squad on the road.

4. Auburn Tigers (4-0): I’m not any happier about this vote than you are, but they walloped a Mississippi State club that looked pretty good against Louisiana State and they beat West Virginia, so the Plainsmen didn’t just get to 4-0 by playing patsies. The Alabama Polytechnic Institute earned this spot, at least for this week. I hate Auburn.

(Disclaimer: The foregoing statement was intended as an expression of institutional rivalry rather than as a statement of personal dislike. This has been a public service announcement.)

5. Georgia Bulldogs (3-1): Unless and until the ‘Dawgs quit turning it over three times a week and letting the opposition stay in games the Red and Black otherwise would be winning handily, the Classic City Canines are living on borrowed time while they work their way through the mediocre part of the schedule.

6. South Carolina Gamecocks (3-1): Yes, it was a signature win, but, in the end, the Palmetto State Poultry were ahead by more than a field goal but less than a touchdown in a night game at home in which the Gamecocks had held the lead since right around halftime, Ole Miss got back into it after losing an early lead then picked up a first down well inside South Carolina territory in the closing minutes, and it came down to an incomplete pass on fourth down. Does that mean the Rebels registered a last-second loss? ‘Cause it looked more to me like the winning team won.

7. Mississippi Rebels (2-1): We all knew we were overrating the Rebs, but we all did it anyway. The fact that Ole Miss is the best team in the bottom half of the league ought to cause us all to reassess our claims that the Southeastern Conference is the toughest in the land. We may be the league that stinks the least from top to bottom, but that isn’t the same thing. 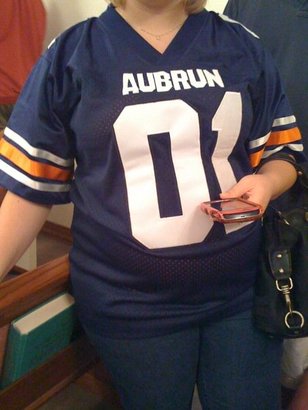 Maybe it isn’t so much that I hate Auburn as it is that I love knowing how to spell. (Image courtesy Roll Bama Roll.)

9. Mississippi St. Bulldogs (2-2): This may be the finest 2-2 team in the country. Given what he has done with what he had at his disposal upon his arrival, Dan Mullen may have been the best head coaching hire in the league this year.

11. Arkansas Razorbacks (1-2): Congratulations on making Georgia’s win over the Hogs appear absolutely meaningless . . . and on ticking me off with your animadversions against our mascot. I think a lot more highly of Uga than I do of most people I’ve ever met, by the way.