Why I Hate the Heisman Trophy

Share All sharing options for: Why I Hate the Heisman Trophy

Dr. Saturday has pointed out how this year’s Heisman Trophy race is apt to be more insipid even than usual, which is saying something. However, I didn’t need to know that to know better than to follow this year’s race for the stiffarm statue.

For one thing, I hate the namesake of the award. John W. Heisman was the Steve Spurrier of his era, running up scores and chiding opponents with smart-aleck remarks. Coach Heisman was responsible for the most lopsided game in NCAA history (222-0 over Cumberland College), in which he told his players that "there’s no telling what they have up their sleeves" at halftime, when his team held a 126-0 lead. After a win over the Red and Black, Coach Heisman sniffed, "Georgia should vary their attack and use more formations." 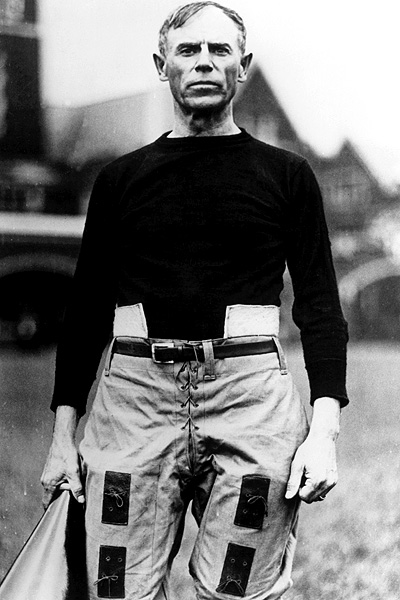 Heisman can bite me.

Bear in mind, as well, that John Heisman coached five years at Auburn, four years at Clemson, and 16 years at Georgia Tech. In that quarter-century, his teams went 13-5-2 against Georgia. The guy guided the programs at three of the Bulldogs’ four or five biggest rivals and made them successful against the Red and Black. Why should I care about an award named in his honor? Would I follow the race for an honor called the Spurrier Trophy?

Beyond that, I can’t stand the way they go about giving out the award. If you had a choice between fielding a team comprised of Heisman Trophy winners in their prime or Heisman Trophy runners-up in their prime, you’d take the second-place finishers in a heartbeat. We hear endless griping about the BCS, yet the BCS national championship game gets it right a great deal more often than the Heisman Trophy voters.

The award virtually always ignores players who take the field on the side of the ball that wins championships, which alone ought to render the Heisman Trophy a comical exercise in utter ludicrousness. The criteria change from one year to the next, as evidenced by the following table. Spot the Heisman Trophy winner:

There is a very good case to be made for the proposition that the first guy (Michigan’s Charles Woodson in 1997) was the best player in the country, but, if that argument is valid, there is no legitimate basis for claiming that the second guy (Georgia’s Champ Bailey in 1998) deserved to finish seventh.

But wait! There’s more! As if daring college football fans to ratchet up their capacity to countenance complete silliness, the Heisman Trophy presentation still occurs before the bowl games are played, despite the fact that postseason statistics now count towards season totals and national championships are determined in January tilts in Miami, New Orleans, and Pasadena.

Let’s not mince words. The Heisman Trophy continues to be held up as somehow relevant for no other or better reason than that it provides a ready-made event available for ESPN to televise and use as a platform for pimping its college football bowl coverage during the lull between the conference championship games and the first of the postseason affrays.

That’s fine for the Worldwide Leader in Sports, but why should the rest of us care? It’s a Hollywood happening, hyped out of all realistic proportion and designed to be covered solely for its supposed star power. ESPN could have Joan Rivers interviewing the tuxedo-clad finalists on the red carpet before the ceremony and it wouldn’t seem out of place.

The Heisman Trophy is purely the province of publicists devoted to their own agendas rather than to any conscientious effort at objectivity in their efforts allegedly to recognize the most outstanding player in college football . . . which is why that effort so frequently fails in its stated objective.

The Heisman Trophy race is a carefully orchestrated media blitz by several high-profile sports information offices, which is somewhat akin to hiring James Carville to run your daughter’s campaign for secretary of her high school junior class. Actually, come to think of it, that comparison is unfair; high school junior class officers are in charge of planning the prom, which is a good deal more important than which quarterback or running back brings home an overrated and ugly award that signifies little more than a heightened likelihood that he will underperform in his bowl game.

It should not surprise us that the only two schools to have had seven different players win Heisman Trophies are Notre Dame and Southern California. It’s a weepy, sepia-toned, faux-sentimental event straight out of Universal Studios, so, naturally, it most frequently recognizes the Fighting Irish (the subject of football films from "Knute Rockne All-American" to "Rudy") and the Trojans (a movie-star program in the heart of Los Angeles).

It’s not a legitimate award. It hasn’t been for a long time, as Ed Marinaro would be the first to tell you. (If only the voters had known he would one day star in "Hill Street Blues," they might have given the Big M his due. . . .) If ESPN wants to trot out this glitzy dog-and-pony show every December and treat it like something weighty and profound, that’s fine. The rest of us, though, need to ignore this nonsense and focus on something less absurd.