2009 Georgia Bulldogs Opponent Preview: Who the Heck is Tennessee Tech?

Share All sharing options for: 2009 Georgia Bulldogs Opponent Preview: Who the Heck is Tennessee Tech?

If you’re like me, you look at the 2009 football schedule and the date that looms most ominously for you is November 7, when the Georgia Bulldogs will face both the Tennessee Volunteers and the Georgia Tech Yellow Jackets in a rare Sanford Stadium double-header.

Fortunately, I happen to know the answer to that question. I have a friend, Lindsey, who attended both the University of Georgia and Tennessee Technological University, and I asked her to prepare a brief write-up about her alma mater other than the one in Athens. 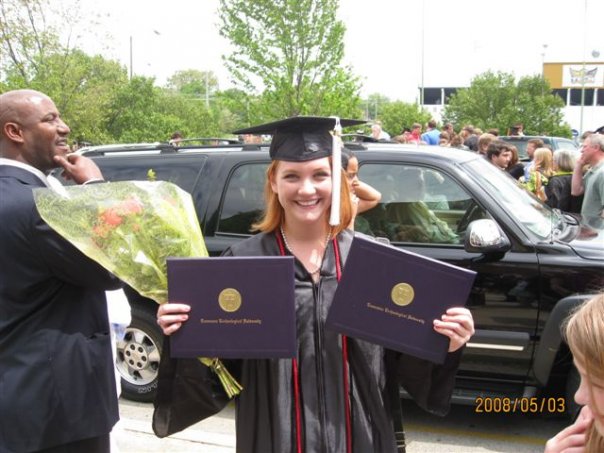 (Author’s Note: The above photograph of Lindsey is provided in order to illustrate that she is an alumna of Tennessee Tech and that she actually exists and is not a fictitious female like the girl at Niagara Falls made up by Anthony Michael Hall in "The Breakfast Club." Please don’t turn her into a collegiate Allison Stokke, film her through a peephole, or do anything else to give Jay Mariotti further evidence that the blogosphere is the province of pervs. We try to run a class operation here.)

Take it away, Lindsey:

TTU is located in Cookeville (pronounced "cook-vul"), pretty much right between Nashville, Knoxville, and Chattanooga. There’s not much around except speed traps, cows, rivers, and cows. Cookeville, therefore, has become the hub for the Upper Cumberland and boasts honestly-good cultural events, decent-sized companies, and, sometimes, stuff to do.

Our football players may not look intimidating in their beautiful purple and gold uniforms, but at least we have a reason for the gold; we’re known as the Golden Eagles, led by our fearless mascot, Awesome Eagle (obviously named during the 1980s). We’ve even got a statue of a golden eagle on top of the administrative building. The statue was stolen from a hotel (several times, actually) until the hotel owner eventually donated the statue to TTU. The governor of Tennessee later pardoned the students involved with the multiple thefts.

The student body at Tech is kind of diverse, too. There’s the typical college kid, to be sure, usually from the suburbs of Nashville or Knoxville. But then there are the farm kids, who show up to class in the tightest Wranglers I’ve ever seen, complete with cowboy boots that are even caked in authentic manure. There are also crunchy granola types who sit around the quad talking about leaves and balancing on slack-lines. They come for the hiking and kayaking (Cookeville is lousy with great outdoorsy things to do) and stay because TTU is actually a nice little university.

We may not have an arch or hedges or fancy literary societies, but we do have a few things. We have a dog buried on the quad; his name was Dammit and students still leave flowers for him. At some basketball games we throw toilet paper and call it a blizzard. And when we beat MTSU in football, we get a pole called the Shinny Ninny.

Unlike UGA, classes here are small. You can actually become great friends with your professor (or quick enemies) really fast; average class size is around 20 students. Also unlike UGA, football games are free for students to attend, prime tailgating spots are easy to come by, and attendance at games is sparse. The only game worth mentioning is the Homecoming Game, and that’s really for the parade. There’s a kazoo band.

To be fair, I haven’t been able to attend a game in the past 2 years, but I’m confident nothing much has changed. I can tell you, though, that when we got our new coach, Watson Brown, my grandmother was terribly excited. They went to TTU together and evidently he was quite the looker back then.

Well, there you have it, folks . . . Tennessee Tech in a nutshell, with a level of detail not seen since Loran Smith reported that Charles Grant loves boiled peanuts!

My thanks go out to Lindsey for providing us with the lowdown on the Golden Eagles. You may consider yourself fully briefed and ready for November 7.