Ten Things Auburn Fans Should Do Before They Die

Share All sharing options for: Ten Things Auburn Fans Should Do Before They Die

If ever a book title cried out for a snarky response, this is the one. 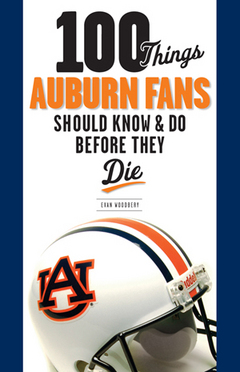 The Top Ten Things Auburn Fans Should Do Before They Die:

10. Buy the Plainsmen’s former head coach a new pair of pants to replace the ones he lost.

9. Proudly announce to three strangers that Auburn University is the institution at which the toothbrush was invented, and, if anyone doubts the veracity of that story, patiently explain that this fact is known because, had it been invented anyplace else, it’d have been called the teethbrush.

8. Try going 24 hours without thinking about the Crimson Tide. Yes, in a row.

7. Deal with the fact that Bo Jackson was the second-best SEC running back of the 1980s to wear the number 34.

6. Teach these guys how to spell the name of the college whose name appears on their sociology degrees:

5. Quit griping about 2004 and admit what a relief it was not to have to watch the Tigers get rolled by Southern California in the Orange Bowl.

2. Maybe cool it with all the cheating just a little bit.