Counting Down: The 25 Things I'm Looking Forward to Seeing This Fall in the SEC #25-21.

Share All sharing options for: Counting Down: The 25 Things I'm Looking Forward to Seeing This Fall in the SEC #25-21.

25. the Mississippi State offense. I don't think that Dan Mullen hasn't gotten enough credit for Urban Meyer's offense. He was with the guy at every stop from Bowling Green to Utah to Gainesville, and that's no coincidence. The Bizarro Bulldogs will struggle early as they grow into Mullen's spread attack. But once they get the right personel in the right spots, this offense could do good things. Also, remember, Sly Croom's problem was never defensive execution or talent. There's still plenty of that in Starkville. If MSU can get the offense to click, they could notch a surprise win or two. 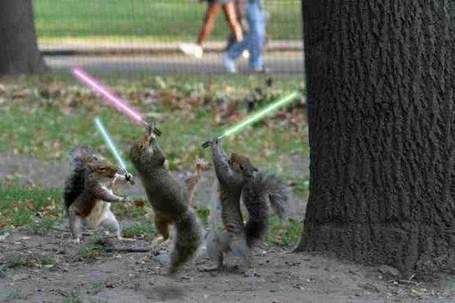 A handy visual representation of the 2009 Mississippi State offense. As in this picture, somebody is probably going to lose an appendage. But if they ever get the choreography down, it should be pretty spectacular.

24. Malzahn-palooza. It's like The Tony Franklin Experience, but with a slight chance of success. No one, from the Auburn fanbase up to and including  Tommy Tuberville, appears to have bought into Franklin's plan. Malzahn however has a new head coach and will likely get significantly more leash from an Auburn fanbase that isn't expecting the reach the summit of the mountain this year. The folks in the Opelika metro area simply want to take some positive steps. The other thing that differentiates Malzahn's scheme? He's going to run the ball a lot more than people realize. And that's what Auburn does right. And I hate that. Because I hate Auburn.

23. Houston Nutt as the hunted. One of the groupthink proverbs that's gained a lot of traction this offseason is the idea that "Houston Nutt never does well as a frontrunner." This season will severely test that conventional wisdom as an easy schedule, a veteran quarterback, and reasonable depth along the lines ought to make anything less than 9-3 disappointing for the Rebel faithful.

22. Jordan Jefferson. LSU went through quarterbacks in 2008 the way Monte Kiffin goes through blood pressure medication. Which is to say, in heaping handfuls and with a chaser of bourbon. I kid, I kid. About Kiffy, Sr. that is. LSU really never had anybody seize the reins, until Jefferson put together passable performances in losses to Ole Miss and Arkansas before helping to light up Georgia Tech in the Chick-Fil-A Bowl. While true freshman quarterback Russell Shepard will certainly get the headlines, Jefferson seems to have turned a corner during bowl practice last year. He could be headed for a big year if the Bayou Bengals' offensive line gels and a thin receiving corp finds some steady contributors.

21. Marlon Brown. Darius Dawgberry asked me about this time last year what the big deal was about this kid from Memphis. I told him at the time that the big deal was that we didn't have a single big receiver capable of going up and getting the ball, even against good coverage.  And Marlon Brown did that better than any receiver in the southeast, and possibly the country. At the time I had no idea that A.J. Green would demonstrate the ability to "go get it" in only a few short weeks. Now A.J. Green will be the veteran and it falls to Marlon Brown to be the freshman who takes some strain off of him. Sure Mikey Moore and Tavarres King look to be big contributors. But Mike "Goalline Fade" Bobo should be giddy about having two big guys who can stretch the defense vertically and open up seams down the middle by splitting the safeties.