Texas Linebacker Sergio Kindle Hits Like a Ton of Bricks.

Just ask the folks at the Jefferson West apartments in Austin. At some point early wednesday morning the senior Longhorn linebacker appears to have been texting behind the wheel and managed to drive into the apartment of UT student Ashley Zapata. Said her roommate "She would be dead if she had been sitting at her desk."

But, like most college students in Austin, she was not home at 1:30 a.m. on a wednesday morning. For this her parents should be thankful. If the poor girl were a student at Rice she might have been seriously injured. Kindle was not too seriously injured in the wreck to push his car out of the apartment and back down the street, then go home to get some rest, according to his lawya' Brian Roark. Actually, Roark appears to be a proper lawyer, quite possibly one hastily retained to explain things to the Austin authorities. Roark did just that, explaining that after the incident his client "knew he was hurt at the time and that he needed to go home and go to bed." Not call the cops. Not go to the E.R. Get some rest.

Now, "going home to get some rest" sounds a lot like "leaving the scene of a serious accident" to me. And I seem to recall hearing that going to sleep is about the worst thing a concussed person can do. Other than getting concussed again. It is the best thing you can do after a night of drinking. And Kindle has had a previous visit from the D.W.I. fairy (who, for reference, is a dead ringer for Jerry Glanville with a wand that looks a lot like a Pabst Blue Ribbon bottle), so at least so far as the Court of Public Opinion goes, this may not have been a great move. Put another way, I don't know what Kindle did, but I know what it sounds like. Amazingly, ESPN reports that leaving the scene of a vehicle/building collision may not be against the law in Texas. This is however the sort of thing that any self-respecting NFL GM in a post-Donte Stallworth world will likely place near the front of his mental rolodex. Al Davis on the other hand is intrigued by the young man's decisionmaking ability, and the various members of the Rankin Smith family may try to buy the Falcons back just for the chance to draft him. Assuming he's slow enough.

Now, as a Georgia football fan I cannot seriously chide any program for vehicular hijinx. Because in Athens we've dang near cornered the market. But really, the only reason for posting this is that it was a conspicuous excuse to also post a picture of Kindle's car*, precrash: 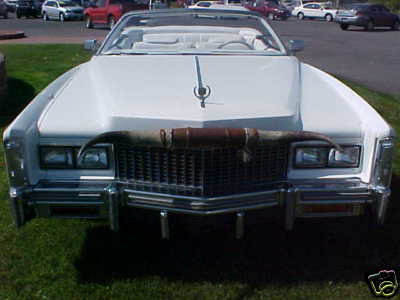 And the absolute best part of the story? The piece de resistance? The car, at least according to one report, was registered to Kindle's father . . . . . . . . Johnny Walker.

What can I say? When the world of college sports serves up a high soft one, we here at Dawgsports like to swing from the heels. Until tomorrow, keep it between the lines Sergio, and . . .

* Not really Sergio Kindle's car. Life couldn't possibly be that poetic. This is Mack Brown's car.