A Welcome College Football Comeback: The Restoration of the T Formation

Share All sharing options for: A Welcome College Football Comeback: The Restoration of the T Formation

This posting is a few days out of date, but I have been busy being contrary (and, to hear some people tell it, also running onstage at Britney Spears concerts), so I’m only just now getting to it.

Recently, War Eagle Atlanta listed several things that should make a comeback in college football, including the wishbone. While I am in favor of bringing back a venerable offensive scheme, I prefer to go a bit farther back than the ‘bone and pluck this from the dustbin of history: 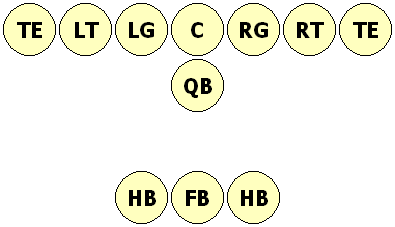 The T formation drove the single wing into obsolescence and opened up aerial attacks in the years in which the forward pass truly came into its own. For a while, the T formation dominated the game at all levels by enabling Minnesota to win five national championships, Oklahoma to go on a 47-game winning streak, and Chicago to win the 1940 N.F.L. championship game by a 73-0 margin that continues to be hailed in the Bears’ fight song: "We’ll never forget the way you thrilled the nation with your T formation."

The T formation, from which the wishbone later evolved, transformed the quarterback from a blocking back to the signal caller we know him as today. This seems rudimentary to us now, but, at the time, it was a novel idea to have the quarterback take the snap from under center and drop back so he could either pass or hand off to one of the running backs, who would have room to spot the hole and build up steam.

In Georgia’s heyday under Wally Butts, every Saturday was Blackout Saturday.

Coach Butts seldom gets his due today, but he was an offensive innovator whose passing attack yielded impressive results. (After installing the T formation in 1943, Coach Butts went 8-0-1 against the Plainsmen from 1944 to 1952. With all due respect to War Eagle Atlanta, I hate Auburn.) When the T formation gave way to the split T, Coach Butts adapted, but he insisted upon calling his version of the split T "the sliding T" because he, like Mike Leach years later, had installed wide line splits before it was in vogue. The "sliding" to which Coach Butts referred was the quarterback sliding along the line as he decided whether to keep the ball or pitch it, a maneuver which eventually gave way to the triple option.

When Vince Dooley became the head coach at Georgia, he often drew unfavorable comparisons to Coach Butts. Coach Butts introduced the silver britches; Coach Dooley changed the uniform to feature white pants instead. Coach Butts was an outgoing raconteur; Coach Dooley was aloof. Coach Butts ran a wide-open attack offering the option to run or pass from the Bulldogs’ base formation; Coach Dooley preferred to stick strictly to the ground game. The "run it between the tackles" approach that most of us think of as traditional Georgia football was, in fact, a stark departure from the sliding quarterback play and high-flying aerial assault of Coach Butts’s T formation.

In for a buck, in for a bundle, I say. If we’re going to do as War Eagle Atlanta suggests and go back as far as the wishbone, let’s go back a bit more and install the offensive scheme that gave birth to the ‘bone. If you’re looking for the approach that allowed the offense to run it between the tackles, pitch it out to the edge, and pass the ball effectively, we’ve got your formation right here in the Classic City.

That’s a formation with a capital "T" and that rhymes with "V" and that stands for "victory." At least, it did in some of the best days in the history of Georgia football.