Share All sharing options for: How We're Going to Get Erk Russell in the College Football Hall of Fame

This isn’t even an example of Kyle getting contrary, because we’re all in agreement. Tony Barnhart agrees, C&F agrees, and vineyarddawg agrees that Erk Russell belongs in the College Football Hall of Fame. 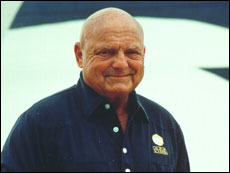 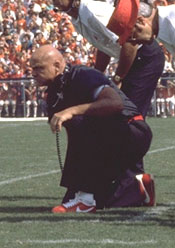 So why isn’t he there already? Take it away, Tim Tucker:

Seems the Hall of Fame has a rule requiring that one be a head coach for at least 10 years to be eligible for election.

In that time, he compiled an 83-22-1 record and won three Division I-AA national titles.

All of that at a school that hadn’t fielded a football team in 40 years.

All of that after 17 inspiring years of coaching Georgia’s "Junkyard Dawgs" defense.

And Erk Russell is not in the Hall of Fame because he wasn’t a head coach long enough?

As one of my e-mails said yesterday, that is a rule crying out for an exception to be made.

Not to quibble, but Coach Russell was the head coach at Georgia Southern for nine years. His last game as the Bulldogs’ defensive coordinator was on January 1, 1981. The press conference announcing his hiring as head coach in Statesboro was held on May 26, 1981. His first day on the job was July 1, 1981. Although the Eagles didn’t field a team until the 1982 season, Coach Russell spent the interim building a football program quite literally from nothing. On the day Coach Russell was introduced as Georgia Southern’s head coach, athletic director Bucky Wagner had to go out to the local K-Mart to buy a football to hand Coach Russell at the press conference. Until the morning of the day Erk’s hiring was announced, the school didn’t own a football. What Coach Russell spent 1981 doing was a whole heck of a lot more impressive than the rebuilding efforts of most first-year coaches. 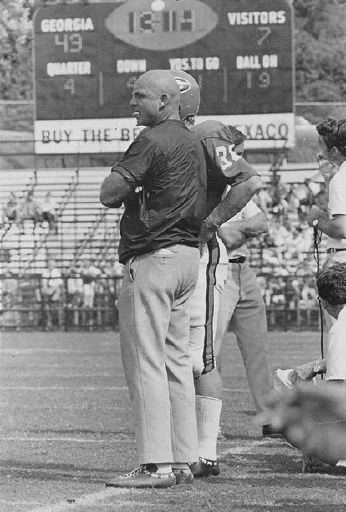 Still, irrespective of whether we count 1981, Coach Russell spent fewer than ten years as a head football coach (unless we count his time as the head coach at Grady High School, of course), so he can’t get in without some sort of waiver. How would that work, exactly?

The College Football Hall of Fame is administered by the National Football Foundation, a member-supported non-profit organization. Potential inductees into the Hall of Fame are brought before screening committees arranged by districts. It would appear that Coach Russell would be considered by the District 2 screening committee, whose members (at least as of the last time the website was updated) are as follows:

Prior to the submission of a candidate’s name to the appropriate screening committee, these procedural steps must be taken:

Nominations may be made by any dues-paying member of the National Football Foundation, or by athletic directors, coaches, or CoSIDA members representing dues-paying colleges or universities. . . .

A coach becomes eligible three years after retirement or immediately following retirement provided he is at least 70 years of age. Active coaches become eligible at 75 years of age. He must have been a head coach for a minimum of 10 years and coached at least 100 games with a .600 winning percentage*.

*Those players that do not comply with the 50-year rule and coaches who have not won 60% of their games may still be eligible for consideration by the Division I-A and Divisional Honors Review Committees, which examine unique cases.

Now, I’m a strict constructionist, so I’m not fond of the fact that provision is made for giving consideration to coaches who do not meet one of the criteria (a .600 winning percentage), as the fair implication of that rule is that coaches who do not meet the other enumerated criteria (one of which is a minimum of ten years as a head coach) cannot be given special consideration.

Simply stated, the rules were bent for Jim Donnan, and even Coach Donnan’s supporters have to admit that he was neither half the coach nor half the man that Coach Russell was. The first deviation sets a precedent for the next one; for me, that’s a concern when the U.S. Supreme Court is taking Constitutional provisions out of their historical context, but it’s also an opportunity when a one-time change made for a dubious candidate opens the door for a similar stretch to be made on behalf of a much more worthy contender . . . who, by the way, if Tim Tucker’s math is correct, coached beyond the 100-game minimum in less than a decade, which ought to be a point in Erk’s favor.

What does that matter, though, until a dues-paying member of the National Football Foundation places his name into nomination? 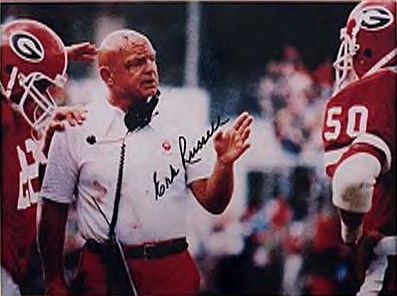 Oh, I almost forgot . . . you don’t have to have football experience to become a member. You just have to find your local chapter---like, say, the University of Georgia (Athens) Chapter---and download the .pdf application, then submit the completed form with a check.

This morning, I placed my application for membership in the National Football Foundation in the mail.