It Should Be In The Game: 7 Things I Wish Were Going To Be A Part of EA Sports's NCAA Football 2010.

Share All sharing options for: It Should Be In The Game: 7 Things I Wish Were Going To Be A Part of EA Sports's NCAA Football 2010.

As you've probably heard by now, former college quarterback Sam Keller has sued the NCAA, claiming the organization used his likeness (and those of thousands of other college football players) without compensation or permission.

Now, there are myriad reasons why this suit might founder in court. But let's forget about all that for a moment. Let's acknowledge the premise that I think all of us can agree on: the pixelated #14 with red hair quarterbacking the University of Georgia is meant to make you think of Joe Cox. In a sense, it is Joe Cox.

Now, if we're willing to grant that premise, I think we open the door to exciting gameplay possibilities. Because if we're going to mimic the players' and coaches' physical characteristics, why not mimic other things about them? The list of choices is both long and intriguing, but I managed to narrow it down to 7 gameplay features that should be in the next NCAA Football video game, including:

The Willie Martinez "two thumbs up" gesture. After the 'Dawgs' defense forces a key stop in the game, I think Pixel Willie ought to flash his patented gesture on camera. If I'm not going to get to see it for real inside Sanford Stadium, I think I should at least get to see it on the video game. 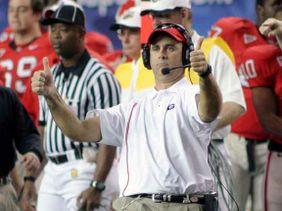 Chris Rainey's white girls. In case you missed it, Florida tailback Chris Rainey is a fan of the white girls. So, when Rainey scoots into the endzone to make the score in The World's Largest Outdoor Cocktail Party Georgia 88, Florida 6, I think he should be greeted by a shrieking phalanx of Kappa Kappa Gammas holding a banner reading "Rainey for Heisman!" on one side and " White girls for Rainey!" on the other. If one of them looks exactly like Erin Andrews I don't think anyone's going to complain. Except maybe Erin Andrews.

Mike Leach Thought Bubbles. Just picture it. The Texas Tech quarterback lofts one into the corner of the endzone for his sixth touchdown pass of the game. The camera pans over to Coach Leach, who's busy weighing several of the lesser known critiques of Keynesian economics, and reflecting on why exactly he loves pineapple salsa so much. You know that's how it really happens in Lubbock.

LSU fans. Real ones. If the Bayou Bengal fans aren't setting things on fire, bleeding, or throwing glass, then the folks at Electrinic Arts need to be shot. And in Baton Rouge, that's not beyond the realm of possibility. Seriously, just show up with cameras to record some of the Death Valley hijinx, then put it in the game. The additional  upside is that this footage will give them a head start on the new shoot 'em up game "Columbian Freedom Fighter: Machetes, Jumper Cables and Glory ."

The Ghost of Bear Bryant. A shadowy Daniel Moore-esque Bear Bryant should be stationed near Nick Saban at all times. Imagine for a moment ghostly Bear cursing every Greg McElroy interception. Ghostly Bear screaming at Terrence Cody to put down the sandwich. Ghostly Bear buying a pit bull and some blow from Jimmy Johns. Ghostly Bear blowing smoke from an unfiltered Chesterfield into the face of a confused and frightened Gene Chizik. Ghostly Bear urinating on Penn Wagers' shoes after a particularly awful call. Don't laugh. Half of you would do the same thing if you were an apparition stuffed to the gills with George Dickel. Don't even try to deny it.

Jim Delaney. The man. The myth. The target.  If it were possible to bean the Big Ten commissioner with a football Varsity Blues style, I might consider playing with Purdue just to try it.

Houston Nutt Sideline Interviews. What would video game Houston Nutt say after upsetting Florida in the Swamp? Hell, who knows? That's the fun part. Would he push Enrique Davis for the Heisman? Pimp Jevan Snead for Ambassador to Uruguay? Both?

Feel free to propose your own in the comments. Until Free Form Friday . . .