Thus we present Free Form Friday. Until further notice, I'll spend Fridays posting a vaguely organized compendium of non-sequiturs, pop culture observations and college sports miscellany which you may discuss in the comments, or ignore in favor of your own topics. Think of it as your weekend open comment thread.

As Westerdawg notes, Matthew Stafford's life does not suck at the moment. Stafford recently got a makeover from tennis star Maria Sharapova, was a guest on the Late Show with Dave Letterman, has his own song catalog, and there was something else . . . oh yes, signed a contract guaranteeing him $41.7 million. And to think, we knew him when he was just a boy with a keg, a frosting gun and a dream . . .

Speaking of kids making poor judgment calls, I'm not sure I trust the judgment of any kid who commits to play for Gene Chizik just because he shows up in a white stretch limo. In fact, I know I don't trust the judgment of the parent/coach/advisor who doesn't slap the back of the head of the kid who offers that as a rationale for attending Auburn. But if it creates some excitement and gets the WarPlainsTigerSociologists in the door, I'd say it was worth the rental. Tacky as all getout. But worth it. It's certainly not as bad as the time Houston Nutt showed off a replica of the Batmobile to Atlanta cornerback Ahmad "Batman" Carroll. Carroll, you'll recall signed with Arkansas. He was last seen in Terrance Edwards' rearview mirror during the 2002 SEC Championship Game.

Gene Chizik might as well be Bobby McGee. Because freedom is truly just another word for nothing left to lose. And with Nick Saban running rampant through the Yellowhammer State conscripting every high school football player he wants, Chizik has been at that point from day one on the job. He should at least get points for thinking outside the box.

And speaking of thinking outside the box, there has been much talk in the Georgia Bulldog blogosphere recently about neutral site football games, and Damon Evans' refreshing propensity for scheduling out-of-conference opponents from BCS Conferences. Last season's fete in Tempe with Arizona State stands as a shining example. As I noted when Kyle addressed the issue earlier this week, every Bulldog fan whom I've spoken with who attended that game had an absolute blast, and I think that is probably one more reason why we have no business playing another neutral site game right down the road from Sanford Stadium. If we're going to take the show on the road, let's take it on the road.

But that discussion got me started thinking about another question: If I could go on the road to watch the Bulldogs play football against any opponent in any college football venue in the country, who would it be, and where? I think the answer is a product of the quality of the football contest at the center of the trip, but also the peripheral considerations of weather, venue, and surrounding attractions.

There are several good candidates. I wouldn't mind seeing the 'Dawgs take on Mack Brown's Texas Longhorns in Austin. For one, Texas is a premier program with a several natural links to ours. But mostly, I just want an excuse to go back to Austin. It's one of my favorite college towns, hands down.

USC at the Rose Bowl would probably be on the list, though I'm far less fervent in my desire to visit L.A. I almost feel that given the status of USC football under Pete Carroll, I have to put them on the list. But I'd much rather play the Trojans in Baton Rouge and let the LSU fans throw stuff at both teams. Like the movie Gladiator, with shoulderpads. 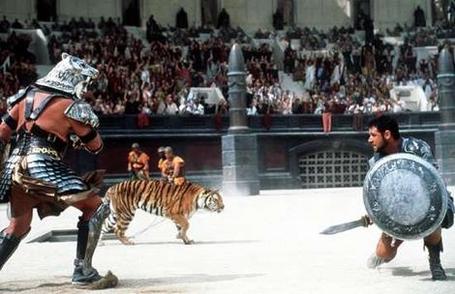 I imagine a neutral site game with the USC Trojans in Baton Rouge would look something like this, except Russell Crowe would have red hair and the tiger would be gnawing on a corndog or some tasty fried gator tail. But other than that, this is a fair and accurate representation.

And I wouldn't mind watching a contest between Georgia and North Carolina in Chapel Hill. Butch Davis is building a strong squad that will likely get better as the talent cupboard continues to refill, and Chapel Hill in October is among the prettiest places in the country. It would be a fairly easy road trip, too.

And speaking of travelling to North Carolina, I leave you this afternoon with Widespread Panic performing "Driving Song" in Raleigh last year with Ann Marie Calhoun, probably the best fiddler you've never heard of. Funny how the world ties together sometimes, isn't it?