You'll recall that back on Friday I said there would be a recruiting piece forthcoming on Saturday. This utterly premature evaluation of Georgia's 2010 quarterback recruiting was the item in question. I thought I had it all figured out, at least until perhaps Georgia's top QB target and the guy most likely to commit to Georgia both committed elsewhere. Thus began the rejiggering (and delay) of the recruiting piece.

I know, it seems too early to be seriously worrying about the class of 2010 anyway. I agree. We here in Bulldog Nation have plenty of other things to worry about. A baseball team off to a promising start. A basketball team with an uncertain future. A spring football practice featuring a tailback battle, a defense searching for redemption (and cornerbacks), and The Ginger Assassin under center. But as you've probably noticed, this recruiting business is neverending now. And while the thought process of recruits considering their college options isn't that much different than it ever has been (hint: close to home + successful program + appealling depth chart = recruiting win), the machinations are now a lot more out in the open.

To that end, I'd like to direct you to a recent article by UGASports.com's Kipp Adams which discusses the effect the spread offense has had on college quarterbacks entering the NFL Draft. The premise which Kipp notes is nothing new. Smarter folks than me have pointed out that NFL scouts' collective reaction to "spread quarterbacks" goes beyond skepticism. It is almost angry. They see Matt Stafford and Mark Sanchez as potential stars, but Texas Tech's Graham Harrell as the next incarnation of Alex Smith.

But one thing that Kipp explores is the premise that high school quarterbacks who seriously want to play in the NFL are paying attention to what the NFL-types think of various college offenses. And as Adams notes, both groups seem to like what they see in Athens. If Matt Stafford does in fact get thrown to the Lions with the first overall pick in this month's NFL Draft, it won't hurt us in quarterback recruiting, that much is for sure. As far as I know, Georgia has extended 6 offers to high school quarterbacks for the class of 2010. They are:

Nick Montana, Westlake Village, CA (Oaks Christian) (h/t CAJason80): Yes, he is the son of that Montana. And according to the Adams article, he likes the fact that Georgia runs a pro-style offense and Mark Richt has successfully put quarterbacks in the NFL. He and his father recently visited Athens and seemed to enjoy it. However, his older brother Nate is already a walk-on quarterback at Notre Dame, their father's alma mater. Nick's two older sisters also attended Notre Dame. The elder Montana recently toured Japan as a goodwill ambassador for the Irish. In other words, Notre Dame should be considered the prohibitive favorite for Nick Montana's services until we're given a reason to think otherwise.

Montana is a lot like his famous father. He doesn't have ideal size. He doesn't have the strongest arm in the country. He doesn't run a 4.5 forty yard dash. He's just effective. As a junior Montana completed 55% of his passes 133 of 241)  for 2404 yards and 33 touchdowns versus only 7 interceptions. That's roughly 10 yards per pass attempt, a good benchmark for signalcaller efficiency. Montana also didn't even start playing football until he was in high school, so you have to believe he's got some room to get better if he'll just listen to what his old man tells him (boy, how many of us could say the same thing?).

Phillip Sims, Chesapeake (VA) (Oscar Smith H.S.): No, he's not the son of that Phil Simms. Sims will likely get painted with the "mobile quarterback" brush, much like D.J. Shockley did. As with D.J., I'm not sure that's either particularly fair or terribly accurate. I cannot stress enough: the fact that a quarterback is able to elude sack-happy linebackers and occasionally run the quarterback draw does not make him a "mobile quarterback" any more than a wide receiver with the ability to get open downfield in single coverage is a "mobile receiver". Mobility at the college level is a requirement, not some sort of bonus. 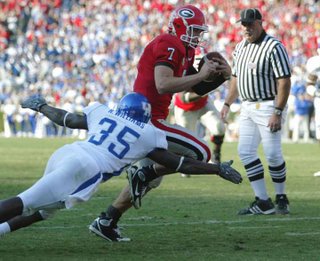 Yeah, tell this guy he isn't  a "mobile quarterback".

Sims has offers from not only Georgia, but also Alabama, Clemson, Kentucky, Tennessee, Virginia Tech and a host of others. Georgia targeted Sims early, though obviously Virginia Tech will probably be a big player in this one. Sims's high school teammate Jerod Askew signed with Tennessee in February, for what that's worth. The film I've seen of Sims makes me think that he has a very good though not great arm, and is accurate despite less than stellar mechanics. He has a "windup" delivery that takes too long and will need work at the college level.

Jake Heaps, Sammamish, WA: An early leader to be the top west coast signal caller in the class of 2010. Has offers from everybody in college football and their great uncle Dick (by which, of course, I mean Rich Brooks). The rumors around the internet are that he's unlikely to leave the western third of the country, and that's not surprising, really. Washington's Steve Sarkisian has all but camped out under his windowsill, and Jeff Tedford would adopt him if given the chance. BYU's Bronco Mendenhall is quietly stalking him and waiting to pounce. For my money, Heaps is the top quarterback in the class of 2010. He has good enough size (6'2, 195 lb.), but has excellent footwork, a flawless throwing motion, and a very strong arm. My guess is that he ends up at BYU, if for no other reason than that Heaps is, "LDS and proud of it" according to his Myspace page*.

Blake Bell, Wichita, KS (Bishop Carroll): Rumored to be "advised" by Mike Butler, the same guy who "advised" Bryce Brown right out of his offer from Miami, who and may or may not be completely on the up and up. Prototypical size for a drop back quarterback. Reminds me a lot of Zach Mettenberger, only with better feet and perhaps less arm strength. I thought he was perhaps our top target, but over the weekend Bell committed to Oklahoma. He's another one of those "mobile" quaterbacks, who like Aaron Murray didn't even play quarterback until his junior season. In that one season he completed 64% of his passes for over 2800 yards, 34 touchdowns, and only 8 interceptions. Impressive.

Blake Sims, Gainesville (GA): Perhaps the top quarterback prospect in the state of Georgia. The Bulldogs offered, saying they would give him a shot at quarterback first, though he might end up at safety. Sims surprisingly committed to Alabama over the weekend, even though as recently as Friday he'd not even listed them in his top 3. Given the sudden nature of the commitment, I'm not sure this one is over. Sims's commitment is notable if for no other reason than the fact that it might influence the decision of his main target (and one of UGA's), Tai-ler Jones.

Jeffrey Godfrey, Miami, FL (Miami Central): Threw for nearly 3000 yards as a junior, having started since his freshman season. At only 5'11 and 167 pounds, height and weight are an issue. But Godfrey has a strong arm, throws a nice deep ball, and is incredibly elusive. He also seems to have a very good feel for the game, likely due to his significant onfield experience.

Godfrey has offers from not only Georgia, but also FSU, Miami, Michigan, Oregon and Tennessee. As with all Miami area kids, he's a Miami fan and it's likely he'll go to Miami. But then again Rantavious Wooten didn't, so who knows?

So what can we glean from the above? One lesson is that Mark Richt and Mike Bobo are not going to offer quarterbacks indiscriminately. They seem to have identified the guys who meet their criteria, and will take one of them if possible. With Logan Gray looking good this spring and Aaron Murray and Zack Mettenberger behind him on the depth chart, we don't desperately need a quarterback for 2010. In fact, if either Murray or Mettenberger emerges this fall and plays as a true freshman, it might be beneficial on the long run to have a year of separation at the position.

Bottomline: if we sign a quarterback in the class of 2010, he'll be a good one. If we don't, there's really no reason to get bent out of shape about it. The available scholarships for this class are limited and we have other more pressing needs (defensive end, cough, wide receiver, cough, cough . . .).

* Yes, I just linked you to a 17 year old's Myspace page. It's not like I'm proud of this, but never let it be said I won't go the extra mile to bring you the recruiting coverage you won't find just anywhere.