Shelby Foote lived a large portion of his earthly life in Memphis, so I suppose it is only appropriate that Saturday’s showdown with Tennessee featured the structural symmetry of one of Foote’s novels. As with the ordered story arcs of Follow Me Down (as outlined in Jay Tolson’s The Correspondence of Shelby Foote and Walker Percy) and Love in a Dry Season, the Diamond Dogs’ win in their second game in Knoxville adhered to an arrangement Foote would have described using the name of a Classic City landmark (an arch) and was symmetrical in the way that architects would characterize, appropriately, as "Georgian."

The literary perfection of Saturday afternoon’s outing began with a scoreless first frame that mirrored exactly the scoreless ninth stanza. Successive two-out walks by Rich Poythress and Bryce Massanari were made moot when Chase Davidson struck out in the top of the canto and the Volunteers went three up and three down in the bottom of the inning.

The second stanza, like the eighth frame, was the property of the home team, as Tennessee blanked the visitors and outscored Georgia in the inning immediately following the first one and in the canto immediately preceding the last one. The Red and Black went in order in the top of the second frame, whereas the Big Orange turned a Blake Forsythe walk, a Cody Brown double, and an Alex McRee wild pitch into the contest’s initial run.

Once Kentrail Davis had gone down swinging, Tyler Horne sent an R.B.I. groundout to short. Two more bases on balls ensued, but one of the beneficiaries of those unintentional walks, Zach Osborne, was picked off to end the inning. There began the middle five innings, during which the Diamond Dogs dominated in precisely ordered fashion. During that five-canto period, Georgia outscored Tennessee 4-0 in the first two frames (the third and fourth), Georgia outscored Tennessee 4-0 in the last two stanzas (the sixth and seventh), and the Volunteers scored only in the middle inning (the fifth).

It all began in the top of the third inning, which opened with consecutive singles by Michael Demperio and Johnathan Taylor. Matt Cerione reached on the fielder’s choice that put runners at the corners and Poythress drove a three-run shot to left field before the next two Bulldog batters registered outs. The home team’s only baserunner in the bottom of the canto came when Cody Hawn was plunked with two outs. 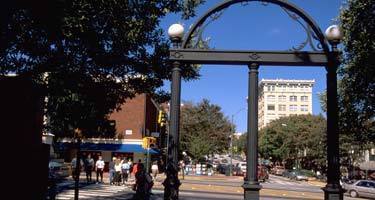 For the visual learners among you, the Arch provides a tangible representation of the symmetry of this game.

Joey Lewis led off the visitors’ half of the fourth frame with a home run to left field, after which the Classic City Canines alternated groundouts with singles for the remainder of the inning. No Volunteer reached base in the bottom of the stanza. The top of the fifth frame opened with a Poythress walk and a Massanari single before the next two batters were retired.

Colby May then parked a home run over the left center field wall to plate three and Levi Hyams drew a walk before the Red and Black’s turn at the plate concluded. Jarred Frazier and Osborne received free passes to first base at the outset of the bottom of the canto, after which Josh Liles moved both men into scoring position on a groundout. Once Cody Grisham drew the walk that loaded the bases, Michael Palazzone was brought in from the bullpen.

Although Hawn’s sacrifice fly brought Frazier home, Forsythe struck out swinging to keep the Georgia lead at 7-3. A leadoff walk by Taylor and a one-out home run by Poythress added two to the Bulldog tally before the top of the sixth stanza was concluded by a groundout and a strikeout. Brown’s leadoff single in the home half of the inning went for naught when the next three Volunteers carded outs, including one by Horne on a batter’s interference.

Lewis began the top of the seventh canto with a double down the left field line and May followed that up with a single. Hyams sacrificed both baserunners over, and, after Demperio struck out, Zach Cone carded the hit that scored a pair of runs before Cerione flied out to end the visitors’ turn at bat. Two-out singles by Grisham and Hawn amounted to nothing when Forsythe fouled out to strand runners at both corners.

The symmetrical five-inning stretch during which Georgia had outscored Tennessee 11-1 having ended, the Volunteers duplicated the dominance of the second stanza by owning the eighth frame. Peter Verdin recorded a one-out single in the top of the canto, but the teammates who followed him in the batter’s box added only outs, allowing the Big Orange to commence their big inning.

For the visual learners among you, the Arch provides a tangible representation of the symmetry of this game.

Davis dropped a one-out double into center field in the home half of the frame. Mike Hornsby scored him with a single up the middle, then back-to-back base hits by Charley Thurber and Osborne brought Hornsby home, as well. Jeff Walters took over on the mound, only to walk Jeff Lockwood, surrender a two-R.B.I. double to Grisham, and give up a two-R.B.I. single to Hawn.

Next to take the hill for the Classic City Canines was Will Harvil, who struck out Forsythe and extracted a pop-up from Davis after Brown reached on a Georgia fielding error. With the score now 11-9, the orderly progression of the outing demanded a quiet ninth canto that duplicated the scoreless first frame.

The visitors’ half of the final stanza consisted of May being plunked and his teammates notching outs. Dean Weaver was given the responsibility of ensuring that chaos was not allowed to disrupt the structural perfection of the game, but something was out of kilter: Georgia led by two runs but Georgia also led by three hits.

That simply would not do, so, after coaxing a flyout from Hornsby and walking Thurber, Weaver conceded the single to Osborne that brought the margins between runs (11-9) and hits (13-11) into alignment. Having thus established balance, Weaver elicited flyouts from Lockwood and Grisham to clinch the series for the Diamond Dogs.

Colby May and Rich Poythress, as usual, continued to deliver at the plate, together going four for seven with two walks, eight R.B.I., and a trio of home runs. Joey Lewis added to the tally with a two-for-five performance including a double and a home run. Although he walked six and made it only into the fifth inning, Alex McRee struck out five, gave up one hit, and allowed only three earned runs. Although Tennessee made a game of it, the Red and Black held on for the victory, not just in Saturday’s contest but in the weekend series as a whole, and, in so doing, they told a story whose balance and structure would have made at least one Southern literary great proud.