"That Just Happened!": Five Reasons for the Georgia Bulldogs' 2008 Collapse

Share All sharing options for: "That Just Happened!": Five Reasons for the Georgia Bulldogs' 2008 Collapse

The Super Bowl is behind us, which means football season is over in every form. Ladies and gentlemen, the offseason is upon us, which means it is time for reflection and for wrestling with such thorny questions as that recently (and regrettably) posed by C&F at Team Speed Kills; namely, "What happened to Georgia?" Writes C&F:

As one of the posts I'm working on for the last week or so of season-in-review pieces, a question for all of us to ponder, and I'd like your feedback:

What happened to Georgia?

This was, let's remember, a national title and SEC East contender that finished 10-3 with ugly losses to Alabama and Florida and a heartbreaker to Georgia Tech. The Dawgs' best win is, what, a 24-12 bowl win over Michigan State?

I'm not saying this to tear down Georgia, though doing so has never bothered me. I was on the bandwagon, too; I had them No. 1 preseason.

So was it the injuries, particularly those on the line? Or was there something wrong that some of us (self included) just didn't see before the season began.

Your thoughts are welcome.

As you might imagine, I have some pretty strong opinions upon this subject. I offer the following answer to C&F’s question, in five parts:

1. We were overrated. The Bulldogs’ strong finish in 2007 made us all forget the fact that, between October 29, 2005, and October 6, 2007, Georgia went 16-9 overall, 8-8 in conference play, and 2-7 against the S.E.C. East. All of us were unduly impressed by the sight of the ‘Dawgs hanging 42 points on a defenseless Florida club that also allowed 37 points to Kentucky and 41 to Michigan, as well as by the Sugar Bowl shellacking of a Hawaii unit that surrendered 44 points to Louisiana Tech. We weren’t as good as we looked in 2007, so we weren’t as good as expected heading into 2008.

2. The team bought into the hype. Not once all season long did the Red and Black play a complete 60-minute game in all three phases. Georgia won some games the Bulldogs had no business winning on the strength of great individual efforts---A.J. Green’s late touchdown catches against Kentucky and Auburn spring to mind---but there was never a point at which everyone on the field clad in silver britches looked like a member of a team, much less a national championship team. No. 1 got into their heads, but never made it onto the field. 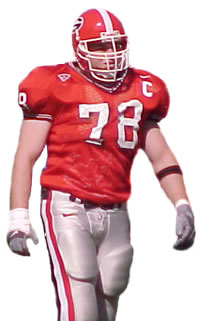 Where have you gone, Jon Stinchcomb? Bulldog Nation turns its lonely eyes to you, woo woo woo.

4. This was the worst coaching job by the Georgia staff during the Mark Richt era. In 2002, the Bulldogs improved, going from squeaking by in the first half of the season to shutting down opponents after intermission in the second half of the season. In 2007, the Red and Black obviously finished much stronger than they started. The 2008 club never got better. The team that lost to Georgia Tech wasn’t any better than the team that beat Georgia Southern. Adjustments never got made. Such persistent problems as personal foul penalties, poor tackling, and ill-conceived kickoff strategies never got corrected. It was a season spent spinning our wheels without ever improving.

5. The Bulldogs were beset by injuries to a ludicrous degree. I list this one last because I believe it is the least important component of an explanation that exposes deeper problems in need of addressing. Nothing I saw in the first half against Alabama, in the second half against Florida, or in the third quarter against Georgia Tech leads me to believe that a fully healthy Georgia squad would have won any of those games. That said, the ‘Dawgs suffered from a rash of critical injuries, most notably the losses of Jeff Owens, Trinton Sturdivant, and Vince Vance. I would argue that this team lacked the heart and character of a champion, but, after all the injuries, the Bulldogs undoubtedly lacked the horses.

That, in a nutshell and in my opinion, is what happened. What do you think?